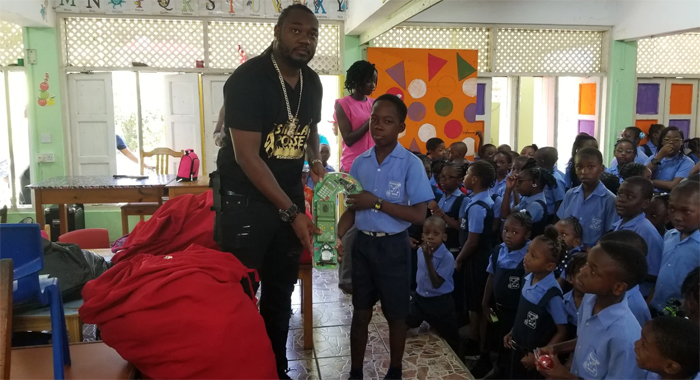 The newly formed Shella Posse Charity Organisation headed by soca artiste Recardo “Recka” Wilson has been very busy during the past Christmas season and into January.

Operating under the “Island Boy Entertainment Brand”, the organisation held its 5th annual “2 Christmas in 1” Charity event at the Stubbs Government School on Dec. 16, 2018.

As part of the programme the group was able to host a free Christmas party for many children at the Stubbs Government School and surrounding communities between Biabou and Brighton.

They were able to provide Christmas goodies to hundreds of children as well as to donate bags of groceries to many less fortunate individuals and families from Stubbs and surrounding communities.

The organisation continued its Christmas Charity programme during the month of January when it returned to the Stubbs Government School to deliver the remainder of 731 toys to the chidren who did not receive their toys over the Christmas season.

Shella Posse Charity Organisation, in collaboration with Sister Elizabeth Medford, then traveled to the St. Mary’s RC School and the Kingstown Evangelical Church Pre-School during January to make donations of school supplies, toys and cleaning supplies to those two institutions.

The group says its charity work will continue throughout this year as they move to different schools in the upcoming months to make donations to these learning institutions.

One reply on “Shella Posse charity continues to donate”