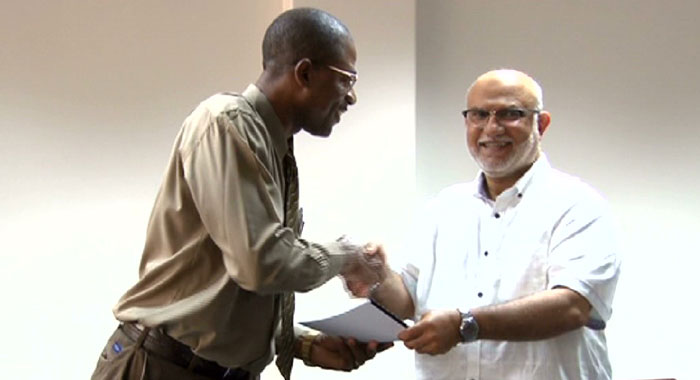 A major road rehabilitation will begin in St. Vincent and the Grenadines (SVG) soon following the signing in Kingstown, on Tuesday, of two major contracts by the Ministry of Transport and Works.

Permanent Secretary that ministry, Hudson Need, signed the contracts on behalf of the government of SVG for the construction of the national agricultural and feeder roads project and the feasibility studies and preliminary designs for the rehabilitation of the north Windward Coast Road project.

The consultancy for the feasibility project will be done by NARCO DIWI — a Kuwaiti firm and DIWI a British Caribbean firm in a joint venture arrangement as consultants on the project.

The firm was represented by Nabeel Abdul Raheem.

He said the Kuwait Fund gave SVG a loan of four million dinars, about EC$32 million, for the development of feeder roads and secondary roads in SVG.

He said the signing of the contracts indicate the beginning of the projects.

The consultants’ job, Francis explained, is to continue construction supervision. Funds are being paid directly from the source to the contractors and funds utilised locally will be for operation of Project Implementation Management Unit (PIMU) and some other local expenses.

Francis said when the initial tenders were submitted, the tenders were beyond the amount of the financing and it was then the job of the PIMU to sit with successful bidders and negotiate a downward figure.

“They have come in with a figure that is within our budget 32 million dollars EC value that we got from Kuwait to cover not just construction but expenses of PIMU consultants fee all that is included in the 32 million dollars,” the minister said.

He said the roads were chosen in order of priority.

There is a sister project to this which is funded by the OPEC Fund for International Development (OFID).

The US$18 million project will cover a larger amount of roads.

The project is expected to be completed in 32 months