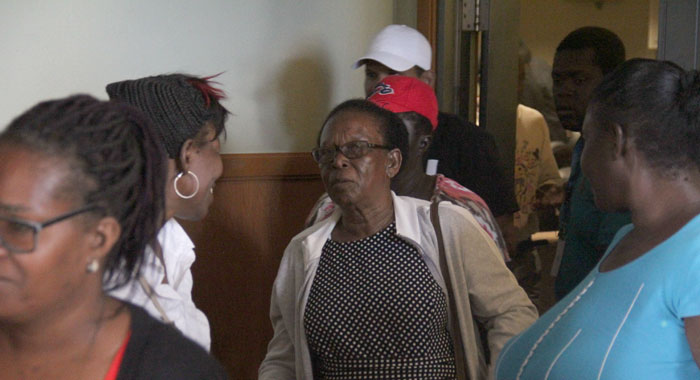 Esla Sam leaves the court on Thursday after testifying on behalf of the petitioner Benjamin “Ben” Exeter on Wednesday. (iWN photo)

Lawyers for the government, on Wednesday, successfully argued for the removal of segments of the testimony of Elsa Sam, a witness for the opposition in the Central Leeward petition.

Senior Counsel Douglas Mendes had made an application that certain statements in the witness statement of Elsa Sam be expunged from the record.

Mendes had based his application on the admissibility of the statement, arguing that the matters were addressed by Justice Esco Henry in a decision delivered on Nov. 18, 2018.

Lead counsel for the petitioner, Stanley “Stalky” John, QC, had resisted the application saying that Mendes was inviting the court to review the decision of another high court judge.

In his ruling, Justice John said he had looked at Justice Henry’s ruling that impugned statements are admissible.

Justice John further noted that in her final order, Justice Henry does not mention the statement referred to by Mendes.

The judge said the slip rule — which permits the correction of any accidental slip or omission in judgments or orders — was a procedure open to the respondent but it is too late for them to pursue that course.

He said he was also not persuaded to rely on, at that stage, the provisions of rule 420 of the Supreme Court, as Mendes argued.

However, the judge was persuaded by the arguments of Senior Counsel Anthony Astaphan, another lawyer for the government, who cited an election petition case in Antigua and Barbuda involving Jacqui Quinn-Leandro and Dean Jonas, et al.

Justice John he said he had found the learning there instructive and would allow the application and expunge paragraph 13 and 14.

“When the voter returned, Ms Jeffers would then stamp the ballot paper and write something on it.

“I was not sitting close enough to Ms Jeffers to see exactly what she wrote on the ballot paper. I could however see that she was writing on it.”

The judge said that in making the order he was in no way altering or attempting to alter the judgement of Justice Henry. “

At this point, the judge asked for Sam to be called to testify.

However, Mendes rose and said he was embarrassed to bring another such instance to the attention of the court.

He said it was drawn to his attention just before the judge had risen about an half hour earlier.

In that paragraph, Sam said:

“I observed the Presiding Officer — upon my returning my marked and folded ballot to her – lift the fold of the ballot at the right hand side and stamp it and sign it. I do not recall whether she signed and stamped on the counterfoil or on the ballot. … She pulled the flap up at least an inch high toward herself. It appeared to be opened wide enough that she could see for whom I had voted. I told myself that seeing that as I was an agent of the NDP she ought to have known how I would have voted and as such her action was strange.”

Mendes, citing Justice Henry’s judgment asked the court to excise from “She pulled the flap up” onwards.

Mendes said that while the judge had ruled that the last two sentences are inadmissible, her order did not reflect that.

Counsel John also resisted that application saying that like the last application, Mendes was relying on the order that Justice Henry made.

He said that that varying the judge’s ruling is the basis on which Mendes is asking the court to expunge sections of Sam’s evidence.

The lawyer was saying that if Justice John sees it fit to interfere with the judgment of Justice Henry, when the judge interrupted him and said he was not doing so.

“Are you inviting me, Mr. John to review the order I just made?” the judge asked.

Counsel john responded, “M’Lud, since your lordship is being asked to review order of the court–”

Justice John again asked, “Are you inviting me to review the order that I just made?”

“I am not going to do that,” the judge said.

“But your lordship has just reviewed the order of this very court in relation to the application made by my learned friend.”

“I am not reviewing the ruling that I just made. What I am dealing with at the moment is another application and I am prepared to hear your arguments on that,” the judge said.

Counsel John then told the court that that is the basis on which he is making the submissions.

“But it so happens that the bases on which both applications were made are the same,” he said.

He further told the court that since the judge has made a determination not to review his decision it “seems to me that it would be an exercise in futility because your lordship is likely to conclude that in reviewing, or hearing my submissions in relation to this more recent application, you would be reviewing the order that you made”.

The cross examination of Sam then commenced.