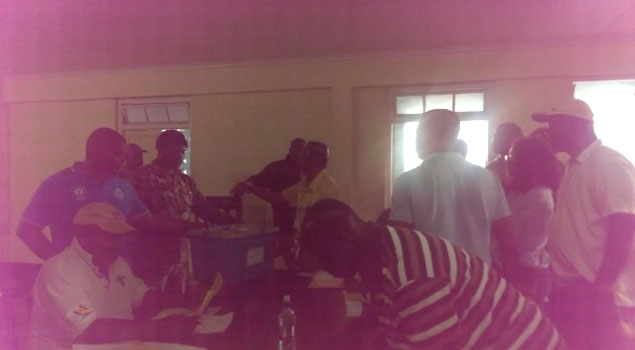 There was a dramatic development last Thursday, Day 4 of the election petitions trial, over what was being said and by whom in a video filmed during the counting of the vote in Central Leeward, on the night of the Dec. 9, 2015 general election.

Lawyer Maia Eustace, who was a roving agent for Benjamin “Ben” Exeter, filmed the video, which is 2 minutes 40 seconds long.

Exeter was the candidate for the main opposition New Democratic Party (NDP) and has brought a petition challenging the outcome of the vote in that district.

On Thursday, Senior Counsel Anthony Astaphan, a lawyer for the government in the case, recalled Exeter to the stand, one day after he had been cross examined.

Astaphan wanted to ask Exeter questions about the video which the court had had technical problems playing during the petitioner’s cross examination.

Lead counsel for the petitioner, Queen’s Counsel Stanley “Stalky” John told the court that he had no objection to Exeter being cross examined about the video.

In the video, a female voice, which Exeter said is Eustace’s, is heard telling Winston Gaymes, the returning officer for Central Leeward, that Gaymes had rejected, at another polling station, ballots that did not have the official mark or initials of the presiding officer.

She further tells Gaymes that they were now at a polling station in which none of the ballots had the initials or official mark of the presiding officer and he had decided to count them.

Exeter said he could not recall how far Eustace was from him but said that Gaymes was two or three feet away from him (Exeter) when Eustace spoke.

Astaphan said that after Eustace spoke about every ballot lacking the initials and official mark of the presiding officer someone said something.

He suggested to Exeter that that person said, “You did not object.”

“I didn’t say that,” Exeter said, and Astaphan told Exeter that someone else had made the statement.

Exeter said he did not hear that, adding that no one from his team said that.

Astaphan said that Eustace went on to say, “you have accepted” then someone else said clearly, “You didn’t oppose”.

Exeter, however, said he did not hear that.

Astaphan said that Eustace went on to say, “That result, you have confirmed it” and someone said again, “you did not oppose”.

Exeter maintained that he had not heard that and Astaphan said that as someone began to say, “you didn’t” Eustace said “that does not matter”.

Astaphan told Exeter that he (Exeter) was three feet away from the table when Eustace said that.

He asked Exeter what Eustace was responding to when she said, “that does not matter”.

“You should ask Miss Eustace that,” Exeter said, adding, “I don’t know.”

He said that he did not hear what Eustace said.

Astaphan, however, said that to speed up his cross examination, he is suggesting that on two occasions, after Eustace spoke about the ballot not having the initials and stamp, Gaymes said, “you did not oppose”.

“He said the count?” Exeter said.

Astaphan then asked for the applicable section of the video to be replayed and Exeter said, “Please.”

Astaphan then asked the technician to stop the video as soon as Eustace is finished speaking to Gaymes.

However, when the video was replayed, Astaphan asked Exeter if Eustace was complaining that Gaymes had counted ballots without the initials and the stamp when previously he had rejected them.

Exeter said that is the case and it was a complaint made in his presence.

Astaphan then asked that the playing of the video resume.

He asked that it be paused and told Exeter, “you didn’t oppose”.

“I am suggesting to you that the complaint that no ‘you did not oppose’ was a response to the count.”

He asked Exeter if he had heard the words, ‘You did not oppose” and Exeter said yes.

“But opposing what?” Exeter said, adding that he had heard it once, and not twice, as Astaphan asked.

Astaphan then asked that the video be played again and suggested to Exeter that Gaymes was responding to Eustace.

But Exeter told the court that the first thing was that the voice in the video was not Gaymes’ but Gideon Nash.

Exeter said he knows Nash’s voice, adding that Nash is his neighbour in Layou.

Astaphan then inquired about who Nash was and his legal team told him he was a witness for the government in the case.

Astaphan suggested to him that Nash was responding specifically to Eustace’s complaint that Gaymes had counted ballots that he had previously rejected.

“Is Mr. Nash in a position to ask that? Was he the retuning officer?” Exeter asked.

At this point, Senior Counsel Douglas Mendes, the lead counsel for the government, said,

“Tony, are you being cross examined?”

Mendes was responding to the fact that Exeter, as a witness, was asking question of Astaphan, who was conducting the cross examination, rather than answering the lawyer’s question.

“No,” Astaphan said, resulting in laughter in the courtroom.

Astaphan told Exeter that Nash was attending the count on behalf of Sir Louis.

Exeter said he did not know if that was the case, adding that he had seen Nash there but did not know in what capacity he was there.

Astaphan again made the suggestion that Nash was responding to Eustace, saying that she did not oppose the count of the votes that were in fact counted in polling station CLF.

“First it was Mr. Gaymes, now it’s Mr. Nash,” Exeter said, and told the court that he disagrees with Astaphan’s suggestion.

He told the court he cannot read Nash’s mind and had no idea what Nash was referring to.

“There was a lot of cross talk in the room. I don’t know what he (Nash) was talking to.”

During cross examination by Mendes, Exeter told the court that he had read the evidence of Gaymes in the case.

Exeter maintained his position that he did not know who Nash was representing.

Mendes said that Exeter was maintaining that position even though he and Eustace had said in their evidence that Gaymes was favouring Nash, who was representing Sir Louis.

Exeter said there was a lot of crosstalk in the room at the same time and that he does not know what Nash was talking about.

During his re-examination by counsel John, Exeter told the court that he did not recall hearing Nash make the alleged statement at the time that the video was being made.

John then told the court that Eustace had made the video and questions were asked regarding what she meant when she made the video.

John said he thinks it is fair that she should be able to clarify.

Mendes objected, saying that Eustace has been sitting in the courtroom the entire time and has seen the exchange.

“And we don’t know what use her evidence is going to be now,” the lawyer said.

But John responded, telling the court that Eustace was the first witness and was sitting in the court when Exeter testified and would have heard the testimony of every other witness.

For his part, Astaphan told the court that his objection is slightly different from Mendes’ and said the audio of the video is very clear and the evidence before the court is that there is only one ballot box with all the ballots missing the initials and official marks.

The judge, Justice Stanley John, however, allowed the petitioners to recall Eustace, to be re-examined by counsel John.

Eustace confirmed that her voice is on the video.
She said her recollection is that when she made the comment “it did not matter”, she was responding to Gaymes, when he said, “I did it for both.”

Mendes then asked Eustace if she heard someone say on the video you “You did not oppose”?

She said she recalled hearing someone saying, “I did it for both.

“That is how it sounded to me,” she said.

Mendes asked that the video be replayed and Eustace asked that she stop the technician when she hears the statement “I did it for both.”

The video was stopped at a point where Gaymes appears to be saying twice, “I did it for both”.

After saying it once, Eustace said, “Pardon me?” and Gaymes repeated the statement.

Eustace then told him, “Does that matter, it is the integrity of the process.”

Counsel John urged Mendes to have the video played again.

However, Mendes told the court that they would all listen the video in private and see what is being heard.

“It is one or the other, my Lord. If Miss Eustace is correct, that he said ‘I did it for both’, then I deeply apologise. Then, on the other hand, my lord, if what we are hearing is that ‘you did not oppose’, then we will make submission in due course.”

The judge asked Mendes if he does not need to hear the video again and Mendes said he does not think any purpose would be served by doing so.

“We are hearing different things, apparently. By the way, Mr. Exeter also heard something different,” Mendes said, referring to the question that Astaphan had put to the petitioners.

The trial continues on Monday at the NIS Conference Room in Kingstown, when then election chief, Sylvia Findlay-Scrubb, will be cross examined by Keith Scotland on behalf of Lauron Baptiste.

Baptiste is challenging the results in North Windward in the 2015 election.

Electoral officials say that the ULP won eight of the 15 parliamentary seats for a fourth consecutive term in office.