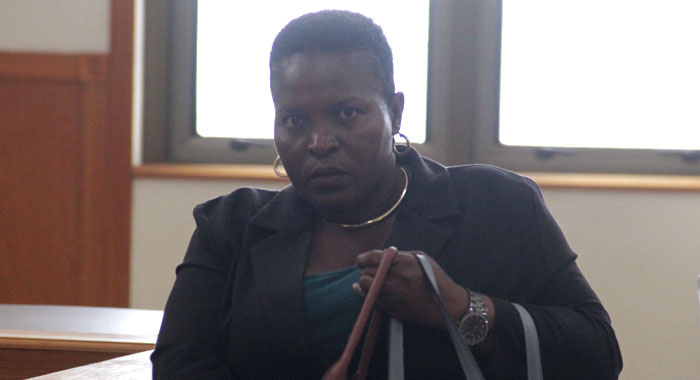 Two years after the 2015 election in Central Leeward, the presiding officer at a polling station in the district was told that the record of the vote she asaid she sealed in the ballot box on election night was missing.

Ashanti Caesar-Benjamin, of Keartons, Barrouallie, told the election petition trial on Tuesday that at the end of the preliminary count, she placed the two copies of the Form 16 in the requisite envelope and put the envelope in the ballot box.

Caesar-Benjamin said she had received training on how to conduct the poll and the instruction was that one copy of the form be sealed in the ballot box and she was to keep the other to give to the returning officer.

However, during cross examination by Queen’s Counsel Stanley “Stalky” John, lead lawyer for the petitioner, Benjamin “Ben” Exeter, Caesar-Benjamin said she took the relevant Form 14 oath, but placed both copies of the form in the ballot box.

In the oath, the presiding officer swears “that to the best of my knowledge and belief this register of voters kept for the said polling station under my direction has been so kept correctly and that the total number of votes recorded therein is [insert number] and that it contains a true and exact record of the votes given at the said polling station as the said votes were taken thereat; that I have faithfully performed all duties required of me by law”.

Caesar-Benjamin told the court she could not remember the importance of the oath.

John noted that Maia Eustace, a witness for the petitioner, said that the returning officer, Winston Gaymes, could not produce the respective form 16 statements for the ballot box, “CLI1”.

Eustace alleged that Gaymes “dismissively” stated that there was no Form 16 statement.

Eustace further said that her team objected to the count proceeding because there was no return on which to base the final count, but the objection was denied.

Caesar-Benjamin, however, maintained to the court that she had both of the Form 16 in the ballot box.

She said that after putting them in the box, she used the prescribed plastic ties to seal the box.

She said there was another tie and after the presiding officer, the poll clerk, and the agents for the political parties signed it, she placed the seal on the tie that was already attached to where it was supposed to be.

“At that end, I called the election clerk to let him know that I am finished and he can come with the [police] officer to pick up the box.”

Caesar-Benjamin said that Clive Robinson — the previous returning officer in Central Leeward — and the police officer came to pick the ballot box.

She said she could recall that the next time she heard about the Form 16 was in 2017 when she received a call from the Supervisor of Elections, Sylvia Findlay-Scrubb in relation to the form 16.

Caesar-Benjamin said she explained to Findlay-Scrubb that she had put the Form 16s into the ballot box.

Asked how Robinson had gotten the results of the poll, Caesar-Benjamin said she gave it to the phone when she called him to collect the ballot box.

Caesar-Benjamin told the court she could not recall the time she called Robinson but it was before midnight.

She said she could not give a rough estimation of what time she finished the counting.

Caesar-Benjamin also said she could not give a time when she completed the counting of the ballots.

In his cross examination of Caesar-Benjamin, Senior Counsel Anthony Astaphan, another lawyer for the government, asked the witness who had won in that polling station, and she said Exeter.

She further said that during the counting, the agents for the political parties were present.

Exeter, the main opposition New Democratic Party’s candidate for Central Leeward in the 2015 poll has brought the petition challenging the announced victory of Sir Louis Straker of the ruling Unity Labour Party administration.

The NDP’s Lauron “Sharer” Baptiste is also challenging the election of Montgomery Daniel of the NDP in North Windward.

The ULP was declared winner of the poll by an 8-7 majority.

11 replies on “PETITIONS TRIAL: Votes record missing after being sealed in ballot box”