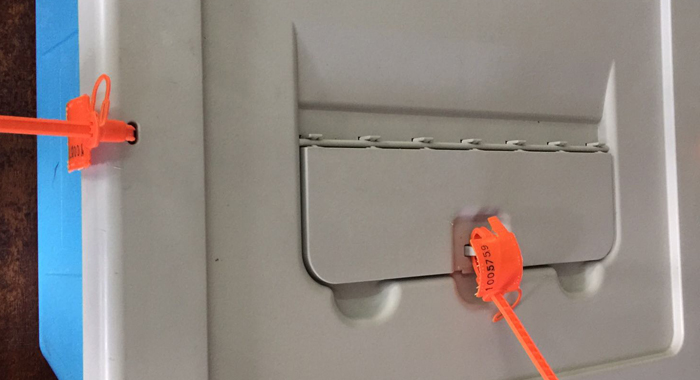 A ballot box used in the 2015 general election.

Former Supervisor of Elections Sylvia Findlay-Scrubb says she cannot say if she received any statement of the polls in the North Windward election in 2015.

The law requires that one copy be sealed in the ballot box after the preliminary count and the presiding officer retains the other.

At the final count, the returning officer unseals the Form 16, and signs to any amendments, before resealing the document in the ballot box.

The returning officer should retain the second copy of the Form 16.

However, on Monday, as she was being cross-examined during the trial of the North Windward petition, Findlay-Scrubb said she could not say “off the top of my head” if she received any Form 16s at all from North Windward.
Findlay–Scrubb, who retired as elections chief last April, said she would only be able to verify that information if she goes into the ballot box.

The ballot boxes cannot be unsealed without a court order.

Findlay-Scrubb objected to an application by the petitioner in the Central Leeward case to open all the ballot boxes there.

Baptiste is alleging that there was no final count of the votes in North Windward. His case states further that there were at the polling station NWI, 39 more counterfoils than ballots.

Scotland asked Findlay-Scrubb if the Form 16 provides the Supervisor of Elections and the constituents who have a concern in the election with an account of how the results were arrived at.

She said the document is one of the things that does so.

The Trinidadian attorney said he went to school during the era of the Common Entrance exams, and he was expected to show the working before giving his answer, a reference to mathematics.

Findlay-Scrubb told the court that she has exhibited in her witness statement the final results of the poll in North Windward.

“But you have shown the court no working as to how that final result was arrived at via the form 16,” Scotland observed.

Findlay-Scrubb said the returning officer, as the person who conducted the election, would have seen the Form 16.

“Did you, of your own contactation, of your own observations, see the returning officer see the form 16?” Scotland said.

“I don’t need to,” Findlay-Scrubb responded.

“What do you mean you don’t need to? You can divinate?” he asked.

“The returning officer, sees the Form 16, does the final count, verifying the information that is on the Form 16,” the former election chief replied.

She said that apart from the Form 16s, there is a report by the returning officer, Ville Davis, that is supposed to show “a working of the ballot count, etc. “that will support her findings in her witness statements.

Asked if she did not think that, in light of the pleadings in the matter, it would be helpful to provide that document to the court, Findlay-Scrubb said:

“I would say it would have been helpful if the document were here.”

Asked if she received any amendments to the statement of poll signed by Davis, Findlay Scrubb said:

“I cannot say that unless the ballot is box is opened.”

Meanwhile, on Tuesday, Ashanti Caesar-Benjamin who was the presiding officer at a polling station in Central Leeward, said she sealed both copies of her Form 16 in the ballot box on the night of the Dec. 9, 2015 election.

She said Findlay-Scrubb told her two years later that both copies of the document were not found at the final count the following day.

The NDP says its agents argued that the final count should not have taken place in the absence of the document, but the returning officer, Winston Gaymes, ignored their objection.