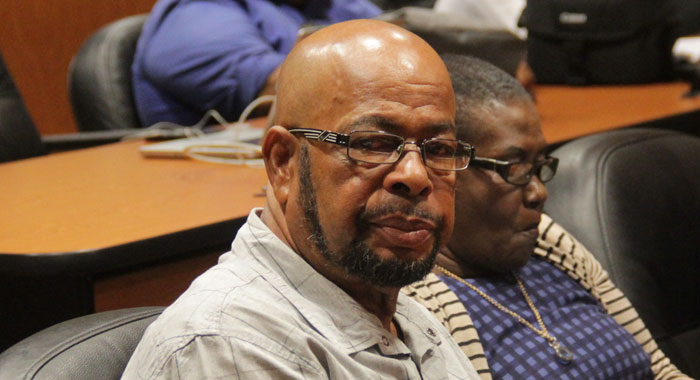 North Windward returning officer, Ville Davis, told the court that he lost the Form 16 from that constituency in the December 2015 election. (iWN photo)

The returning officer for North Windward inserted two pastors into his witness statement just before he was cross examined in the petition trial on Tuesday but said they are not willing to testify in the proceedings.

The returning officer, Ville Davis, had initially said that the pastors, Kendal Osment and Grady King, were unwilling to testify because of their religious affiliation.

He, however, later said he was not sure if the men’s status as men of the cloth was the reason for their refusal to give evidence, although they were electoral workers in the Dec. 9, 2015 poll.

Cheryl Sutherland, a resident of Sandy Bay, whom election officials randomly asked to witness the alleged final count on Dec. 10, 2015, says that there was no individual counting of ballots or counterfoils during the exercise.

Davis denied the allegation when he was cross examined by Keith Scotland, lead counsel for the petitioner, New Democratic Party candidate Lauron “Sharer” Baptiste on Tuesday.

Before the cross examination began, lead lawyer for the government in the case, Senior Counsel Douglas Mendes asked Davis if he wanted to make any amendments to his witness statement.

In the statement, Davis had originally said that on the night of Dec. 9, 2015, he put all the ballot boxes in the cell at the Sandy Bay Police Station and locked the cell with a key, which he kept with him overnight.

He, however, told the court that he wanted to amend that statement to say, “Grady King’s boxes from polling A-D were also in the cell with all the orange tags.”

In his original statement, Davis said that when he opened the cell on Dec. 10, 2015, all the boxes were there and were in the same condition he had left them on the night before.

That is to say, they had the plastic ties and flap, he said.

Davis then swore that the amended statement was true and correct.

Scotland began his by noting to Davis that he had said, “I was very careful to ensure compliance with the rules.”

“But you weren’t careful with your witness statement. Were you?” Scotland said.

Scotland continued: “But now, you know, sir, that with the amendments to your witness statement, you are now introducing an entirely new person, Mr. Grady King, in the collection of the boxes on the night? Yes?”

Scotland said that Davis was then telling the court that he was not with King when King collected the boxes and, therefore, does not know what happened with the boxes while they were in King’s possession that night.

“I would not know,” Davis said.

Scotland asked Davis if at one point on Dec. 10, 2015 one of the ballot boxes could not be sealed because the place to put the seal was broken.

“It could be sealed but, at the same time, it could be removed easier than the other boxes,” Davis said.

Davis told the court that when King was using scissors to cut off the “straps”, the scissors given by the electoral officer broke.

He said that King went somewhere next door, maybe at the police station, and returned with a very large pair of scissors.

“And when he forced it through the strap, the latch broke,” Davis said.

He said that when they were securing the box, they placed the flap there and covered it with one of the rectangular plastic seals.

All those present wrote their names on the seal, Davis said.

The petitioner is claiming that no final count was conducted in North Windward and at one polling station there were 39 counterfoils more than ballots.

Davis said in his witness statement that part of the final count was to reconcile the number of ballots with the counterfoils.

He said he did not find any instance where the number of counterfoils exceeded the ballots.

Scotland asked him where is the record of that exercise that he purportedly did.

“There was no evidence of inaccurate count,” Davis said.

But Scotland repeated the question, asking Davis where is the document he used to do that exercise.

Davis responded: “I had made my notes and my notebook has disappeared”.

Scotland said that with that knowledge that only Davis can have in mind, why didn’t he say in his witness statement that he had made the notes in his notebook but cannot find it.

Davis said he was not asked about it at the time.

But Scotland pointed out to Davis that he is an experienced returning officer who knows the importance of his notebook, which is the official notebook provided to him to take notes.

Davis said that was the case.

He also confirmed that his notebook and one in which Osment made notes were all together.

“We lost the entire package,” he said.

He said he might have reported “orally” to the supervisor of elections that the notebook was lost.

“But that is my personal notes from which I drew information.”

“Your personal notes from which you drew official information?” Scotland said.

But lead counsel for the respondents, Douglas Mendes rose, telling the court that his client did not say “official” information.

“And therefore, when that note was lost, the parts thereof — I am only talking about the official part, not your phone numbers, why didn’t you say to the supervisor of elections, ‘There is this document in which I have official notes, it has been lost?’”

Davis repeated that he mentioned it to the elections chief orally.

Davis said that he saw in Sutherland’s statement that she said there was no actual final count.

Scotland pointed out that Davis had King with him at the purported final count.

“Did you ask him to come and assist you and say what happened on the day?”

“I asked him,” Davis responded.

He further told the court: “He and Mr. Ken Osment are both pastors.”

“So they are sworn to speak the truth,” Scotland said.

“Yes,” Davis responded. “But because of their religious affiliation, they decided not to come.”

Scotland asked Davis if when he chose King and Osment to be his agents if he knew they were pastors and Davis said yes.

“But they went and the acted in an official capacity on the 9th. Correct?” Scotland asked.

“They can do that. It is not unauthorised for them to do it.”

“And now, because you know there is an issue, your word against Cheryl Sutherland and they’re not coming?”

Mendes, however, rose and said no one would have known that there would have been an issue between Davis and Sutherland’s account until after the witness statements were filed, adding that they were all filed on the same day.

Scotland then asked Davis if he had asked them to come and he said, yes, but they did not say that they are not coming because of their religious affiliation.

Davis said he asked them to testify as soon as he got the notice of the petitions in December 2015.

Asked if King and Osment were pastors then, Davis said only King was.

Davis then said he was not sure if it was King and Osment’s religious affiliation why they were not coming to testify.

Scotland, who is from Trinidad, said:

“Is it that — we have a saying where I come from — they playing mas’, but they ‘fraid powder?”

He then asked Davis if he had shown King and Osment the petition when he asked them to testify and he said yes.

Davis said he does not know if “Chevy” Hoyte — who was also present at the purported final count — is a pastor.

One pastor, Sylvester King, a worker at the Electoral Office, testified on behalf of the government in the trial.

King’s evidence amounted to he repeatedly saying that he could not recall the timeline of how his officers received the results from Central Leeward, where a petition has also been lodged. The court will hand down its ruling in the petitions matter on March 21.