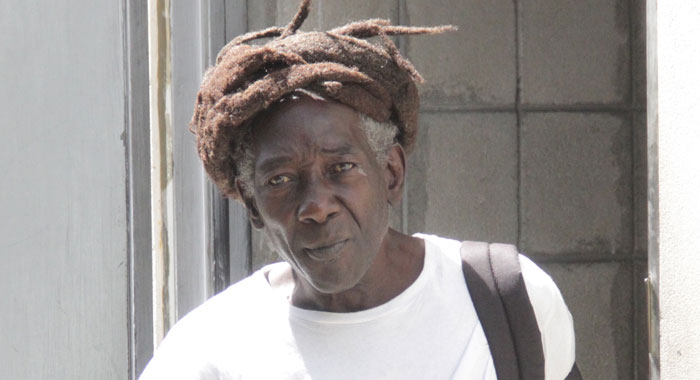 Andy Bennett was reprimanded and discharged for possession of 47 grammes of marijuana. (iWN photo)

A lawyer has suggested that the police engaged in racial profiling when they decided to search a Rastafarian man on whom they found 47 grammes of marijuana, US$5,620 and EC$2,200 in cash.

Grant Connell further accused Parliament of engaging in “hypocrisy” on the decriminalisation of marijuana.

He levelled the accusations at the Serious Offences Court, in Kingstown, on Tuesday, as he mitigated on behalf of his client, Andy “Blacka” Bennett, 62, of Chateaubelair.

Bennett pleaded guilty to a charge that on Feb 25, at Rose Place Kingstown, he had in his possession 47 grammes of marijuana with intent to supply.

Members of the Narcotic Unit, who were on mobile patrol, conducted a search on Bennett’s person after he was seen acting “suspicious” outside shop.

The dreadlocked man had a backpack on his back at the time.

In mitigation, Connell told the court that Bennett is a father of four, whose last previous conviction of that nature was “almost a generation ago”.

The lawyer told the court that because of Bennett’s appearance, he was walking in Kingstown and there is “reasonable suspicion”.

“Reasonable suspicion is that he is not Caucasian, toupee-wearing, briefcase-carrying and white. Simple. Because he looks how he looks, that’s why they stopped him. That’s sad. That means that we have to come off the plantation,” Connell said.

The money that Bennett had in his possession has been forwarded to the Financial Intelligence Unit, which, presumably will investigate whether it is the proceeds of crime.

Connell told the court he was between two minds to say that his client is a “traditional farmer” – an apparent reference to growing marijuana.

“If I say he is a traditional farmer now, the FIU justifies taking away his money. Why take away his money? Because a man of his nature, looking like that, is not capable of having US$5,620 and EC$2,200 on him,” the lawyer said.

Connell said that his client does not have a bank account and keeps all his money in cash.

He said Bennett has been in farming for the last 45 years, raising cattle and producing corn and vegetables.

He said his client was throwing himself before the court and begging for leniency.

“In the spirit and intent of Parliament, it said that a man of this nature should be not stopped with 46 grammes,” he said, in an apparent reference to further changes that Parliament might make to the nation’s marijuana laws.

“They tell you one thing misleading them and tick you off with the next hand,” Connell said of Parliament.

“…if I go on record now and say he is a traditional farmer, FIU look for the transcript and say, ‘Oh, you used to plant weed. So this is where you get all the money…’

“Somebody fooling somebody,” the lawyer said.

Senior Prosecutor Adolphus Delplesche suggested that for such a small quantity of marijuana, Bennett should be reprimanded and discharged.

And that was the sentence that Chief Magistrate Rechanne Browne handed down on the man.