Man stabs woman after she gets off van to avoid him 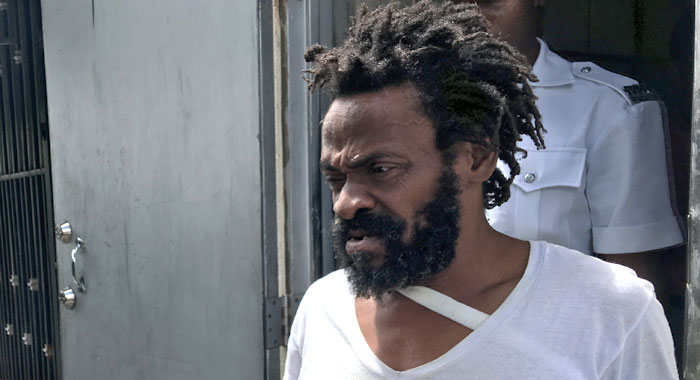 Wayne Marshall is escorted to prison after his sentencing on Monday. (iWN photo)

A 53-year-old Fountain man was, on Monday, jailed for three months for wounding a woman who had exited a minivan in an attempt to escape his unruly behaviour.

Chief Magistrate Rechanne Browne handed down the sentence on Wayne Marshall at the Serious Offences Court in Kingstown.

He had pleaded guilty to a charge that last Friday, March 1, at Arnos Vale, he unlawfully and maliciously wounded Hanifah Cupid, a 34-year-old vendor, of Belair.

The court heard that last Friday, about 7:45 p.m., Cupid boarded a minibus near Little Tokyo, Kingstown and sat in the backseat, next to the defendant.

As the minibus made its way out of Kingstown, Marshall, who appeared to be intoxicated, began using indecent language in the vehicle.

During the journey, he appeared to be unable to maintain his posture and as the vehicle moved, his weight would be thrown on to Cupid.

At one point, Marshall fell asleep in the vehicle.

Cupid asked Marshall to refrain from throwing his weight on her and he got annoyed and began cursing her.

As a result, Cupid asked the driver to stop at the bus stop near Massy Stores in Arnos Vale so she could disembark.

When she got off the minibus, the defendant disembarked also and continued cursing her.

Marshall went on to strike Cupid in the face.
She returned the blow and Marshall proceed to beat her up.

One of the blows caught her on the left shoulder, and Marshall then ran off in the direction of the nearby KFC restaurant.

Cupid then noticed that blood was coming from her shoulder.

The police were telephoned; they responded and took her to the hospital where she received stitches to a wound to the shoulder.

Marshall was later arrested and admitted to the offence.

In mitigation, he told the court that he was the first to exit the vehicle and that Cupid had struck him first.

Cupid, for her part, told the court that her shoulder was still swollen as a result of the injury and that she was only able to raise her hands because of the medication she was taking.

She said that when she was stabbed, she did not feel it and only realised she was injured when someone told her that her shoulder was bleeding.

In sentencing Marshall, the chief magistrate said that the nature of the offence was quite serious.

She noted that Cupid was injured and had to seek medical attention.

Browne said that an aggravating factor in the case was that Cupid had tried to escape Marshall’s “uncomfortable, rude and unwarranted physical contact, only to be chased and injured”.

She said that the defendant had previous convictions of a serious nature and has shown no remorse for his actions.

The chief magistrate said that while Marshall had pleaded guilty, a custodial sentence was most appropriate in the circumstances.