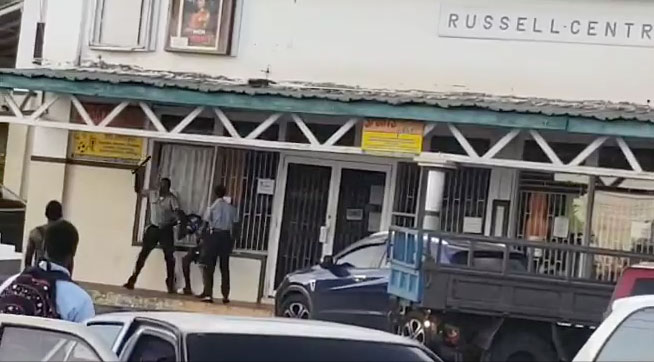 A scene from the video in which the youth is repeatedly struck in the head by a police officer.

The youngster seen in a video being repeatedly struck in the head with a truncheon by a police officer has been charged with assaulting the police officer and resisting his arrest.

Kishal Joseph, of Layou, was brought to the Serious Offences Court in Kingstown on Friday, where the two charges were read to him.

He was charged that on Feb. 27,at Kingstown, he assaulted Sheldon Searles, of Belair, causing actual bodily harm.

Joseph was further charged that on the same date and place, he resisted the arrest of Sheldon Searles, PC429, he being a police officer acting in the due execution of his duty.

She ordered the man to reappear at the Kingstown Magistrate’s Court on May 22, for the next hearing in the matter.

The Royal St. Vincent and the Grenadines Police Force said, Wednesday night, that it has launched an investigation after a video appeared on social media showing a police officer repeatedly beating a member of the public in his head with a truncheon.

Several parts of the video have since emerged and in one clip, the police officer and the man are seen holding each other by the collar.

iWitness News does not know what is the case or nature of the incident, but citizens have expressed outrage and have overwhelmingly described the response of the police officer as excessive.