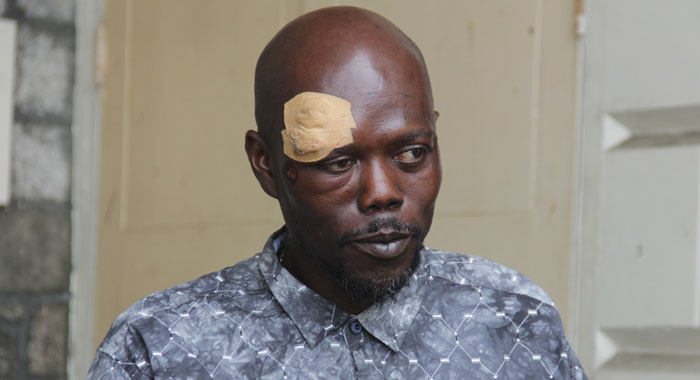 Jaston Burke after being fined on Monday for causing the death of his girlfriend by dangerous driving. (iWN photo)

An unlicensed driver who was at the wheel when his car crashed, resulting in the death of his girlfriend and mother of his three children, has been ordered to pay EC$4,000 in one year or go to prison for one year.

Justice Brian Cottle handed down the sentence on Jaston Burke at the High Court in Kingstown on Tuesday.

The judge also barred the man from holding a driver’s permit for three years.

In mitigation, Burke, told the court that he was sorry about the accident that caused the death of Keisha Yearwood, 36, of Chester Cottage.

“We have been together for 17 years and we have three children,” Burke told the court.

He said he was grateful to the deceased woman’s family for the support they have given him “because I am a good father to my kids them”.

He asked the court to have mercy on him “in the name of the Queen”.

“I’d like to say I am sorry for the accident. She has left me with three children I have to take care of,” Burke said, adding that the children are at Community College and secondary and primary school.

Burke also called Yearwood’s sister, Roxanne Haywood, to testify on his behalf at the sentencing hearing.

Haywood told the court that Burke was a good father to his children and was a provider for them.

She said that were Burke to be imprisoned, the children would become her responsibility and she would not be able to provide for them.

Burke pleaded guilty on Feb. 28, 2019 to a charge that on May 27, 2013 at Colonairie, he caused the death of Keisha Yearwood by dangerous driving.

He had also been charged with motor manslaughter, but the Crown withdrew that charge after Burke pleaded guilty to the dangerous driving charge.

The facts are that on May 26, 2013, sometime after 11 p.m., Burke, Yearwood and two other persons left Park Hill for Byera in a car owned and driven by Burke.

As the vehicle was travelling along the area popularly known as the Colonarie Long Stretch, Burke moved to the right lane and accelerated and overtook another vehicle that was travelling in front of him.

As he did so, his car began to swerve from side to side and he lost control of the vehicle, which ultimately went over a nearby embankment.

Yearwood died on the spot. An autopsy concluded that she died of cervical spine fracture.

The other occupants suffered relatively minor injuries and were treated in hospital.

After the accident, Burke left the scene and walked to the Colonarie Police Station, located nearby.

He told police that a car in which he was travelling had overturned and his girlfriend appeared to be dead.

The police went to the scene and observed Yearwood’s lifeless body cramped up in the front passenger seat of the car.

They questioned Burke as to who was driving the vehicle and he said:

“Officer, me gi’ mi friend the car to drive and after e car run over the bank he run. Aryo catch um. He kill my girlfriend.”

Burke was later arrested but refused to give a statement to the police.

A police motor inspector and examiner found that all four tyres on the car to be smooth.

He was later indicted on the charges.

In handing down his sentence, the judge said that the case was a tragic one.

He noted that the classical aims of criminal sentencing are retribution, deterrence, prevention, and rehabilitation.

Justice Cottle noted that other courts have imposed custodial sentences for causing death by dangerous driving.

The judge examined some of the cases in St. Lucia and noticed that while the statute speaks of a mandatory minimum, the case law shows that they consider that minimum not to be mandatory but indicative.

He said that when he looked at several of the regional authorities, in most cases, for the offence of causing death by dangerous driving, upon a guilty plea, no period of incarceration was recorded.

Sentences have ranged from a 12-month suspended prison term to fines of up to an EC$10,000 fine and barring the convicted persons from holding a driver’s permit for various periods of time, with compensation offered in some instances.

Justice Cottle noted that Burke had no previous convictions, had pleaded guilty and had expressed remorse.

“Indeed, on the night of the accident, he was heard to be saying he wished it was he who had died rather than his common law wife.”

The judge noted that the children have lost their mother.

The judge said that in the circumstances of the case he would not impose a custodial sentence.

He also made no order for compensation, noting that Burke has continued to support his children.

After the sentence was handed down, Burke exited the court where he interacted with his daughter, Haywood, and another relative.