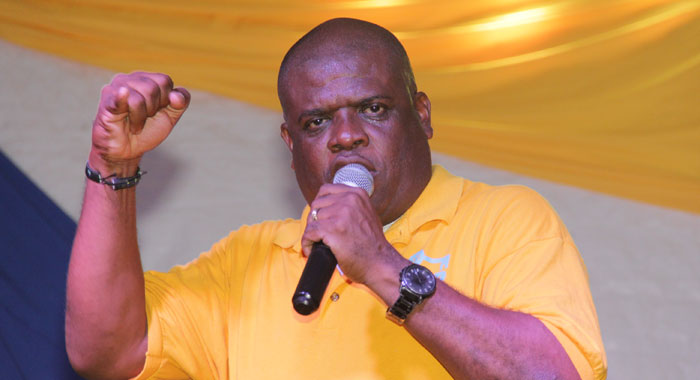 Opposition spokesperson on agriculture, Roland “Patel” Matthews is encouraging Vincentian farmers to reject the US$50 that an investor is offering for a pound of medical cannabis.

He made the point at a rally of his New Democratic Party in Georgetown on Saturday, where he said there was a need to grow the Vincentian economy.

“…we need to grow agriculture, my friends, we need to expand tourism and we need to mek sure that our ganja farmers get the best deal possible,” said Matthews, who is also Member of Parliament for North Leeward, where much of the nation’s marijuana is grown.

“Because there are some people going around trying to fool off the ganja men and tell them they going to give them US$50 a pound. I tell them no because right now, in North Leeward, women going bush go clean weed for the same $50 a day. We nah wah that.”

Matthews said that Vincentian farmers are bosses when it comes to marijuana cultivation.

“And North Leeward and North Windward, we have it locked. So, don’t come to me and promise our ganja man a little bit ah something. We want the whole hog.

“We wah the whole hog because we know in St. Vincent ganja runs things in the eastern Caribbean and we want to make sure our brothers and sisters out there who are involved … our ganja farmers they make something. But not the way they’re doing it.”

Matthews, a former teacher, spoke about his own experience with marijuana cultivation.

“I told them when it comes to ganja production and involvement, Patel Matthews, me nah no jus’ come anuh. Me nah jus’ come yuh know. As a matter of fact, when I started to teach in 1984, before I started, I was called from Twallo Mountain in a place called Takou to come to Petit Bordel Secondary School. You know what I was doing in Twallo? Me ha’ me own little ganja cultivation, yuh know.”

Matthew said that when he went to university, he envisaged that the day would come when ganja would be a big thing in the Caribbean and the world.

“I did a study at university, it was entitled ‘The Socio-economic implication of marijuana cultivation on the village of Petit Bordel.’ I know what I was talking about because I know where I was going.”

He noted that Minister of Agriculture, Saboto Caesar, said in parliament last week that in some parts of the country person where they were referring to him as the “ganja minister.

“I said, don’t worry, just now, it will be me. It go be me just now. Alyo laughing? The next ganja minister, the only ganja minister who understands what it requires, who making sure that our traditional ganja farmers get their due, I understand,” Matthews said.

“My brothers and sisters, Rasta farmers out there, ganja farmers, the New Democratic Party is the only party that understands your plight and we are promising you a better deal. Nobody is coming to St. Vincent and rip us off. Not as long as Patel Matthews and the New Democratic Party is in the parliament. We are making sure that our farmers get the best return possible,” Matthews told the rally.

However, the Cannabis Revival Committee, which is headed by Junior “Spirit” Cottle, has urged farmers to accept no less than the EC$300 (US$112) that they have traditionally received for each pound of recreational marijuana, which remains illegal in SVG.