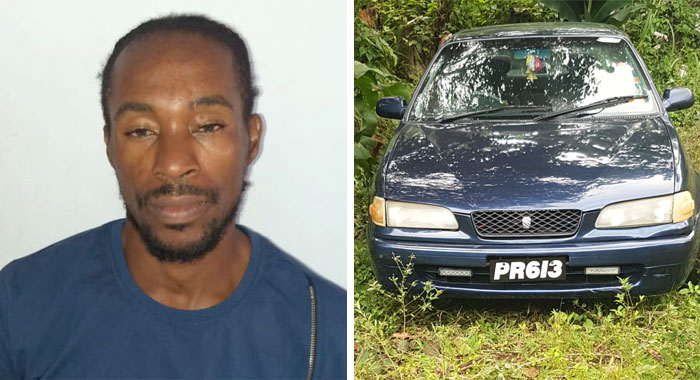 Roneil Bobb, right, and that car that he had when he stole 150 oranges from Grant Connell’s farm.

A Richland Park man who was caught red-handed stealing oranges from a farm in Congo Valley was fined for that crime and jailed for giving police a false name.

The man also had a car, PR613, which contained six empty sacks, parked on the farm.

Bobb told the court that he had rented the vehicle.

Connell summoned the police and they arrested Bobb, who offered the farmer EC$1,000 for the oranges to avoid a criminal charge, which the farmer refused.

Bobb appeared before magistrate Bertie Pompey at the Georgetown Magistrate’s court on Monday, where he pleaded guilty to a charge of failure to produce a buyer’s certificate for 150 oranges.

The charge falls under the Agricultural Produce and Livestock (Prevention of Theft) Act, commonly referred to as the praedial larceny law.

Asked what he had to say for himself, Bobb, who is also a farmer, told the court, “I have nothing to say.”

“You’re from Richland Park. What were you doing in Congo Valley?” the magistrate asked the defendant, who replied, “I was in the company of a guy who works up here.”

Pompey noted that Bobb has pleaded guilty at the first opportunity and it was his first conviction.

“This is an agricultural community and everybody depends on it for their livelihood. If you have to steal, it would dissuade other farmers,” he noted.

“Farmers don’t steal from other farmers. You have to pay $1,200,” the magistrate told the produce thief.

However, while he was able to avoid jail time for his crime against the farmer, he was not so lucky on the charge of giving police a false name.

When police asked Bobb what was his name, he told them he was Travis Davis.

They had allowed him station bail before realising that he had given them an incorrect name.

On March 15, the police rearrested Bobb and charged him with giving a false name to police.

Pompey sentenced him to one month in prison for the crime.

Addressing the court after the matter was disposed of, Connell said that he had gotten back the oranges.

“I don’t know why God placed this 2-legged rodent to destroy the farmer,” Connell said.

He further noted that when he met Bobb on the farm, the thief has a cutlass and had to be asked three times to put it down.

Connell said that if he had to ask Bobb a fourth time, the matter might have ended quite differently.

He told the court that other farmers had contacted him and said that the same car had raided their harms.