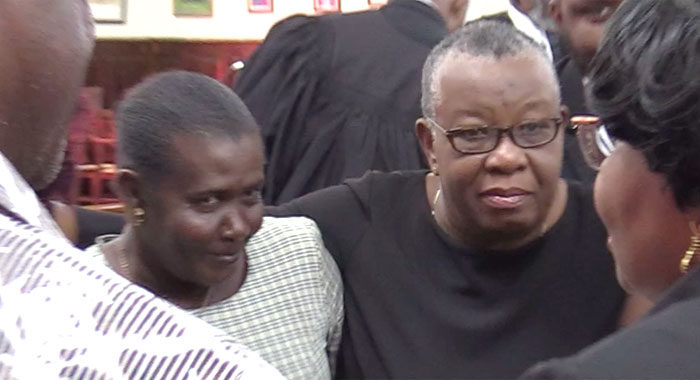 Presiding officer for NWI Veronica John, left, and former Supervisor of Election, Sylvia Findlay-Scrubb and other persons in a huddle inside the courtroom after the judgement on Thursday. (iWN Photo)

Sylvia Findlay-Scrubb who was supervisor of elections during the Dec. 9, 2015 elections, the result of which the court upheld on Thursday, had no comments for iWitness News after the ruling.

After the judgement at the High Court, Findlay-Scrubb spent some time in a circle with some women, including the new Supervisor of Elections Dora James and Rene Baptiste, a lawyer for the government in the case.

At one point, they seemed to be praying.

Asked if she had any comments on the ruling, Findlay-Scrubb who took up the election chief post in 2009, after retiring from the teaching service, said she had “absolutely none”.

Also in the group was Veronica John, who was the presiding officer at NWI a polling station in North Windward.

Asked if she had any comment, John, a respondent in the North Windward petition, told iWitness News, “I can’t remember. I can’t recall any comments today.”

“I can’t recall” was a popular response given by witnesses for the respondent during the hearing of oral evidence during the trial of the petitions.

John, during her testimony, admitted to refusing to take a voters ballot after claiming that she had seen a flash and heard a click.

The court ruled that there is no rule forbidding the taking of a photo in the polling station and ordered that the voter’s ballot be added to the tally.

John also admitted during the trial that as electors arrived to vote, she told some of them “show me your voting finger”, words of a popular campaign song for the ruling Unity Labour Party (ULP) ahead of the 2015 polls.

The NDP’s Benjamin “Ben” Exeter had also challenged the victory of the ULP’s Sir Louis Straker in Central Leeward.