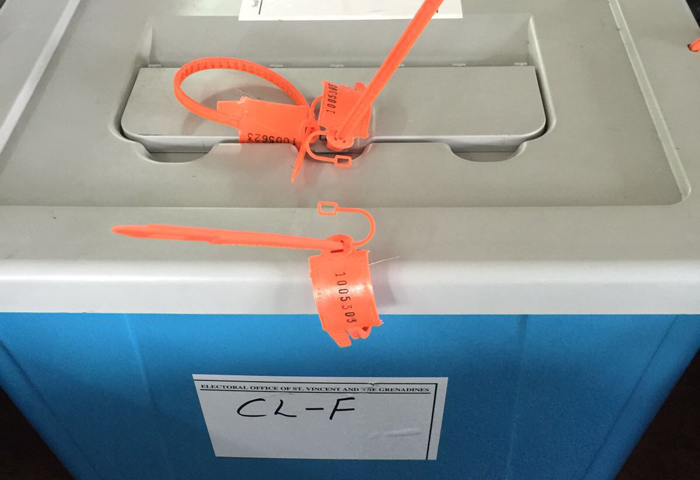 The court has remained silent on the legality of the plastic ballot boxes without locks and keys, as the law dictates, which were used in the December 2015 general elections.

Acting High Court judge, Stanley John, who was contracted to preside over the trial, had said during the proceedings that one of the central issues in determining the outcome of the petition is the question of whether the ballot boxes used in the election were in accordance with rules and whether they breached any of the rules.

In his March 21 ruling, Justice John said that the complaint about the ballot boxes came too late.

His ruling was, however, silent on whether the boxes were in keeping with the law.

The complaints about the ballot boxes formed part of the two petitions that the main opposition New Democratic Party (NDP) filed, challenging the results of the Dec. 9, 2015 general elections.

The court dismissed those petitions on March 21, after a full trial, and declared that the seats — Central Leeward and North Windward — were duly won by the ruling Unity Labour Party (ULP).

In the petitions, the NDP complained that the plastic ballot boxes were not in keeping with the law.

Sylvia Findlay-Scrubb, who was elections chief at the time of the vote, testified that the law anticipated that the wooden ballot boxes, which could be secured with a lock and a key, would be used.

Benjamin “Ben” Exeter, who was the NDP’s candidate in Central Leeward, filed a petition challenging the announced victory of Sir Louis Straker of the ULP.

Lauron “Sharer” Baptiste of the NDP also challenged the victory of Montgomery Daniel of the ULP in North Windward and the court upheld the election of both ULP candidates.

In the Central Leeward petition, Exeter, along with Maia Eustace, a lawyer who was a roving agent for him on polling day, Dec. 9, 2015, complained about the ballot boxes.

In his witness statement, Exeter said that before the final count, on Dec. 10, 2015,

He said that he and his agents showed this to the presiding officer, Winston Gaymes.

“The box could have been opened without breaking the white seal,” Exeter said in his witness statement, adding that he noticed that the white seal was not made of paper “but what appeared to be an adhesive plastic composite material” that Gaymes easily peeled off from the plastic ballot boxes.

“I saw him do this several times. Consequently, I used my smart phone to take photographs of these inadequately sealed boxes,” he said, adding that copies of the photographs were affixed to the witness statement.

Exeter said that he formed the view that the boxes were not properly sealed at all, “because each had four orange plastic straps to close it on the four sides of the box and one on the flap which opens to gain access to the contents of the box.

“These orange straps could have been easily removed and replaced.”

Under cross-examination by Senior Counsel Douglas Mendes, the main lawyer for the government in that case, Exeter said that the ballot boxes were not tamper-proof.

He, however, accepted that he did not put any evidence before the Court that the ballot boxes were in fact tampered with.

In her witness statement, Eustace said that on five of the 15 ballot boxes, what appeared to be the seal of the respective presiding officers was placed inappropriately.

In two of those boxes, the purported seals were used as labels in that they were simply applied to the cover of the ballot box without touching the flap, covering the slot through which ballots are to be deposited.

In the third instance the purported seal was placed on the hinge of the centre flap rather than the lip, thereby presenting no barrier to access.

In a fourth instance, the purported seal was mangled into a wad around a plastic zip tie.

Eustace further said in her witness statement said that during the final count, when Gaymes, “having recounted the ballots in a ballot box, placed a purported seal on the said ballot box, he would first remove the paper seal ostensibly placed there by the presiding officer at the conclusion of the preliminary count”.

She said that she observed that every time Gaymes “removed the presiding officer’s purported seal, it left absolutely no adhesive or paper residue; it never once tore. It could be reapplied.”

Eustace further said she observed and, therefore, concluded, that “the purported seals were tear-resistant, unbreakable, and therefore were not seals at all because they could not evidence a violation of the security of the ballot.

“In the circumstances, I realised that none of the 15 ballot boxes was sealed according to law.”

Cheryl Sutherland, a teacher and resident of Sandy Bay, who was co-opted to witness the “final count” after none of the candidates or their agents turned up, also testified about the physical appearance of the ballot boxes and the placement of their labels.

In her witness statement, the former elections chief said that the ballot boxes provided for Central Leeward were identical to those used in the other constituencies, about which no complaint has been made.

Findlay further noted that these were the same ballot boxes used in the referendum of 2009 and the general election in December 2010 and there were no complaints then about the boxes.

However, in her report on the 2010 election, Findlay spoke about the plastic ballot boxes not having locks and keys.

In her report on the Dec. 13, 2010 election, Findlay-Scrubb said that, at a meeting to review the election, returning officers who served in the 2010 polls recommended that a number of areas be “considered for future elections”.

Among these was a “review of the Representation of the People Act 1982” regarding a number of areas, including “the plastic boxes that do not require a key, and the seals used on these boxes, including the colours to be used at each stage of the process”.

Findlay said during the petitions trial that the boxes were ordered before she became elections chief in January 2009.

In her witness statement, Findlay-Scrubb said that the plastic boxes “are locked by the insertion of plastic cable ties through a hole on each of the four sides of the box which matches with a hole on the cover, and then pulling the ties tight until it grips the cover and the side of the box together and locks them in place. The cover has a flap in the middle which covers the slot through which the ballots are inserted. This flap is also locked in place in a similar manner to the sides of the box. In all, five cable ties are used, save for when access to the slot is required to receive the ballots, in which case four are used.”

She further said all political parties had a chance to examine the boxes before the decision was made in 2009 to switch to the current ones.

“When I took up the position of supervisor, a sample of the plastic box was in the office already. I invited representatives of the NDP and the ULP to view the sample box. Representatives of both parties attended and they were treated to a demonstration as to how the boxes would be secured. Both sides expressed satisfaction with the boxes. Mr. [Arnhim] Eustace attended on behalf of the NDP and Mr. Francis and Mr. [Edwin] Snagg attended on behalf of the ULP.”

During cross examination by Queen’s Counsel Stanley John, Exeter’s chief lawyer, Findlay-Scrubb said that when the House of Assembly Rules spoke to “sealing” and locking the ballot box it was a reference to the wooden boxes and it was not possible to seal the plastic boxes in a similar manner.

She further answered that the plastic ties were introduced to replace the key used in the wooden boxes. She accepted that there exists no provision in the rules for stickers and plastic ties but she said, as Supervisor of Elections, she had to make a decision how to secure the plastic boxes.

Under cross-examination by Keith Scotland, Baptiste’s lead counsel, Findlay-Scrubb admitted that the lids of the plastic ballot boxes were detachable.

She further admitted that the boxes were secured with ties which could be removed by cutting with a scissors and replaced with one of a similar colour. She further said that in her report on the elections she said that she did not receive any reports about the ballot boxes.

In their written submission, counsel John and Scotland invited the Court to find that the ballot boxes seen at the final count were not sealed in accordance with the rules and that neither of the presiding officers transmitted envelopes with keys for the ballot boxes.

However, Senior Counsel Anthony Astaphan, a lawyer for the respondents, reminded the court that the plastic ballot boxes secured with zip ties were used in the 2009 national referendum and the 2010 general elections.

Astaphan further said that Findlay-Scrubb took the extraordinary step before their use in 2015 for the boxes to be inspected by the leaders of the political parties.

“The court accepts her evidence and therefore thinks that it is too late in the day to complain about the use of plastic boxes and the manner in which they were secured. As I understand the concern of the Petitioner Benjamin Exeter, the boxes were not tamper-proof and thereby susceptible to undetected intrusion. That is not evidence that any of the boxes were tampered with.”

The judge further found that there is no evidence before the court that anyone peeled off the plastic seals or cut the plastic ties.

He said an election court cannot speculate on matters that could have happened.