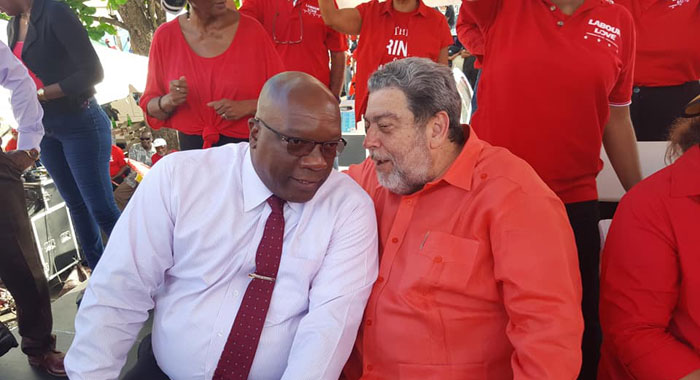 Prime Minsiter of St. Kitts and Nevis, Timothy Harris, left, and Prime Minister of St. Vincent and the Grenadines, Ralph Gonsalves, speaking on the platform at the ULP rally in Kingstown last Thursday. (Photo: Lance Neverson/Facebook)

Prime Minister of St. Kitts and Nevis, Timothy Harris has explained his presence on stage at the Unity Labour Party’s (ULP) rally last Thursday in Kingstown to celebrate 18 years in office.

Harris’ explanation came amidst allegations that he was ungrateful for the support the opposition New Democratic Party (NDP) in St. Vincent and the Grenadines showed him and his Team Unity coalition in 2014 amidst their failure to have a motion of no confidence in the then Denzil Douglas government debated in Basseterre.

In 2014, then leader of the opposition in Kingstown, Arnhim Eustace, hosted Harris and other members of his team, and called our his supporters to protest in Buccament, where CARICOM leaders were meeting.

Harris’ Team Unity went on to win the general elections in Basseterre in 2015, and he invited Eustace to attend his inauguration as a special guest.

In an interview with Jerry S. George last Saturday, Harris said that he was in SVG for a meeting of the Regional Security System and went to the rally at Heritage Square “simply because I needed to have an audience” with the prime minister Ralph Gonsalves, who is also political leader of the ULP.

“The prime minister, at the moment in time, I was advised, was at a particular location,” Harris said.

“I went there and basically had that conversation with him and then exited since I was not, basically, part of the process that was taking place.”

Harris said that it was not the first time that he had gone to a political rally to speak with another CARICOM prime minster.

He said he was in Grenada during the last election and mounted the platform “said my hello and greetings to a colleague, Prime Minister Keith Mitchell, and then exited the stage, just as I did because I was not there either to promote one side or to diminish the other.

“It so happens that they are my colleagues, I had needed to say words to them, I said those words and I moved.”

He said that also in Grenada, he visited the launch of the opposition party, “said my hellos to Nazim Burke because we know each other.

“We are humans, we relate, and then he had invited me to become involved, I said no, I am not here for that,” Harris said.

He said that there is an interest if one is involved in politics to see how things are done elsewhere.

“I looked at the launch in Grenada, learned one or two things that we would have done differently, looked at what Nazim was doing and so on and so on.

“So these were not, as it were, the nature of dramatic events, which one needs to keep in the spotlight. It is true that I have a special relationship with the leadership of the NDP and I do not think that my going on stage to have a word with the prime minister and exiting thereafter, not being part of the process, not speaking on the platform should in any way bring that particular relationship into one of revision.”

Harris said he would be surprised if the leadership of the NDP “would think that there would be a need for some reflection on that because something mischievous happened, as it were, because two prime ministers had a brief moment of encounter at a political place. You can meet anywhere.”

Some supporters of the NDP took to social media and lambasted Harris, calling him ungrateful because of his presence on the platform at the ULP rally.

However, in his interview with George, Harris said that having had such an experience in SVG, he would think more carefully in the future about such an exposure.

“Every experience enriches one’s perspective and provides a guide for the future. What we have always [to do] is to consecrate the future, because the past is already gone and as we live, we learn and we make the necessary adjustment.”

He said that part of learning is to basically unlearn things.

“Some of the things that hitherto may have been appropriate may have changed. And so you unlearn them and part of moving forward is that these new experiences help to anchor you into a better policy frame. I would agree that, on reflection, it was not the most ideal situation. But you and I appreciate that even in your role, sometimes it is not at the most appropriate venue that you are able to do you work.”

Asked what could have been so urgent that he had to mount a political platform to talk to his colleague, Harris said:

“Because, it was nothing to hide. For one reason, it was not a shoo-in private meeting. The fact that it was held in the sunshine of public scrutiny tells you it was nothing of which I was ashamed or felt a need that we had to hide because I was dealing with stealth. No, I needed to have a conversation with him and I am not at liberty and it wouldn’t be appropriate or professional or in accordance that I disclose.”

He said that one would have to accept on merit that the prime minister needed to have a word and, at the moment, that was the best time he could have a conversation with his prime ministerial colleague ahead of a meeting that was taking place only hours thereafter.

Harris said that because of Gonsalves’ own engagement at the political rally, he would not have been able to provide the time for the meeting.

He said that chairman offered him the opportunity to speak at the rally.

“And I did say to the chairman that I was not going to speak. The prime minister, to his credit, also explained to him, that I was not there to be part, as it were, of that political event, in the sense to endorse or come to make a statement. I was there in the context of the regional security system. He understood that and they moved on to do what they had to do and I moved on to do what next I had on my agenda.”