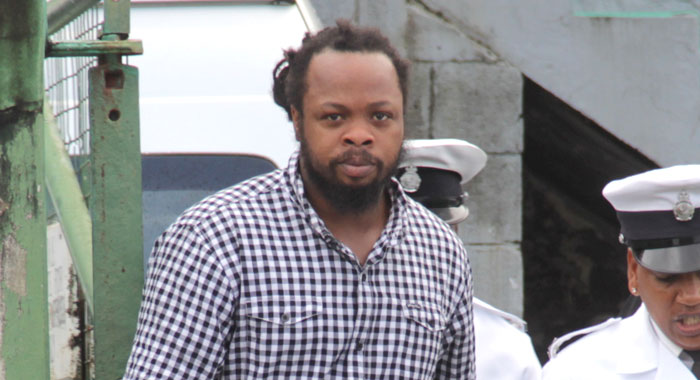 Jelanie John left a fellow inmate paralysed from the chest down after throwing him to the ground twice, using a wrestling move called a “spade””. (iWN photo)

A prisoner who, in January 2017, lifted up another inmate and slammed him to the ground twice, resulting in his paralysis from the chest down, was on Wednesday sentenced to eight years in jail.

However, with Jelanie John, 32, having already spent two years, one month and 14 days on remand, he would have to spend a further five years, 10 months and two weeks in jail.

“Mr. John, you were provoked but you must not do wrong to answer wrong,” Justice Brian Cottle said after handing down the sentence at the High Court in Kingstown.

John was found guilty last week of a charge that on Jan. 26, 2017, at Kingstown, without lawful excuse, he caused grievous bodily harm to Damani Williams, then 32, of Campden Park, intending to cause such harm.

Both men were on remand at Her Majesty’s Prison in Kingstown, when the crime was committed.

The facts of the case are that both John and Williams along with about two dozen other men were housed in a large cell at the prison.

Williams, rather than taking an available alternate route on his return from showering, chose to pass in the area where a domino game was being played.

As Williams passed by, John got sprinkled with some water and he  drew this to Williams’ attention.

Williams did not apologise but rather, spoke threateningly to John.

Shortly after, Williams left his area and again passed through the domino game.

His foot came into contact with John, whose request for an apology from Williams was met with a barrage of expletive-laden, threatening language.

The prison officers spoke to both men, but Williams continued to misbehave.

Williams then turned to spread a blanket on the floor and John armed with a broomstick,  beat Williams until the stick broke.

John then rushed to Williams, picked him up and tossed him over his shoulder onto the concrete floor of the cell.

John told the court he had used a wrestling move he described as a “spade”.

He again repeated the “spade”, which he demonstrated to the jury during the trial.

The “spade” mimics the action of someone shovelling material and tossing it over the shoulder.

Williams landed on his head, resulting in damage to his cervical vertebrae and paralysis from the chest down.

In an electronic interview with police on the day of the incident, John said that Williams had threatened to kill him.

He said that the complainant also told him “he nah praise Jesus, is Satan he praising.

“But when he come down dem road dey, I could not ah hold it. I ain’t going tell yuh no lie. Me ain’t going behind nobody back. I end up and tek up a broomstick, go round to the bathroom, tek up a broom stick and come back.

“Well, he ain’t  dey standing up facing me. He back was turn facing me. Me tek up a broomstick and just start to offload some broomstick pon him. And he get some lash. After that, ah lift him up and drop him back two times. After that, he was unconscious.”

In mitigation, John, who was unrepresented, again presented to the court a diagram he had drawn of the layout of the cell, showing that Williams had an alternative route to and  from the bathroom.

John asked the court if someone can be arrested for issuing threats and the judge said that people can be charged, convicted and imprisoned for using threatening language, as this is a criminal offence.

John also asked the court if unwanted contact with another person’s body could be a crime.

The judge said it depends on the situation, adding that unwanted contact can amount to assault or battery.

John told the court that his “intention toward the incident was not in my jurisdiction but certain things do happen in a space like such”.

He said he was wondering if persons can be arrested for issuing threats and unwanted contact with another person’s body and if that is the case, Williams was the aggressor.

John, however, asked the court to have sympathy on him.

‘co-author of his own misfortune’

Justice Cottle noted that in St. Vincent and the Grenadines, the offence of grievous bodily harm with intent carries a maximum penalty of life in prison.

He said that in every criminal case, the court keeps in mind the aims of criminal sentencing, namely retribution, deterrence, prevention and rehabilitation.

The judge said the court must follow the direction of the Court of Appeal, adding that that a starting point of 10 years is appropriate in most cases, including the extant court.

The aggravating features of the case, Justice Cottle said, is that the prisoner inflicted grievous bodily harm on Williams by throwing him from over shoulder height twice in succession.

The judge said he is not persuaded that John displayed remorse for his action.

The incident occurred in a cell where both John and Williams were expected to be on good behaviour.

The judge said that the mitigating features are that Williams initiated the confrontation by deliberately coming into contact with the John, who was playing dominos.

Williams also persisted in the use of threatening language when the prison officers on duty asked him to desist, Justice Cottle said.

“That kind of conduct displayed in the confines of a crowded prison cell served to provoke [John]. And although provocation is no defence to this offence, I consider it to be relevant for the purposes of mitigation,” the judge said.

“In short, I view the complainant as the co-author of his own misfortune.”

The judge said that when he considered the aggravating and mitigating features, he is content to move downward from the notional sentence by three years.

The judge said that given his antecedent and age, he does not place him in the category of those who have no hope for rehabilitation.

The judge said that he considers John’s capacity to reoffend merits an upward movement of the notional sentence by one year.

Karim Nelson and Rose-Ann Richardson appeared for the Crown.

One reply on “Prisoner gets 8 years for crippling fellow inmate”