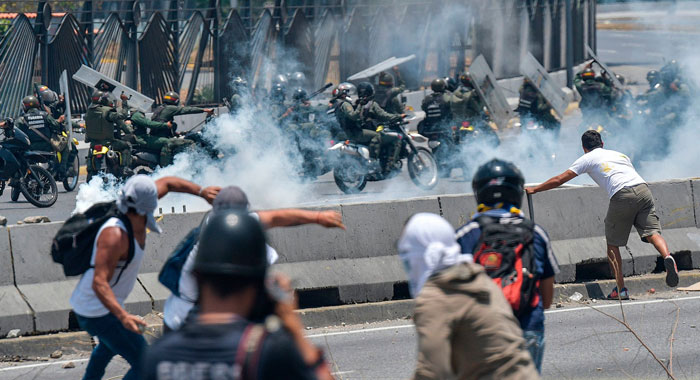 The Ralph Gonsalves government said on Thursday that it was  “monitoring closely the disturbing events unfolding” in Venezuela “and is very concerned about the increasingly volatile situation in the country.

“We condemn all forms of violence and urge all parties to desist from those acts which aim to destabilise the Venezuelan society,” the Ministry of Foreign Affairs said in a statement.

On Tuesday, Venezuela’s opposition leader, Juan Guaidó declared what he called the “final phase” of the operation to topple President Nicolas Maduro.

He posted a video of him with a number of men in uniform and said he had the support of “brave soldiers” in Caracas, the BBC report.
The BBC said that both pro- and anti-government supporters held demonstrations in Caracas on Wednesday in which 46 people were injured in clashes between opposition supporters and the security forces.

The statement said that St. Vincent and the Grenadines (SVG) “maintains its principled stance that dialogue based on mutual respect and adherence to international law is the only path to peace and progress in the Bolivarian Republic of Venezuela, however difficult that path may be.

“In this respect, we call on all parties to resort to constructive dialogue to resolve the crisis in the Bolivarian Republic of Venezuela.”

The statement said that SVG remains steadfast in its commitment to the Montevideo Mechanism, which was activated in Uruguay, with the intention of promoting dialogue among the political sectors in Venezuela.

The statement said that together with CARICOM, Mexico and Uruguay, SVG is “hopeful that this ‘mechanism of hope’ will be afforded the time and space to assist Venezuela in crafting a political solution by Venezuelans for Venezuelans, within the confines of the Constitution of the Bolivarian Republic of Venezuela.

“In this context, we encourage all States to work together in promoting and respecting Latin America and the Caribbean region as a Zone of Peace.”

The statement said that SVG “stands ready to assist constructively our beloved brothers and sisters in the Bolivarian Republic of Venezuela and reaffirm our unwavering commitment to uphold the fundamental principles of respect for sovereignty, the rule of law, non-intervention, non-interference, respect for human rights and democracy as enshrined in the United Nations Charter.

“Respect for these bedrock principles will ensure the continued viability of international law and create the “pathway to peace” in the Bolivarian Republic of Venezuela,” the statement said.