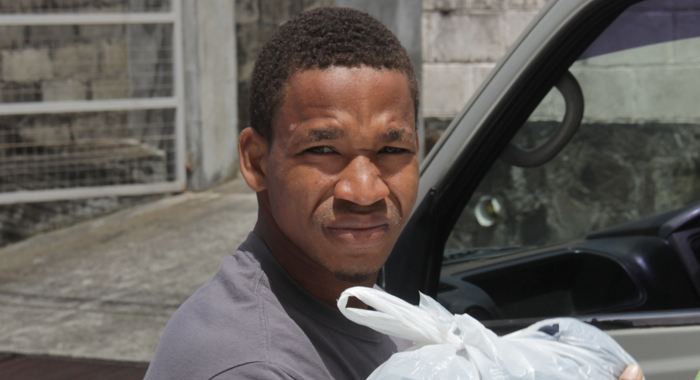 Jamal Carter on his way back to prison on Tuesday, two weeks after he was released after serving a sentence. (iWN photo)

A Paul’s Avenue man who stole items valued EC$63.25 from a hardware store in Kingstown last November was, on Tuesday, jailed for that crime, 14 days after he was released from prison.

Jahmol Carter, a 24-year-old labourer, pleaded guilty at the Kingstown Magistrate’s Court to a charge that on Nov. 16, 2018 at Kingstown, he stole one Brenton padlock, value EC$13.45, one pair of pliers, value EC$39.80 and two pounds of nails, value EC$10, total value EC$63.25, the property of Gibson Building Supplies.

As soon as he pleaded guilty, Carter told the court that he had served an unrelated prison soon after committing the offence and was asking for a chance to pay a fine.

The facts are that about 3:10 p.m. on Nov. 16, 2018, Lenny Daize, the manager of the store, was in his office looking out into the customer area when he saw the security guard, Jenny Pierre, running behind Carter.

Carter ran out of the store.

As a result, Daize checked his security system and saw that the defendant had taken up items from the hardware and had placed them in his bag and in the waist of his pants.

He left the store without paying for the items listed.

The matter was reported to the police and went to the attention of PC 993 Samuel.

On June 3, 2019, the investigator met Carter at the police station in Kingstown and recognised his face from the video footage.

The police officer cautioned and interviewed Carter, who gave a statement admitting to the offence.

Carter told the court that he was in need of deodorant and toothpaste and he stole the hardware items to sell them and to buy the toiletries from the proceeds.

The man said that since being released from prison he got a job and decided to change his life.

“When did you change your life? Tell me. What year?” Senior Magistrate Rickie Burnett asked Carter.

The man said that while in jail he decided to do better.

The magistrate noted that all of Carter’s convictions are for theft and burglary, the most recent being in 201 7.

“I am not going to charge you any fine,” Burnett said.

Carter pointed out that he was released from prison on May 21 and Burnett told him that was because he was not changing.

“If you want to keep out of prison, don’t break the law,” the magistrate said.

“This was a last year matter,” Carter pointed out.

The magistrate said that while that is the case, Carter is always in prison.

“Yeah, but ah does try me best,” the defendant said.
The magistrate told him he was not trying hard enough.

“If you don’t commit crime, you would not be in prison,” Burnett said.

The magistrate said he did not want to embarrass Carter by telling him that his record started in 2009 “as a little boy”.

Carter said he was on the street at the time, adding that his father killed his mother when he was a child.

He said he dropped out of school when he was in form 4 and now lives in Paul’s Avenue with a friend.

Burnett said he does not understand why shoplifters always ask to be allowed to pay a fine when they were unwilling to pay for the items initially.

Carter said he did not have the money at the time and the magistrate said that is why he has to be punished.

“Because your intentions were dishonest from day one.”

The prosecutor, Police Constable Corlene Samuel, told the court that every time Carter is brought up on a charge he says he will never be seen before the court again.

“He was given chances; he was bonded; he does not change,” the prosecutor said.

“Jamal, I cyah help you this morning. Your record is terrible so you have to do six months for this one,” Burnett said in handing down the prison sentence.