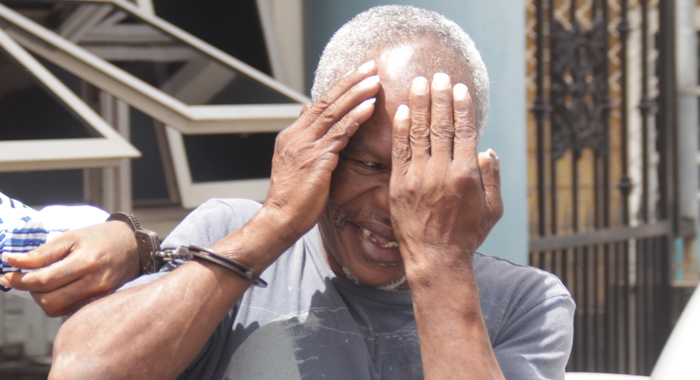 Bertram Wright hides his face as he leaves the court for prison on Tuesday. (iWN photo)

The Lowmans Leeward man who, in April, examined his then common-law wife’s vagina in a public restroom then beat her after accusing her of being intimate with another man, has been jailed.

Malina Charles, 53, told the Kingstown Magistrate’s Court during the trial on Monday that she had invited her then partner, Bertram Wright, 57, to examine her vagina inside the public restroom at the Leeward Bus Terminal in light of his repeated accusations.

On finding that the woman’s vagina was “slippery”, Wright proceeded to beat her, resulting in injuries to her face and bruises about her body that resulted in a visit to the emergency room.

On Monday, Wright did not acknowledge that he and Charles’ three-year relationship, their second, ended with the April 20 beating.

Charles told the court this was the case, but Wright maintained that was not the case, saying that they had merely had a “misunderstanding”.

During sentencing hearing, Charles told the court that she had reported Wright’s abuse to the police before but, rather than pressing charges, had asked them to talk to him.

The couple had been together years ago in a relationship that produced two children.

Charles told the court that when she and Wright were first together, he was not abusive but he became that way a couple months ago.

The woman said Wright would accuse her of having sex with her co-workers, and, among others, a watchman whose name he doesn’t even know.

Charles, a cleaner at the market in Kingstown, said Wright would accuse her of pretending to go to work, but, rather than doing so, going on the steps at the market and performing oral sex on men.

Whenever a man greets her, he would accuse her of being in an intimate relationship with him and having had sex with him, the woman told the court, adding that Wright is very demeaning and has even called her a vagrant.

His abuse includes having called her “a bitch, a slut, a whore…, a lesbian,” the woman said.

“He telling me I not working  — and every Friday when I [am due] to get pay, he coming in the bank behind me and he want [to] tell me how I must spend my money, what I must do with it.”

Meanwhile, Wright told the court that Charles’s statements were lies.

“Well you tell me the truth, then,” the magistrate said.

Wright said he and Charles have two children and three grandchildren.

He said that when their relationship first ended, she went to the bush to plant vegetables.

The man said Charles contacted him saying she had borrowed some money and he should come back.

He said he refused as she had been in a relationship with someone else.

Wright said that after some time, he came back to Kingstown to live and Charles came and showed him “certain things” and they rekindled the relationship “through the children and them”.

He said that they were working together going hand-in-hand and he came by some money, which he used “to put on the roof”.

“From the time I put on the roof, is bare problems,” Wright said, adding that Charles’ sisters would intervene whenever “me and she get a little talk” (disagreement).

He complained that Charles is not taking care of the three grandchildren, who are living with them.

Talking about these things is what causes the disagreement, Wright said, adding that Charles goes to work and does not leave breakfast for the children.

“From de time she get pay, de fuss (first) thing she buy is ah pack ah cigarette,” he said of Charles, who admitted to the court that she smokes cigarettes.

“The children them going school without books in their book bag. She ain’t studying that and these are the things I talking ‘bout because is my family I see going down the drain,” Wright said.

Wright said that last year, Charles went to the Family court “and get a paper which saying I must keep ah thousand miles from she”.

He said he was the one who pushed for the case to be heard and he told the Family Court that Charles could keep everything, if she wishes but the court told him that’s how things work.

A message to abusers, society

Wright said the court sent them for counselling but after the second session, Charles said they are not going back.

The magistrate said he was seeing a note in the case file saying that Charles was not interested in counselling.

However, the prosecutor told the court that the Family Court had informed her that when the matter went before the court for the first time, Wright went to court and said Charles had no interest in the matter.

However, when the court contacted Charles, she said she has interest in pursuing the matter before the court rather than merely having it resolved through counselling.

Samuel told the court that Charles had told the Family Court that she was tired of Wright’s abuse.

The prosecutor said some persons might see the case as a joke but it is a serious issue that Charles is going through.

She said that Wright needs to be taught that he should not beat his partner, adding that the prosecution was asking for a custodial sentence.

In handing down his ruling, Burnett said that domestic issues are very difficult to deal with.

“But, Mr. Wright, you were convicted based on the evidence in this matter, and I have to sentence you.”

Charles told the court that Wright had told her that he would “dissect my body” and put her head at her mother’s gate and her other body parts elsewhere.

Burnett told Wright that in sentencing in those matters, a message must be sent to him and other persons in the society.

“Mr. Wright, the offence you have been convicted for is happening a bit too often in St. Vincent — violence against women, mostly, and maybe men to an extent. And when persons are convicted, the court has to send a message. A message to you, first of all, and a message to others who may contemplate committing offences like these,” Burnett said.

The maximum penalty for the charge was five years in prison.

4 replies on “Jail for man who searched vagina, beat woman”