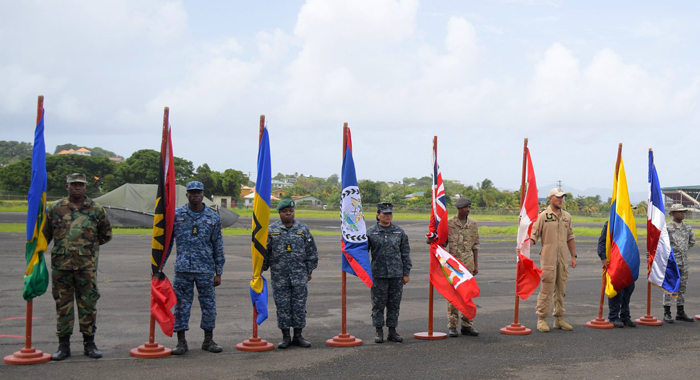 Some of the countries participating in Tradewinds. (Photo: API/Facebook)

The National Emergency Management Organisation (NEMO) is participating in Phase 2 of Exercise Tradewinds 2019, which runs until next Friday, June 21.

Several aspects of St. Vincent and the Grenadines’ (SVG) readiness to respond to natural disasters will be strenuously tested during the military exercise in which 19 countries are participating.

One of the objectives of Tradewinds is to test the national emergency response mechanisms, and NEMO is conducting a simulation (mock drill), which involves scenarios related to an eruption of the La Soufriere Volcano.

As such the National Volcano Emergency Plan has been activated and this involves issuing information and news releases to the public via NEMO’s Facebook page, website, emails, radio stations, the mobile application CAP.CAP and other communication modes.

In addition to this, NEMO personnel will be visiting communities close to the volcano to disseminate alerts.

The mock drill will last several days and is intended to test the preparation and response of all agencies and communities located near to the La Soufriere Volcano.

NEMO is asking the public to note that the mock scenarios are NOT REAL and there is no need for alarm or panic.

“There is currently no unusual activity at the La Soufriere Volcano. We look forward to the support of the public as we work towards increasing our resilience to volcanic hazards,” NEMO said.

Addressing the opening ceremony of Tradewinds at the tarmac of the decommissioned E.T. Joshua Airport on Friday, Head of Exercise Tradewinds Edward Rogers, said the training exercise is vital and beneficial to all participants.

Rogers, who is deputy division chief of training and exercise at the United States Southern Command (US SOUTHCOM), thanked SVG for its warmth hospitality and said, “Tradewinds is an enduring promise between the United States of America and the Americas.”

He said the exercise builds “friendships and trust in partnerships and solidarity”.

Rogers disclosed that the exercise has evolved over the past 35 years of its’ existence and stressed that training is given for both land and sea in areas such as security operations, humanitarian assistance and disaster relief operations.

SVG’s Commissioner of Police, Colin John thanked US SOUTHCOM for being a major sponsor of Tradewinds 2019 and outlined several benefits to be derived from the exercises, including networking and training.

Tradewinds is held annually and was last hosted in SVG in 2004.