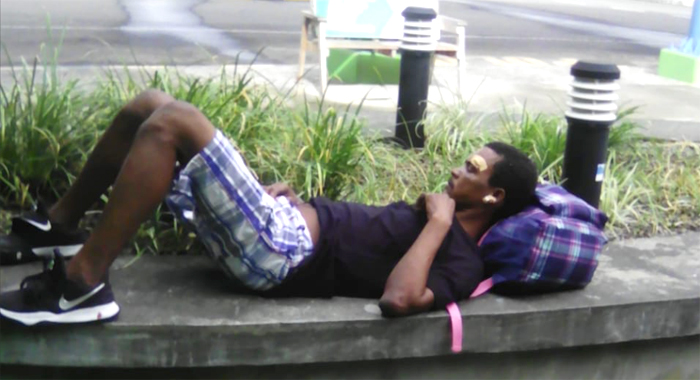 The injured Richardo Stewart lying on a wall outside Argyle International Airport awaiting transportation to a hospital Friday morning.

A Union Island man died at the Milton Cato Memorial Hospital (MCMH) Saturday evening, three days after being stabbed during an altercation.

Dead is Richardo Stewart, 35, of Jerome, a village in the southern Grenadines island.

His mother, Jacinta Stewart told iWitness News on Sunday that she understands that her son was stabbed at a bar and restaurant in Ashton, the island’s main town.

Stewart said she understands that her son was keeping the company of the female bartender when another man from the island entered the business place.

She said she was told that her son ordered some food and the man asked him to pay for something for him.

Richardo reportedly refused and an altercation ensued, leading to the man stabbing him to the left side of his head, behind his left ear, and to his back.

Stewart said that she and her son live in different houses on the same compound and she learned on Thursday morning that he had been injured and was warded at the hospital on the island.

She said she chartered a plane and flew her son to St. Vincent on Friday, arriving at Argyle International Airport shortly after 7 a.m., after the 20-minute flight.

Stewart said her son was lying on a wall outside the airport for more than 30 minutes before an ambulance arrived.

He was taken to the Stubbs Polyclinic, then transferred, around 3 p.m., to MCMH, the nation’s main healthcare facility.

At MCMH, Stewart underwent surgery and was later transferred to the Intensive Care Unit of the hospital.

Stewart said a doctor called around 6 p.m. saying her son had died.

She said the doctor said her had damaged kidneys, punctured intestines and had developed an infection.

The mother said that she understands that the man who reportedly inflicted the stab wounds on her son has been on the run since.

With the death of her older child, Stewart now has a 33-year-old son.

24 replies on “Union Island man dies after being stabbed”