‘When these guys behave like this, there are persons in society who make excuses for them. All sorts of different reasons they are proffering for their behaviour…’ 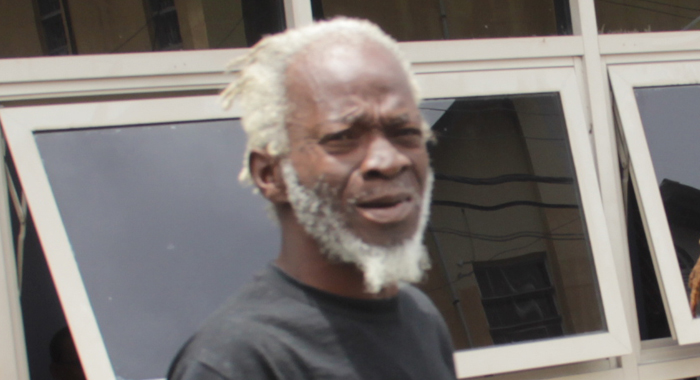 The magistrate’s comments came as he considered sentences for Frankie Lovelace, who has a history of shoplifting. (iWN photo)

Senior Magistrate Rickie Burnett said there are some members of the public who complain when the court punishes certain offenders, such as repeat shoplifters.

He made the point during the sentencing hearing, last Friday, of Paul’s Avenue resident Frankie Lovelace, who pleaded guilty to charge that he stole one brass hose nuzzle from Gibson Building Supplies at Bay Street, Kingstown, one day earlier.

After presenting the fact at the Kingstown Magistrate’s Court, the prosecution presented Lovelace’s criminal record to the magistrate.

Without looking at the multi-page document, Burnett told Lovelace that on his last appearance he had been charged for something similar.

Lovelace confirmed that this was the case.

“That’s how much I remember you — without even looking at your record,” said Burnett, who later realised that that conviction was yet to be entered on Lovelace record.

Lovelace told the court that he turn 54 on July 9, which he noted is Carnival Tuesday.

The magistrate, upon perusing the man’s record, noted that he has a history of shoplifting.

Lovelace told the court he is a carpenter.

“So every time you need something to do your work, you just walk into the store and walk out. That’s how you operate?” Burnett asked.

Lovelace said that is not the case but “nothing outside to do”, adding that said he intends to take stock and do better.

The magistrate, however, said he did not believe Lovelace.

“What do you do with a man like this?” Burnett reasoned, adding that that has been Lovelace’s modus operandi over time.

“And when you send them to prison, people feel that you should not even do it. A man that is  — I can call him a thief, because he has been convicted many times.”

“But are you changing?” the magistrate retorted, and Lovelace said, “Yes. I will.”

“When these guys behave like this, there are persons in society who make excuses for them. All sorts of different reasons they are proffering for their behaviour and they want the magistrate to be everything: social worker, psychologist, they want me to get into their minds, get into their social circumstances, everything they want me to do when I set about to punish them.

“Sometimes, they don’t even want me to punish them for their crimes. But say what you want, I’m going to do my job…”

He asked prosecutor Corporal Shamrock Pierre to address him on sentencing.

The prosecutor noted that Lovelace had said he is a carpenter. “This is not a tool of his trade so I don’t know what he was going to do with this. And, as a carpenter, I believe that his skill will be well appreciated behind the walls.”

Pierre said imprisonment is a form of rehabilitation, adding that there is a carpentry programme in the prison.

“I am not sure that at his age we can rehabilitate him,” he said, adding that former Senior Magistrate Donald Browne used to use the term “SSS”.

“A sharp, short shock will do him well for this carnival and his birthday,” Pierre said.

“Then the persons in society who know more than us, what are they going to do and say? ‘The magistrate send a man to prison for an item, $30.65’,” Burnett said.

He said the commentators would then start to count the number of persons in prison and the cost of feeding and clothing the prisoner.

“But seriously speaking, Mr. Connell, what do you do with these guys?’ he asked defence counsel Grant Connell, who happened to be sitting at the bar table.

The lawyer said that was “a good question”.

The magistrate said that asking the man to compensate the hardware store is no punishment at all.

He said that if Lovelace had the money he would have paid for the item. “When persons are allowed to steal and they come to court and the court says, ‘Pay him back.’ What is that?”

Lovelace repeatedly begged the magistrate to give him “a chance”, saying that if that is done, he will never appear before him on a charge again. “Man, look, I don’t believe one word from you,” Burnett said, adding that Lovelace had appeared before him two months earlier and had said the same thing.

Based on the Lovelace’s record, the magistrate asked Lovelace if he was still on cocaine, and the man said no.

He then told the magistrate that there is “no work outside”.

“Well, if there is no work, you can’t steal,” the magistrate said.

“Then you could give me some work to do,” Lovelace said.

Burnett then returned to Connell, saying that the lawyer was ducking the question.

Connell said that jailing Lovelace would put “unnecessary strain on the already stretched finances of the economy”.

He asked about attachment to different institutions, saying that, as punishment, maybe Lovelace could be made to work for the Sanitation Department.

The lawyer suggested that Grantley “Ipa” Constance, a supervisor at the department and a Paul’s Avenue resident could be asked to come to court and give some insights into what persons like Lovelace could do for his department as punishment.

The lawyer further suggested that repeat shoplifters could be banned from places they have stolen from.

Burnett said that when presiding over a case his ideas “is not to quote-unquote full up the jail as someone suggested within the past 48 hours.

Connell said that Lovelace had a point about jobs.

Burnett said he might agree that there is a shortage of jobs in SVG, but asked if that is a licence to steal.

Connell said that while it is not a licence to steal, “the court can’t be burdened with people like this.

“You do get quite a name,” he said, adding that when he prosecuted a man for stealing oranges from his farm, he was told that he was wicked.

The lawyer suggested that a month of reporting at 5:30 a.m. to Constance at the Sanitation Department would help Lovelace to sort himself out.

He said that if Lovelace does not turn up for up a morning he can exercise his carpentry skills in prison.

The magistrate said he could do that and call it community service, but he has to get Constance in court.

Connell said that the community, the church and other persons have to help the court.

“I’ll bring Mr. Constance here but I am mindful that his main priority now is to make semi-finals,” the magistrate said, referring to the national calypso monarch competition.

He then adjourned the sentencing to Monday and granted Lovelace bail in his own recognisance.

Constance was among eight persons from his On Tour Calypso Tent to make it to the semi-finals, after preliminary judging last week.