‘I do not want to go outside the statute because that might not be so correct.’ — Senior Magistrate Rickie Burnett 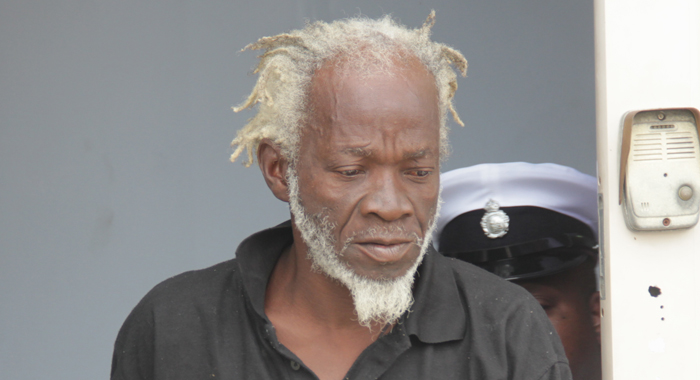 Freddie Lovelace, a habitual shoplifter, was jailed for stealing an EC$30.65 brass hose nozzle from a Kingstown hardware. (iWN photo)

A recent case before the Kingstown Magistrate’s Court has revealed the extent to which the laws of St. Vincent and the Grenadines have not kept up with the expectations of the society as it evolves.

The case involved Frankie Lovelace, 53, a carpenter and repeat shoplifter, of Paul’s Avenue, Kingstown, who was to be sentenced for stealing.

While considering sentencing options, Senior Magistrate Rickie Burnett, noted that he could not order that the man perform community service, since the law makes no such provisions.

“I am a creature of statute. I have to give effect to the statute before me. How do I get around this?” he mused.

Last Friday, Lovelace was to be sentenced, having pleaded guilty to charge that he stole one brass hose nozzle from Gibson Building Supplies at Bay Street, Kingstown, the previous day, June 13.

Burnett noted that Lovelace was a repeat offender and that members of the public often complain when the court punishes people for such crimes by sending them to prison.

Grant Connell, a lawyer who was at the bench but was not involved in the case, suggested that Lovelace be ordered to do one month’s community service at the Sanitation Department.

The magistrate adjourned the hearing to Monday to hear from Grantley “Ipa” Constance, a supervisor at the Sanitation Department, about the feasibility of the suggestion.

The magistrate further granted Lovelace bail in his own recognisance and ordered him to return to court at 9 a.m. Monday.

However, when the matter was called at 9:45 a.m. on Monday, Constance was present, but Lovelace was absent.

Connell was also at the bar table and so was lawyer Jomo Thomas, who was before the court on another matter, but whom the magistrate said he wanted to hear from on the sentencing issue.

Constance told the court that the community service idea is a workable one.

He said that while he is not the person fully in charge of the Sanitation Department but he has been working there for 34 years and thinks he can make such a suggestion.

He said he could inform the CEO of the thinking of the court adding that he (Constance) would be the person in direct supervision of the offender and would report to the court.

The magistrate said it gives him no pleasure to send young persons to prison, but sometimes his hands are tied.

Having heard from Constance, the magistrate told the lawyers at the bar table that there might be some need for amendment to the legislation, saying that “punishment” is the subhead of chapter 3, section 23 of the Criminal Code.

He said that based on that section, the sentences the court could impose are: death; imprisonment; fine; payment of compensation; finding security to keep the peace and be of good behaviour or to come up for judgment; probation under the Probation of Offenders Act; forfeiture of articles involved in the offence; costs; in the case of a male person of any age, corporal punishment in accordance with the provisions of the Corporal Punishment of Juvenile Act; a supervision order under section 20 of the Criminal Procedure Code; and any other punishment expressly provided for by any law for the time being in force.

The senior magistrate also referred to the provisions of Section 17 of the criminal procedure code.

The senior magistrate noted that under the Criminal Procedure Code, when a court convicts any person of stealing or destroying any property and the property stolen or damaged is any tree, sapling, shrub, underwood, plant, root, fruit, vegetable, cocoa, nutmeg, mace, cotton or any cattle, the court may order that such a person be placed under police supervision for one year.

“It does not speak to stealing from Ace and Coreas,” he said, referring to two hardware stores in Kingstown.

‘between a rock and a hard place’

The magistrate said that having heard from Constance and having regard to the law, he was between a rock and a hard place and that is why he spoke about amending the law.

Connell said that if the court has to wait for the laws to change, it would forever be stuck “in a quagmire”, adding that nation’s laws “left by the colonial masters have not changed”.

He suggested that the court impose a sentence on Lovelace and suspend it and engage what Constance suggested.

Connell said this would still be “community service per se and then maybe we wait on those who change the laws to make it easier on the court.

Connell said he has seen it done in other courts where persons are sent to a carpenter shop for some time then the court receives a report.

“But something hangs over his head,” the lawyer said.

But Burnett said that while maybe that might have been done, he is one to stick to the statute.

“That’s my guide. I do not want to go outside the statute because that might not be so correct,” Burnett said, adding that magistrates do not have the same powers as High Court judges.

“This is a matter that Parliament must address,” Burnett said.

On this, Connell then said he thinks that the ears of Parliament are in court, referring to Thomas, who is also speaker of the House of Assembly.

The magistrate said that was not quite the case and Connell said when the honeybees leave the hive they have to return.

“I hope he doesn’t have to jog on this one,” Connell said, taking another jab at Thomas, referring to how Thomas had ruled on a matter in Parliament.

Thomas told the court he was not sure what Connell was attempting to do.

“I am here as a lawyer. I am not here as anything else,” Thomas said, adding that Connell’s allusions “are above my pay grade”.

Too many jailed for minor offences

Thomas said he sees no purpose at all in trying to let a repeat offender do community service.

“I don’t think that works. Because the sentence is not just for him it is for other people,” he said, adding that this would help persons to see the possible consequences of wrongdoing.

Thomas said that, as a general principle, however, there are too many instances where people are sent to prison on minor offences.

He, however, said prison seems to be the best option for Lovelace, who has a record of similar charges, is asked to come back to court, and doesn’t show up.

In other jurisdictions, with some of the offences on which people are sent to prison in SVG, the court would do an adjournment in contemplation of dismissal, Thomas said.

The lawyer said this is something that can be considered but noted that the magistrate correctly said that he is a creature of statute.

“And if the statute does not provide for something, it would be difficult to go beyond it,” he said.

Thomas said that one judge told him recently that he is not concerned with being overturned by the court of appeal but with doing his job and doing it well.

He said that the magistrate was within his ambit to do certain things that are reflective of contemporary conditions.

“Too many of our laws are 40, 60 years old,” Thomas said, adding that the section of the criminal code might have been reflective of a society that was very agricultural.

He, however, said that the country is becoming more service-oriented and that might explain why people are stealing locks rather than coconuts.

When Lovelace turned up to court at 10:21, he was sentenced to one month in prison.

This means that Lovelace will spend, in prison, his 54th birthday on July 9 — which he noted last Friday is Carnival Tuesday.

The magistrate also made a restitution order for the stolen item.