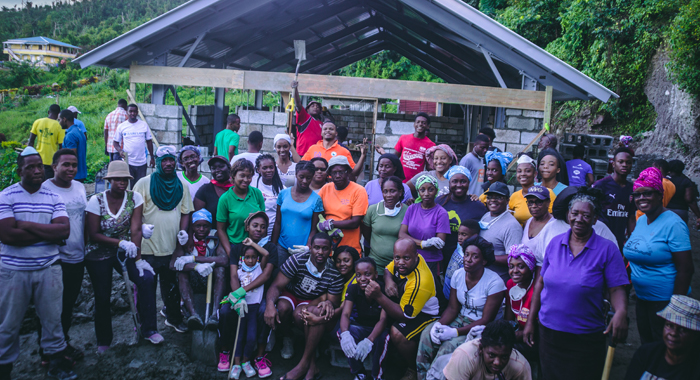 On July 7, the campers tugged their suitcases onto the compound of the Delices Primary School in St. Patrick, Dominica.

It had taken them approximately 15 hours to make the trip from from Kingstown, St. Vincent.

“Does the school have Wifi?” the campers asked, glancing around worriedly.

“Wifi?! You all lucky you have light and water. Wifi is pushing it,” Bert, one of the van drivers, quickly retorted.

Bert, a Dominican, unlike many of the campers who were in the country Dominican for the first time, was aware of what transpired when Hurricane Maria ravished the Windward Island in September 2017. For him, no Wifi was no tragedy; if anything, it meant they will not be distracted from the mountain ranges that flanked the school on both sides or the White River that flowed down from Victoria falls just west of the school.

They were now in Delices looking up at the clouds as they brushed the mountain peaks; feeling the gentle — and sometimes cold — breeze. The village’s name derives from the French word délices, translated as “delights”, or délice meaning “a delightful thing” and truly, a delightful thing was about to unfold.

Hurricane Maria was the worst natural disaster on record to affect Dominica, the deadliest Atlantic hurricane since 2004, the 10thmost-intense hurricane on record and the most intense tropical cyclone worldwide in 2017.

With the climate changing and storms becoming stronger, the spirit, resilience and determination to rebuild stronger must increase in equal proportion.

Therefore, the St. Vincent and the Grenadines Mission of Seventh-day Adventists, through its Youth Department, planned and executed a Senior Youth Mission Camp themed IMPACT Dominica 2019. Seventy-three campers took the voyage and launched the mission.

One of the main objectives of the camp was to rebuild the Boetica Seventh-day Adventist Church which was destroyed by the hurricane.

Of the 36 Adventist Churches on the island, all were damaged and only eight were operational immediately after the passage of the hurricane.

As of July 2019, the South East District remains without a church building and services for Boeticans are held at the home of one of its members.

By the grace and for the glory of God, the campers were able to lay all the concrete blocks for the church in three days.

The Maranatha International Volunteers started the project and the SVG Mission of SDA were very happy to partner with them to see this project through to completion.

The mission camp was not all work as Dominica remains the “Nature Isle” of the region — damaged but beautiful!

This afforded the campers an opportunity to experience the food, culture and warmth of their Dominican brethren and the indigenous Kalinago people.

Pastor Brent St. Jean, youth director and Jemalie John, camp director and president of the Adventist Youth Ministries Advisory Council (AYMAC) thanked all who made the mission a success.

“To the campers who braved the ocean in the dark of night and sacrificed their usual comforts; to the many masons who gave of their skill — a heartfelt thank you. Special mention is made of Bequia Express Company who transported the campers at a reasonable cost. The SVG Mission intends to bring this project to completion by the end of 2019 and invites all who are desirous of making a contribution to contact the Youth Director at [email protected].”