50 years for man who raped woman in front roommate 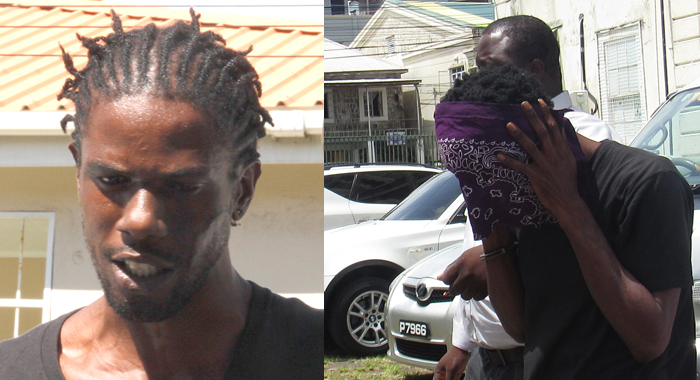 Clayton Caine hides his face as he is escorted to prison last Friday. He is seen at left in a 2017 iWN photo.

A man who, armed with a gun, burglarised a house and raped a woman in the presence of her female roommate has been sentenced to 50 years in jail for his crimes.

Justice Brian Cottle handed down sentences totalling that amount on Clayton Caine, on Friday at the High Court, in Kingstown.

However, Caine will only spend an additional 23 years and nine months in prison, as the sentences will run concurrently and he has been on remand for two years two months and 12 days.

Caine was found guilty of possession of firearm, aggravated burglary, and rape

On April 13, 2015, the complainant, who lived in an apartment complex, was awakened when she felt the sheet being pulled off her body.

Caine had burglarised the woman’s house, raped the woman, who, in an attempt to dissuade him, told him she was menstruating and that she was pregnant.

The woman was able to recognise Caine, having seen him earlier that day.

Blood and saliva samples was tested and proved to be Caine’s.

Caine however denied the allegation, saying that he did not trespass and that the sexual encounter was consensual.

The court heard that the victim continues to struggle with the effects of her ordeal, which includes recurring nightmares.

She often cries herself to sleep, no longer goes out by herself, is always alert and is ashamed to talk about her experience.

The woman feels humiliated and degraded and no longer trusts people as she did before, a victim impact report indicated.

In mitigation, Caine rambled on for about 10 minutes, telling the court:

“Me is not a criminal element in my community. Me is no sexual predator out dey, yuh worship! One day I feel to hold up my end of the bargain, the people took it as a crime and I never get a firearm in my life nor break into people place, and I here found guilty of something I accused of”.

He said he had only been convicted once of “breaking into people place”.

Caine continued: “Police ain’t ask me if I was there or if it happened, they start implying a set ah things. I speaking the truth in a nice way, me no touch no girl pon no bottom and me no break in nobody place wid no gun.”

In outlining the aggravating features of the case, Justice Cottle said the rape happened in the presence of the roommate and that a weapon was used.

On the firearms count, he noted that Caine had previous convictions for possession of ammunition without a licence.

Regarding the count of rape, the judge noted that it included acts of extreme degradation, the assault was prolonged, and Caine had threatened violence.

In handing down his sentence, Justice Cottle noted that Caine has nine previous convictions.

Justice Cottle sentenced Caine to 15 years in prison for burglary, 25 for rape, and 10 for possession of a firearm.