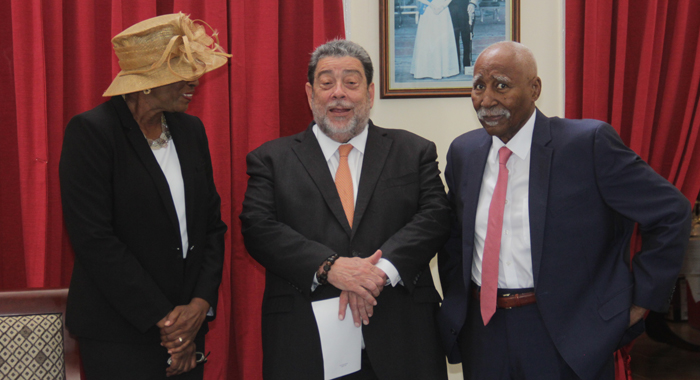 Dougan took the relevant oaths at Government House on shortly after 9 a.m.; about nine hours after Sir Frederick demitted the office, which he had held since Sept. 2, 2002.

Gonsalves said it was “a wonderful” day, adding that the country was witnessing the changing of the guard at its highest office in a very dignified manner.

The transition was being done “in a manner befitting of our Caribbean civilisation and its Vincentian component,” he said, adding that in some countries, battalions and installations of soldiers are usually outside the gate to remove one head of state and install another.

“Thank God that is not the case,” the prime minister said.

He noted that the Constitution gives Her Majesty Queen Elizabeth II the authority to appoint her governor general.

However, in doing so, the queen has to be advised by the prime minister.

Gonsalves said he wants to assure Vincentians that in submitting his recommendation to Her Majesty that he took the responsibility seriously.

“I consulted widely among persons who are present here. Those with whom I have consulted will know the extent of the consultation,” the prime minister said.

He said there is one person absent with whom he discussed the matter on more than one occasion even on his sick bed.

“Sir Vincent [Beache] a very wise man and thank him for his advice,” Gonsalves said of the former minister of national security.

He assured the nation that it has “an excellent Governor General in Susan Dougan”.

The prime minister said Dougan has demonstrated her academic ability, adding that a number of people don’t know she is a scientist, holding a degree in chemistry

“They think she is a good Anglican girl who became headmistress of Girls High School by chance,” Gonsalves said, adding that Dougan has postgraduate qualifications in education and her work in the society, which she does quietly, is widespread.

He said that after serving as principal of Girls High School, Dougan became chief education officer, and along with then permanent secretary Laura Browne, did remarkable work.

At his point, the prime minister asked the gathering to avoid looking at Dougan, saying that she is uncomfortable with him speaking about her accolades.

Gonsalves said Dougan was “moving from one foot to the other” and wanted him to get on with his comments. He, however, said the nation must know who is appointed governor general.

The prime minister said that after leaving the Ministry of Education, Dougan   became cabinet secretary and he saw, at close hand, her concern for the people of SVG and the region.

He said that when he demits office and does his writing he would give his opinion on who was his best cabinet secretary.

He said she is a very dedicated Anglican and a devoted wife and mother;

“She is a fierce defender of her family, her children, her husband. She is in the tradition of the great mother of our civilisation.

“And, of course, the first husband. I always have to correct people…” Gonsalves said, adding that people often refer to his wife, Eloise, as “the First Lady”.

Gonsalves, however, noted that he is the prime minister and not the governor general.

“I can say there is no confusion now. He is the first husband,” he said of Dougan’s husband.

The prime minister said he has known the new governor general, who, like him, is from Colonarie, since she was a young girl.

“I can tell you this, I can still see her when she was 13 or so, tall, beautiful; I am back home from university and she had a black bag in her hand coming up the road to buy bread,” Gonsalves said, adding that he want people to know the heights to which Dougan has travelled and her own simplicity.

He said that in his days, his mother, who was shopkeeper would give customers 13 bread — a baker’s dozen — when they came to buy a dozen bread.

He said that when Dougan became cabinet secretary, she told him he did not know that in addition to the baker’s dozen, his mom would give her an extra bread.

That extra bread was for Dougan to nibble on her way home, Gonsalves, said, adding that, years later, she will tell her students not to nibble bread in the road.

“… there has been a long connection between us and I know the family very well and I know Colonarie is rejoicing with us,” he said, adding that it is the first time in the history of SVG that the prime minister and governor general are from the same village.

Gonsalves, however, said that if former governor general, the late Sir Charles Antrobus, was born in Bequia, he and Sir James Mitchell, the prime minister at the time, would have been from same community.

“I have absolutely no doubt that she will fulfil the responsibilities laid out in the Constitution and will fulfil them with the highest level of professionalism,” Gonsalves said, adding that he was confident that Dougan will be an active Governor General in the way that Sir Frederick has been.

He said he was composing a letter of thanks to Sir Frederick, which has gone through several drafts.

The prime minister said he wants the letter to be one of the highest quality and to be supremely elegant.

The WPP offers critical care of developed world quality to persons 21 and under in SVG, with further treatment in the United States, if needs be.

He said that all the credit for this belongs to Sir Frederick, a retired cardiologist.

Gonsalves said that shortly after Sir Frederick became governor general, he asked if he could drop by the Prime Minister’s officer on the way to Government House.

The prime minister said he told the governor general that he could not, noting that the Queen does not go to Number 10 — the officer of the British Prime Minister.

Gonsalves said he told the governor general that if he (Sir Frederick) summoned him, he (Gonsalves) would be there immediately.