Re-calculating: the Argyle-Dubai non-stop now with stop in Bridgetown? 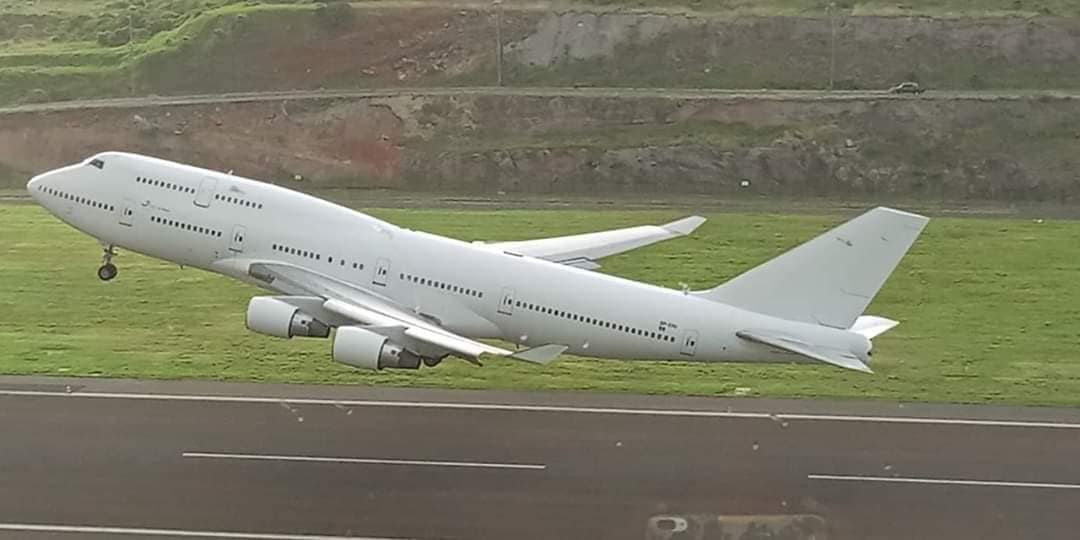 Vincentians do not usually get a straight story.  That’s because the stories themselves are usually not straight.  The latest is that a local company bought — or leased — a jumbo jet to, er, service, an Argyle Dubai nonstop route.  Seriously? Gee whiz.  That’s a hair-brained scheme if ever there was one.  Don’t look at me, I got it from the media.  And rest assured, the media didn’t invent it.  Churchill, more diplomatically, would have said, as he did on a different matter, it is a riddle wrapped up in a mystery inside an enigma.

And if the orange racist, you know, the blithering oaf in the White House?  If he saw the 747-400 sitting at Argyle in the forlorn hope of flying a whole 500 or so passengers at a pop — nonstop — from Argyle to, well, anywhere, he’d say, as he said about another thing, What you are seeing and what you are reading is not what’s happening.  Only this time it would be true.  A Trumpian rarity, indeed.

I am not well enough acquainted with Churchillology to put the pieces of his gem together on this one.  I don’t feel bad, though, because what I see and read about this SVD DXB nonstop hoax would confuse Churchill more now than what confused him back then.

Things like these.  I’m sure he’d ponder: (a) what does One Caribbean, a 2-year-old one-plane, a 19- seater, charter service, know that other airlines don’t?  (b) He’d ponder too, magnifying glass in hand, the size of the barely discernible “One Caribbean” logo.  Huh, what logo?  But it is (c), the task, rich in difficulty, of getting the albatross registered.  Man, I believe it have the lot of them in a powerful stump. It is a subplot so discombobulating and convoluting that it seemed to have required a manoeuvre of influence-peddling intervention, which is entitled to no respect.

On (a), I grant that One Caribbean owners are made up of experienced, otherwise sober-minded pilots.  But a jumbo plane to service a nonstop Argyle to Anywhere is a bit of a stretch.  It is more mania that sober-minded, clear.  And (b), if your taxi service consisted of a two-seater moped, yesterday, and today you added a stretched limo to your fleet, tell me how big and flashy you go make your logo?  It would reflect your confidence and zeal for the venture and pride in your shiny new limo.  One Caribbean’s Lilliputian logo is testament that they don’t feel too brash about neither.

The hangdog logo came before the onerous task of registration, so, perhaps the experienced pilots anticipated the impossibleness of registering their conundrum — in St. Vincent — and designed the logo for easy removal when time came.  Watch, the FAA done have the ECCAA on tender hooks with a previous cunning scheme; now the 747 have the ECCAA on the verge of seeing a 90s redux it have themnervous and faint of heart.  It go learn some of them good.

We’ve seen the MO before.  A grand entrance — a communal baptism in the case of the 747 — followed by fifteen minutes of fame, then, gone; like the wind.

Do you remember the obsequious windbag from Guyana?  Gerald Gouveia?  He came with the same kind of homage as the 747 did.  Was given a soapbox to feed us his let them eat s—t crap while stroking our (not mine) egos at the same time.  He bragged how his revered entrepreneurial noseled him here to kick-start Argyle.  Peddling false hopes to desperate people, he promised a Valentine’s Day gift of a planeload of Cuban shopperson opening day. That his rich Cuban shoppers would spend “2 or 3,000 U.S. dollars”.  Apiece. It was the most ignorantest kind of words.  Then, puff, he was gone; like a thief in the night.  We haven’t seen hide nor hair from him since.  Thank Jah.

And Stanley Too?  The obnoxious Malaysian grifter who came under the auspices of Rene Baptiste?  He came gaslighting the constabulary like a pompous jackass and bearing suspiciously contrived red-coloured gifts with promises of more.  Ay, but he stipulated that the recipiency must kowtow to him to get the more.  Talk about obnoxious, and pompous and jackass. Then, like Gouveia, he was gone.  Like a thief in the night.

These flimflammers lie with impunity and are as deceptive as their audience would allow.  No motive, no moral higher than enfeebling the enfeebled are involved.  Would we be not rid of them?  With the latest, the flying machine and a route straight out of a science fiction writer’s fantasy, it is not my bet.

Still, don’t doubt that Gouveia and the 747 sitting for six weeks at Argyle would have served a purpose.  And Stanley Too?  Well, you go have to ask Rene bout the fleeting hustler who just grazed our shores.

When the plane left for greener, or more practical, pastures, One Caribbean took from us more than a plane.  St Vincent’s First Boeing 747-400 Now Registered In Barbados, put us in the familiar position of, “also ran”.  Ugh.  So, it is registered in Barbados.  Now what? BGI DXB nonstop?  Try that dead end, non-starter claptrap on the Bajan people nuh.

The reasons for the leaving — as told — is the art of subterfuge, an act of self-abasement and a lesson from a professor on the use of the non sequitur.  We were told that the ECCAA was taking too long to register the difficulty.  Really?  Must be too long for One Caribbean’s haste.  But register where?  St. Vincent or Barbados?  Which really, really was the original plan?  If it was St. Vincent, it would take, like, forever.  And yes, forever is too bleeding long.

Then, in the same breath we were given comfort in One Caribbean’s application to register a Saab 30-seater.  But whoa, dread.  Except on a non sequitur on steroids, how did we get from a Boeing 747-400 to a Saab 30-seater?  Lordy, who pun what page?  And when?

Make no mistake, these second-hand scam artists do not stand on their own.  Gouveia did not come withan agenda.  He came onan agenda.  He did not walk with his soapbox.  He was given one — his own à la carte carpe diem box.  Too, too: the colour of his gifts, red, was not a coincidence.  But it backfired.  “Let them eat s—t” is a theme; it is encouraged and celebrated — and probably choreographed.

It was sheer lunacy to think the 747 was ever going to be registered here.  It was bicycle to fish.  If I thought I’d get an honest answer close, I’d ask: why did the 747 come here in the first place?

9 replies on “Re-calculating: the Argyle-Dubai non-stop now with stop in Bridgetown?”