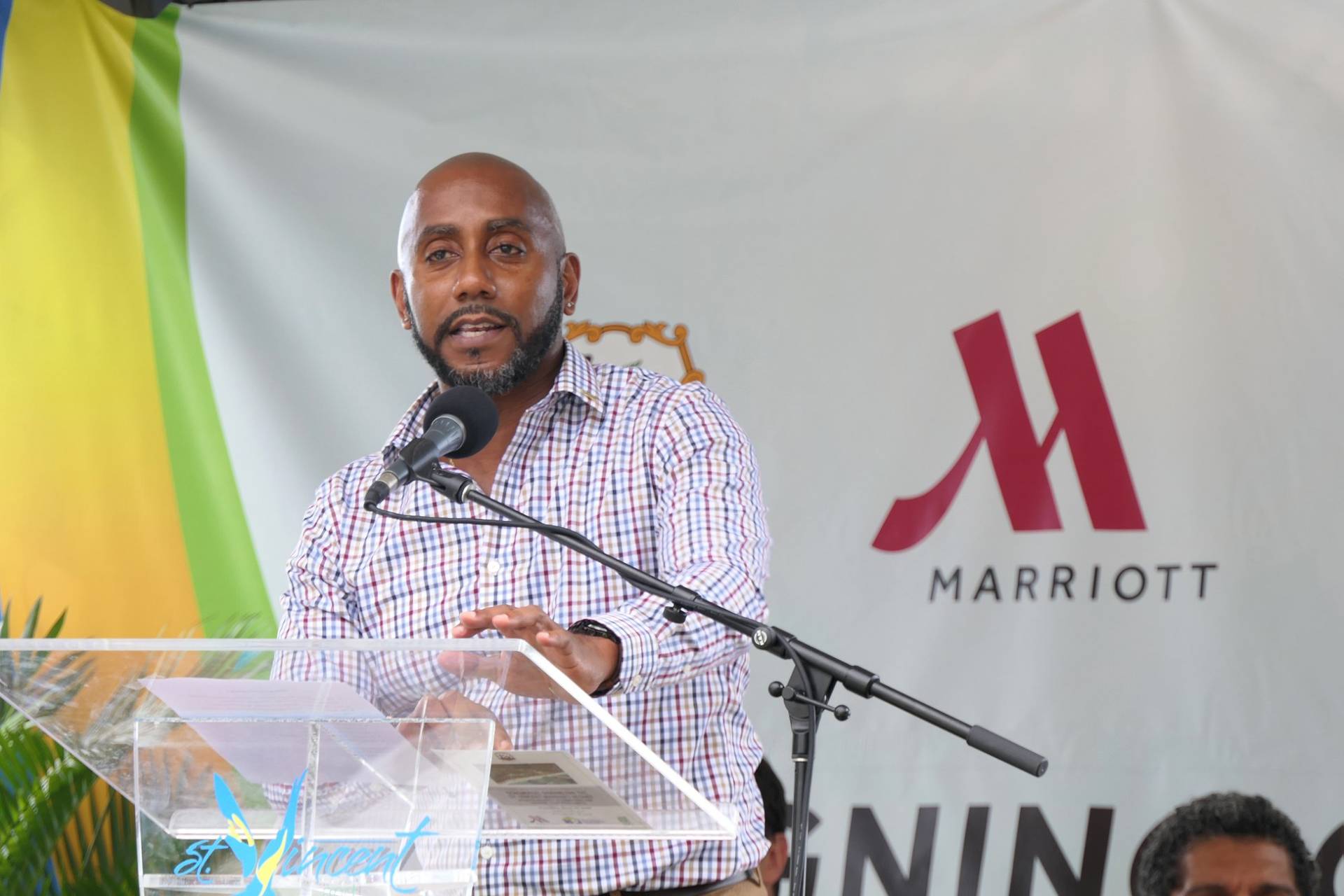 Head of the St. Vincent and the Grenadines Tourism Authority, Glen Beache speaking at the signing ceremony at Mt Wynne on Tuesday. (Photo: Discover SVG/Facebook)

Head of the Tourism Authority Glen Beache, said that when the government decided to build Argyle International Airport (AIA), some persons said that a small plane would not land there.

When that happened, they said a LIAT aircraft would not be able to land there.

That was realised and they said no big plane and then no recognised airline, he said.

“They came in,” said Beache who, after years of trying, had failed to convince any international carrier to fly to Argyle International Airport by the time it opened in February 2017, six years behind schedule.

He, however, told a signing ceremony in Mt Wynne, on Tuesday, that there would be a similar response to the US$50 million, 250-room hotel that the government plans to build at Mt Wynne, to be managed by Marriott International.

“For all the naysayers in terms of what we have done and continue to do, please join me in welcoming Marriott to the shore of St. Vincent and the Grenadines,” Beache said.

He said that “amazingly enough”, since AIA was opened two years ago, the attention being paid to SVG is undeniable.

“Many a time before that airport opened, … we had to work hard to get investors to actually meet with us, potential investors, because why are you going to open a 250-room hotel if there is no way to get potential victors here?”

He said that the opening of AIA had made a huge difference “in terms of how we approach these meetings.

“A lot of times now, the investors are looking for us now…”

Almost three years after AIA opened, Beache said one of the issues he has had is convincing an airline to fly from the United Kingdom to SVG.

“And it is not easy. But in this day and age of social media where we have so many experts who know everything about absolutely nothing, it is amazing to see what is being said and to a certain extent — let me not say a certain extent, I am not happy that it is taking place but at least it is giving people an understanding of what negotiations with airlines are like,” said Beache, who admitted years ago that he learnt a lot about negotiations by trying to attract carriers to SVG.

He noted that Virgin would no longer service St. Lucia from next year, adding that one of the reasons for that is that the airline is asking for US$20 million over three years, which is not a revenue guarantee.

“I am not going to go into details of what my discussion with Virgin or BA have been like, but that should give you an idea of what is expected.”

He said that SVG’s contracts with American Airlines, Air Canada and CAL are based on revenue.

“What they are asking for is nothing based on revenue. It is a flat-out payment to the airline and no matter what the airline is, that has to be paid. So it gives you an idea of what is [being] looked for,” he said of the UK carriers.

“But with a hotel like Marriott coming on stream, it helps us because one of the issues that has been occurring in our negotiations has been our room stock,” Beache said.

He said that while the Vincentian diaspora is important, in negotiations, airlines are more concerned about the leisure traveller “because it is not only about selling seats.

“It is about filling up the rooms. Because airlines are not just about airline industry, they are involved in the tour operator industry. And so, sell the seats, sell the hotel rooms, sell the rental cars, all of that is what the airlines are about,” Beache said.

“So having a strong name like Marriot come on board makes my job, I am not going to say a lot easier, a bit easier. And as we continue to push to try and see if we get those direct flights out of the UK, it is a big feather in my cap that I can now say Marriott is now coming on stream with 250 rooms.”