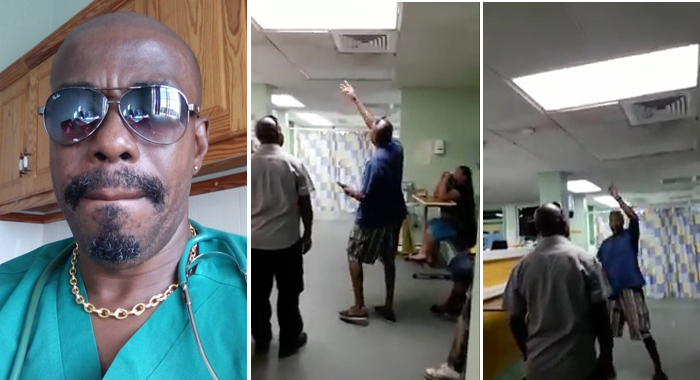 The state-employed doctor who was filmed decrying the conditions at the Accident and Emergency Department of Milton Cato Memorial Hospital says his conduct was not unprofessional.

“So me seeing it and commenting to a colleague, how can that be unprofessional? You can’t call people unprofessional because it offends somebody…” Michael Goodluck, who has been a district medical officer since 2003, told iWitness News on Tuesday.

In the video, which was filmed last Friday, Goodluck is seen pointing out to hospital maintenance department employee Elroy Boucher what is said to be mould in the roof of the emergency room.

Boucher is also president of the Public Service Union and Goodluck said the union boss happened to be there at the time.

“Why every time society speaks out about the ills and wrongs you are unprofessional or you hate someone or your intentions are not exactly admirable,” Goodluck told iWitness News.

“It is sad. It is very, very sad. What is the sense you are telling somebody you are right in what you are saying but you shouldn’t say it. That is not consistent with common sense and logic,” he said.

“And hear what they calling it, ‘ranting’,” he said, referring to a media report on the development.

“Tell them to look up the definition of ranting. I was not loud and making aggressive stupid remarks. I was having a calm conversation albeit it was very disturbing to me and to anyone who concerned about healthcare and wellbeing of their fellowman,” said Goodluck, who also outlined the dangers of being in a mould-infested room, said

Goodluck said he was at the department to perform a surgical procedure on a child and was told that there was no plaster at the Accident and Emergency Department where the procedure was done.

This, he said, was “appalling”.

“Every time you say something, they are telling you that your intention was not what it appears. I am a genuine person. This is not about politics. I have no interest for no minister or so forth. I can only work with what they are presented with,” said Goodluck who has been employed by the state since 1999, after being trained in England.

“It is real sad. I ain’t no just come. I am a Vincentian doctor and I care about my community, I care about my people and I want to see optimal health care. I don’t like it when people die when they ought not to,” he said.

15 replies on “Nothing unprofessional about my comment — Dr. Goodluck”