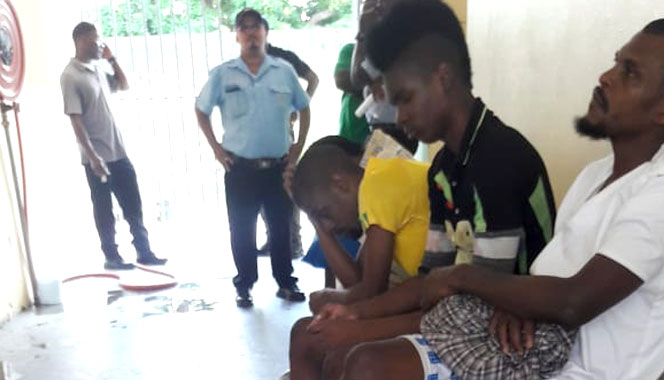 The prisoners — in the foreground — and other persons at the Mental Health Centre on Thursday.

There was anxiety among staff at the Mental Health Centre (MHC) in Glen, on Thursday, as three accused murderers, who were previously being held in prison, were transferred to the psychiatric hospital.

The accused murderers, along with another prisoner, were transferred to the psychiatric hospital in keeping with a court order.

However, Superintendent of Prisons, Brenton Charles, told iWitness News on Thursday  that the Prisons had agreed to withdraw the transfer until the Ministry of Health put the requisite systems in Place.

“…they are trying to but the requisite things [are not] in place out there and I agreed with him (the permanent secretary in the Ministry of Health) to withdraw the prisoners until they have things properly organised there, and then we can take them back. I think it is the only wise thing to do,” Charles told iWitness News.

A member of staff at MHC, who asked not to be named in this article, told iWitness News that members of staff were anxious about their safety and security in light of the crimes that the men are accused of committing.

Joseph, 20, of Belmont is awaiting trial in connection with the May 2, 2016 murder of Police Constable Giovanni Charles of New Montrose, who died after being stabbed at the Belmont Government School.

Johnson, 29, is charged with the May 1, 2014 murder of his father, Calvin Jacobs, a 56-year-old mason, also of Biabou. On May 2, 2014, Jacobs’ body was discovered in a shallow grave in the yard of the wooden house in which he and his son lived at Biabou.

In April, the Mental Health Centre concluded that Kesean Cain, 19, of Diamond Village, is not fit to stand trial on the murder for which he is charged.

Prosecutors say Cain is the man caught on camera in Kingstown, stabbing Brenda Layne, a 48-year-old security guard, of Chauncey and Rillan Hill, resulting in her death in August 2018.

Carson Small, who is said to be charged with burglary, was also transferred to the MHC.

The MHC source told iWitness News that the hospital, which has 196 male patients, is overcrowded and understaffed.

“We are extremely overcrowded, we cannot handle these prisoners … We are a hospital, not a prison,” the staff member told iWitness News.

The health care provider said there are two staff nurses, one nursing assistant, and three nursing aides attending to the 196 male patients at MHC.

The international standard is one nurse to 10-11 patients.

In terms of security, there is an unarmed security guard from a local firm stationed at the main gate the hospital, and there an inner gate where a male attendant is stationed if patients are in the courtyard.

On the night shift on the male ward, there is one staff nurse, one nursing assistant and two nursing aides on the ward with 196 male patients.

The female ward has 45-50 patients with one staff nurse, one nursing assistant and one nursing aide during the night,” the source said.

Meanwhile Charles told iWitness News that his officer simply complied with the order of the court when it made the transfer of persons from the prisons to MHC.

He said that with the persons transferred, the MHC is responsible for them, including for security issues relating to their relocation there.