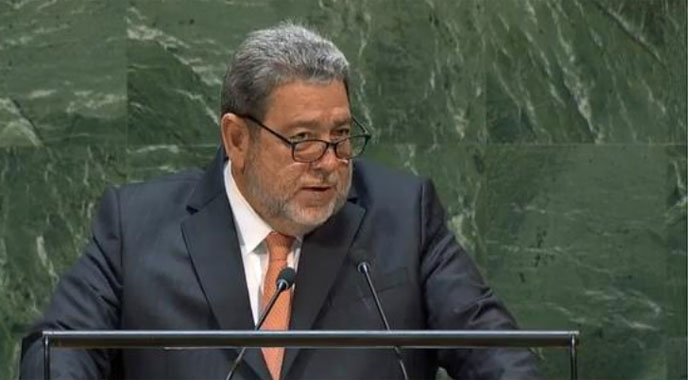 Prime Minister Ralph Gonsalves has urged the United Nations to stand resolutely against the “thinly-veiled war” being waged against small island developing states (SIDS) “under the guise of combatting tax secrecy and reducing ‘illicit financial flows’”.

“The constant bullying by ruffians, the bureaucrats of the European Union, in particular, has revealed that the unambiguous objective of the EU is not well-regulated Caribbean financial centres, but a decimated and discredited sector, while pandering to the thriving centres that exist within EU borders, or in other, more powerful locales,” Gonsalves told the UN General Assembly last Friday.

Last year, lawmakers in Kingstown were summoned two days before Christmas to change the law to avoid EU sanctions.

The changes to the International Business Companies Act, ahead of an EU review in February, which could have seen St. Vincent and the Grenadines (SVG) blacklisted for non-compliance.

And even as Kingstown attempted to comply with the EU requirements by passing the law, Gonsalves had called for creative resistance to the EU on this and other matters, which he said are not in the interest of Caribbean and other small states.

Gonsalves spoke to the issue against at the UN last week, saying:

“The war being waged on legitimate commercial activity in the Caribbean by the European Union traffics in outmoded stereotypes and is accompanied by the unmistakeable whiff of a paternalistic bias that romanticizes the Caribbean servant or subsistence labourer, but instinctively rejects the concept of a Caribbean banker.

“It is self-evident that opaque, non-inclusive, undemocratic entities are presuming to impose an illegitimate rule-making authority on island states in the hope that our financial sector collapses under the weight of onerous regulation, rapidly changing requirements and the threat of unilateral blacklists,” the prime minister said.

He said that St. Vincent and the Grenadines “is under no illusions: our financial services sector, and those of our Caribbean brothers, is experiencing a synchronised political assault, masquerading as an objective bureaucratic regulatory exercise.”

Gonsalves also used the speech to address the issue of de-risking — the threat by banks in developed countries to withdraw correspondent banking services to the region.

Caribbean countries have been arguing that de-risking would exclude the region from the global finance and trading system with grave consequences for maintenance of financial stability, economic growth, remittance flows and poverty alleviation.

Gonsalves told the general assembly that SVG wished to formally place the issues of de-risking and loss of correspondent banking relations finally on the agenda of the General Assembly and the Economic and Social Council.

“Well-meaning, but ill-fitting regulatory attempts to combat terrorism and money laundering have had the unintended effect of making it prohibitively expensive for banks to operate in small island locales,” the prime minister said.

He said the flight of these banks, and the withdrawal of relationships with other financial institutions, threatens to disconnect island states from international trade and commerce, with disastrous developmental consequences.

He said that some of SVG’s allies, such as Taiwan, “have been exemplary in offering their perspectives and support to our developmental aspirations, and have proven time and again to be more than deserving of a meaningful role in the specialised agencies and bodies of the United Nations.

“Indeed, more and more South-South cooperation is moving from the periphery to the centre-stage of the global political economy to the benefit of SIDS like Saint Vincent and the Grenadines,” the prime minister said.