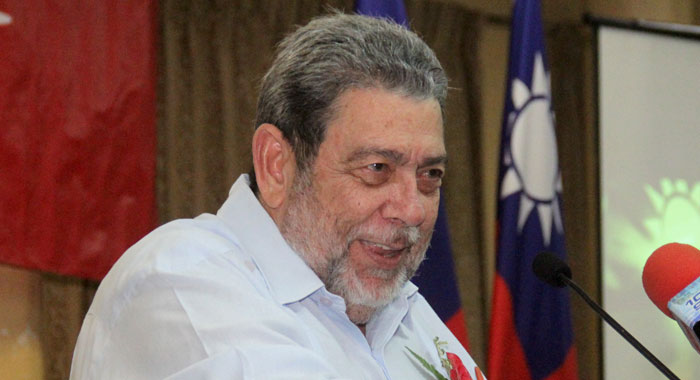 The NDP, under the leadership of Arnhim Eustace, announced in August 2016, that if voted into office, it would switch diplomatic recognition to China.

Godwin Friday, who, in 2017, succeeded Eustace as NDP president and Opposition Leader, has repeatedly reaffirmed his party’s commitment to ending diplomatic recognition of Taiwan establishing relations with China.

Speaking in Kingstown, on Tuesday, at an event to mark Taiwan’s 108th National Day, celebrated on Oct. 10, Gonsalves noted that for the past 38 years, successive governments in St. Vincent and the Grenadines (SVG) have had very close relations with Taiwan.

Gonsalves said that the NDP’s position is “unfortunate”.

“It is not too late for them to change their minds and I am urging them so to do,” he said at the event, which was attended by NDP founder and former Prime Minister Sir James Mitchell, and Member of Parliament for Central Kingstown, St. Clair Leacock, an NDP vice-president.

The NDP has said that it will respect and pay courtesy to Taiwan’s diplomatic functions in SVG while the diplomatic relations obtain.

Gonsalves said SVG has relationship with China through a number of institutions, such as the Caribbean Development Bank, the World Bank, the International Monetary Fund and the United Nations.

He noted that Taipei, Beijing and Kingstown are members of the World Trade Organisation.

“We have nothing against the citizens of Mainland China,” Gonsalves said, adding,

“They come here and they establish business and they get work permits, not from my time but from the time of Sir James.

“So it is not that there is no connection, but the fact is this: the global international architecture has evolved where the people’s republic of China says it is one-China policy and you have relations with them only.”

He said SVG has had greater benefit from its relationship with Taiwan.

“And we do not see the necessity or the desirability of changing those relations. We are not inconstant in our friendships and we can be counted as reliable people. That is how we are. That is how our Caribbean civilisation has evolved in the space called St. Vincent and the Grenadines.”

The prime minister said nations must work together on the big problems affecting the world, including climate change, artificial intelligence, the growing gap between the rich and the poor globally, the scarcity of certain strategic resources, war and peace.

“Every single one of these things, the issue of air and sea transportation and disease, all of them, you need everybody to work together. We will be burying our hands in the sand to say we must ignore them. Well, St. Vincent and the Grenadines is not ignoring Taiwan.

“Why do we want to interfere with an issue where common sense tells us that we should try to work together and respect everybody? And we won our seat on the Security Council by a simple tagline: Friends of all, striving for a better world. And that is peace security and prosperity…

“So when you see people depart from such common sense positions, you always ask yourself if there is something inside the mortar besides the pestle,” he said, adding that Kingstown-Taipei ties will be campaign issue during the next general elections.

“So I come here, as the prime minister to reaffirm our friendship.”

Gonsalves noted that he, Sir James Mitchel, and Robert Milton Cato have been prime minister except for five months of the 40 years of SVG independence, adding that he and Sir James, the surviving prime ministers, agree on SVG-Taiwan ties.

“… and you want to substitute your judgement for ours, you can do so, because that will be your right. But I am advising you that it will be dangerous, reckless, irresponsible to ignore such sage – such wide advice of Cato, Mitchell and Ralph.”

He noted the assistance that Taiwan has given SVG in the area of infrastructural development, agriculture, and education.

“What are we going to do? You’re gonna break relations with Taiwan. What about the 60 or 70 or 80 students who are over there? You going send them to Beijing? You going disturb them? I am not saying no nobody must go and study in Beijing; it is a tremendous civilisation, the Chinese, of which Taiwan is part…

“All those are questions which sensible people have to answer,” Gonsalves said.