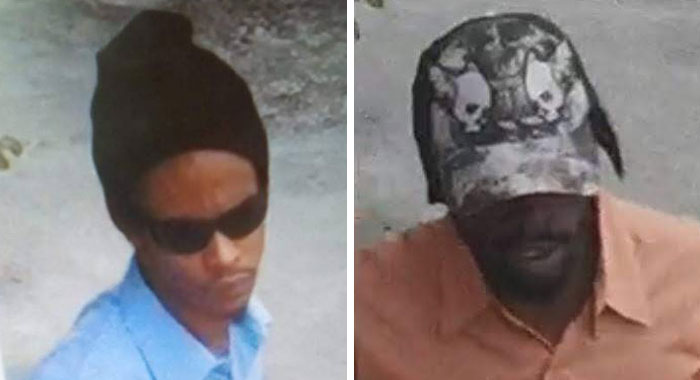 Police in Grenada had released these photos of the alleged robbers.

Two Vincentians men have been arrested in connection with the Oct. 11 robbery of a credit union in Carriacou, a southern Grenadine island that forms part of the state of Grenada.

The men were arrested in St. Vincent and the Grenadines Friday morning, a well-placed source told iWitness News on Saturday, but declined to comment further about the circumstances surrounding the arrest.

The men’s identities have not been released and police are yet to comment publicly on the arrest.

However, a law-enforcement source told iWitness News that investigators from Grenada are expected to arrive in SVG soon as their investigation continues.

Police in Grenada had issued a wanted bulletin for the men and had notified regional and international law enforcement agencies of their alleged crime.

The men are alleged to have robbed the Carriacou branch of the Grenada Union of Teachers Credit Union of an undisclosed sum of money around 8:30 a.m. on Oct. 11.

The credit union commented on the robbery, saying on its website saying:

“Earlier today an incident occurred at our Carriacou branch which involved a security breach by two individuals. An extensive investigation is underway, and the GUT Credit Union is working closely with the Royal Grenada Police Force to resolve the matter.”