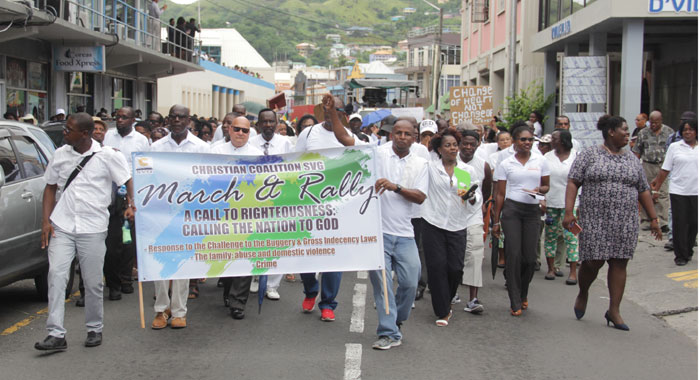 Members of the Christian community march in Kingstown on Thursday in support of the nation’s buggery and gross indecency laws. (iWN photo)

Lawyer Jomo Thomas says it is “unfortunate” that Prime Minister Ralph Gonsalves has invited the churches get involved in the legal challenge to the country’s buggery and gross indecency laws.

Ten churches, calling themselves the Christian coalition, have asked the court to allow them to join the government in resisting the legal challenge. The court will hand down its decision on Wednesday.

However, one cleric, Anglican Bishop C. Leopold Friday had lobbed the issue back at the prime minister, saying it was a question for the state.

In doing so, Friday quoted the position of the Anglican Church, elaborated in 2015, that while rejecting homosexual practice as “incompatible with Scripture”, the Anglican communion “calls on all our people to minister pastorally and sensitively to all irrespective of sexual orientation and to condemn irrational fear of homosexuals, violence within marriage and any trivialisation and commercialisation of sex”.

In the same resolution, the Anglican Church said it “recognises that there are among us persons who experience themselves as having a homosexual orientation.

“Many of these are members of the Church and are seeking the pastoral care, moral direction of the Church, and God’s transforming power for the living of their lives and the ordering of relationships.

“We commit ourselves to listen to the experience of homosexual persons and we wish to assure them that they are loved by God and that all baptised, believing and faithful persons, regardless of sexual orientation, are full members of the Body of Christ”.

And, in September, Gonsalves, who is also Minister of Legal Affairs, noted that the nation’s buggery and indecency laws date back to its colonial past.

Gonsalves said that some persons have suggested that his government could deflect the legal challenge by amending the laws to decriminalise same-sex activity among consenting adults in private.

He said others have suggested that the government leave the law as is and allow the court to pronounce on them.

“But, like everybody else, I would await the judgement of the court,”

Gonsalves, however, said that the church and civil society organisations in SVG were welcome to join the government as it responds to a challenge to the nation’s anti-same-sex laws.

“One of the things that I thought was unfortunate from the get-go is where the prime minister of St. Vincent and the Grenadines told the churches that they should consider getting involved in the cases. I think that was an unfortunate thing.

“Based on the state of the law, maybe it was an astute gesture because this case was brought against the government of St. Vincent and the Grenadines.”

With the legal challenge coming one year before general elections are expected, there could be some political fallout if the court overturns the nation’s buggery and gross indecency laws, as it has done in other Caribbean jurisdictions.

Thomas noted that in recent years, Gonsalves had called on the church to lead the debate and Bishop Friday had lobbed it back and said that the government should do so.

“And then when this case was brought, the prime minister, at a press conference, said the church should be involved.”

Thomas said churches get involved in these cases all over the world, adding that was the case in Belize, Jamaica and Trinidad.

He, however, noted that the matter before the court is a constitutional challenge, noting that in deciding matters, all courts consider issues of morality.

“… but in all the cases he has read, the courts have said that the states are secular societies and therefore, the deciding the case on issues such as the supremacy of God and morality are not germane to deciding constitutional provisions,” Thomas said.