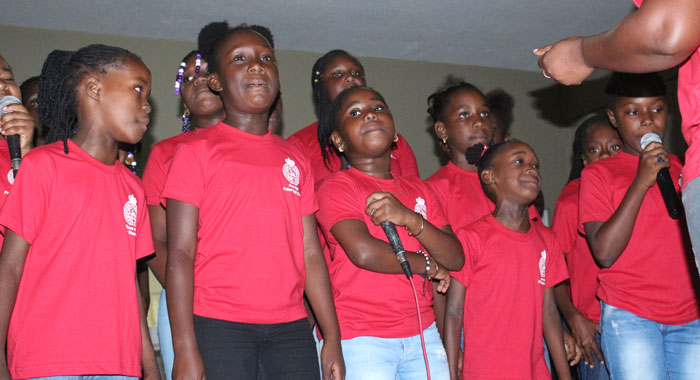 Uniformly dressed in their colourful white pants, red shirts, white sneakers, red and white socks and red and white baseball caps, Traffic Angels thrill the audience, first with their traditional song, “Joy To The World” followed by their original song, “A Joyous Season”.

The keenly contested competition saw all of the choirs doing good renditions. But in the opinion of the three independent judges, Traffic Angels’ performances were superior.

Second place went to Central Carollers, who sang “When A Child Is Born” and “Christmas On The Beat” while the third position went to the 2018 champions, Fire Busters.

For placing first, the Traffic Angels received a cash prize of EC$500, courtesy the PCCU, the champion trophy compliments SCS and one case of drinks compliments Vita Malt. They also received four additional trophies for winning the other categories.

They receive a cash prize of EC$300, a trophy and one case of drinks. Chapmans Police Youth Club placed second, with Vermont Youth Club taking the third position.

Sixteen choirs participated in this year’s carolling contest; eight in the senior’s and eight in the junior’s category.

Commissioner of Police, Colin John and Vice President of the Board of Directors of the PCCU, Station Sergeant Brenton Smith delivered brief remarks.  The 2019 carolling contest was held under the theme “A joyous evening of carolling and entertainment

Meanwhile, on Saturday, the Traffic Angels continued their winning ways, defeating seven other choirs at the Ministry of Transport and Works Social Club Christmas carolling contest.

One reply on “2 new champs in Police Carolling Contest”