‘I am not opposed to police’ — Jomo 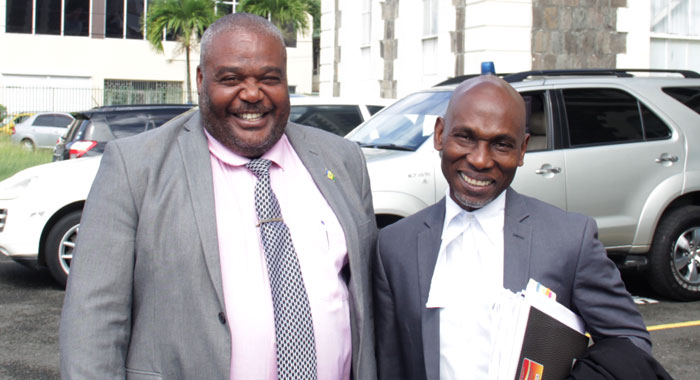 Defence counsel Jomo Thomas, right, shares a light moment with detective Assistant Superintendent of Police Trevor Bailey after Friday’s sitting of the High Court. Bailey was the lead investigator into the Aug. 14, 2011murder of Stephanie Daniel, and attempted murder of Vasilsa Maloney, both of Greiggs. Thomas’ client, Aubrey Wilson was on Friday sentenced to a total of 38 years in jail for those crimes. (iWN photo)

Defence counsel Jomo Thomas said that while many police officers think he is opposed to them,

“I am not opposed to the police at all.”

He told the closing of the criminal assizes on Friday that just as High Court judge, Justice Brian Cottle, had said at the event there are good police officers and bad ones.

Thomas was the only defence counsel at the bar at the closing and hence spoke on behalf of the private bar.

He said that when he makes an adverse comment about a particular police activity, “I may do that because I think it reflects police overreach but, certainly we can only imagine what kind of society we would have, if we don’t have police presence and police protection.

“And truly, all we can do is no less than to tell the police officers and to tell the police establishment that we recognise and respect their duty and we hope that you would do even more to protect and serve all citizens of St. Vincent and the Grenadines,” the lawyer told the court.

Thomas was the lawyer for then 16-year-old Jemark “Parch Nuts” Jackson, who three police officers — Hadley Ballantyne, Kasankie Quow and Osrick James — beat into a coma on Nov. 18, 2008, at the Criminal Investigations Department.

The officers were convicted of assaulting the teen and were each fined EC$1,500 to be paid in one month or spend six months in jail.

They each paid the fine and then Commissioner of Police Keith Miller reinstated them to their jobs.

Thomas, who is also an activist and Speaker of the House of Assembly, has, before his appointment to the national assembly, joined the picket line in demonstration against police excesses and has consistently spoken out against police overreach.