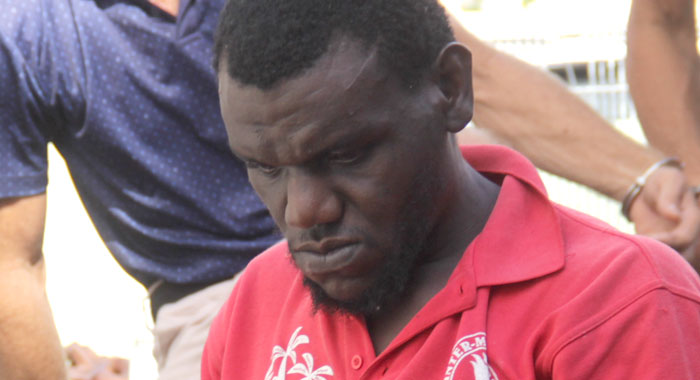 A South Rivers man who was placed on an EC$1,500 bond two weeks earlier, had to come up with EC$2,736 immediately on Monday to avoid jail time.

Jamel Miller, 31, who is also from Kingstown, found himself in the legal predicament having smashed a car window and stolen two bottles of incense oil and EC$16 in cash inside.

On Monday, at the Serious Offences Court, in Kingstown, Jamel Miller, pleaded guilty to a charge that on Dec. 19, at Cane Garden, without lawful excuse, he damaged the right front door glass of motor vehicle PD 570, value EC$1,200, the property of Kenroy Matthias of Cane Garden.

The man, who also offers Kingstown as his address, further pleaded guilty to a charge that on the same date and place, he stole two bottles of incense oil, valued at EC$20 and EC$16 in cash, Matthias’ property.

The facts of the case are that on the date in question, Matthias, the owner of PD 570, a grey Honda car, parked and secured the vehicle outside his gate in Cane Garden about 6:30 p.m.

About 11:20 p.m. Matthias heard a noise outside of the house and saw Miller entering the vehicle.

Matthias alerted a neighbour and the police. The two civilians apprehended Miller and kept him in their custody, later handing him over to the police officers who responded to the call.

The police found the two bottles of incense oil and EC$16 in coin on Miller’s person.

The officers found a large stone inside the car and noticed that the right front door glass had been smashed.

When cautioned, Miller told Police, “Officer, I get the stone and smash the glass.”

She further noted that just two weeks earlier she had placed him on a bond, and recalled that he had said that his mother had been ill.

“Did she get better?” Browne asked Miller, who responded in the affirmative.

The chief magistrate ordered Miller to compensate Matthias forthwith in the sum of EC$1,200 or spend four months in jail for the damage to the car window.

She also ordered him to compensate Matthias in the sum of EC$36 for the stolen items and cash or spend two weeks in jail.

Those sentences will run concurrently.

Further the bond was activated, and Miller was ordered to pay the court a further EC$1,500 forthwith or spend six months in prison.

However, that sentence will run consecutively to the other two.