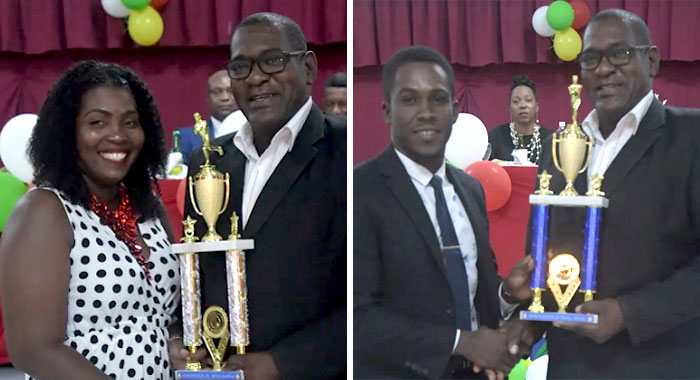 Corporal of Police 108 Sylvorne Oliver has been adjudged Police Sportswoman of the Year, while Constable 857 Desron Maloney has been awarded the Sportsman of the Year prize.

A citation at the annual police awards dinner on Dec. 28, said that Oliver has gone “above and beyond the call of duty to ensure that the organization’s efforts through sports are realised”.

As the captain of the Police One netball team, Oliver led her team to third place in the Industrial/Firms Netball Tournament.

Her talent in the defence has been remarkable throughout the year and has proven to be an asset to the team, through her ability to intercept and create overturns, the citation said.

“Even with an injury, she never wavers in her duty to turn up for matches, and in playing different positions on the court when she is needed to.

“Though this officer’s performance on the court is outstanding, her actions off the court are even more so, as described by her coach. Her innovation and contribution to the netball team’s fundraising activities are indeed commendable and have separated her from the other nominees for Sports Woman of the year.”

Meanwhile, the citation said that, as a cricketer, Maloney has cemented himself as “a consistent right hand batsman that has no problem scoring runs off the best bowlers in the country”.

His performance led to him being selected to represent the country in the 2019 Windward Islands Male Cricket Tournament, where St. Vincent and the Grenadines placed second to tournament winner, Grenada.

Maloney recorded an average of 57 and scored 171 runs in three matches.

“This incredible performance did not go unnoticed, as he was then selected to represent the Windward Islands in the Regional Super50 tournament in November of this year.

“Maloney made a significant contribution to his team, averaging 27.57, and scoring 193 runs in seven (matches including batting his way to 50 against cricketing giants, Trinidad and Tobago.

“His performance led to him being described by ESPN sports as a ‘dynamic batsman’, giving him an edge over the other nominees for this year’s Sportsman of the Year,” the citation said.

Officers’ involvement in sports is part of the  Royal St. Vincent and the Grenadines Police Force’s community policing.

The force said sports has always been a vehicle that affords the organization an opportunity to bridge the gap on communication between the public and the police.