ULP the ‘most successful govt’ in SVG — Gonsalves 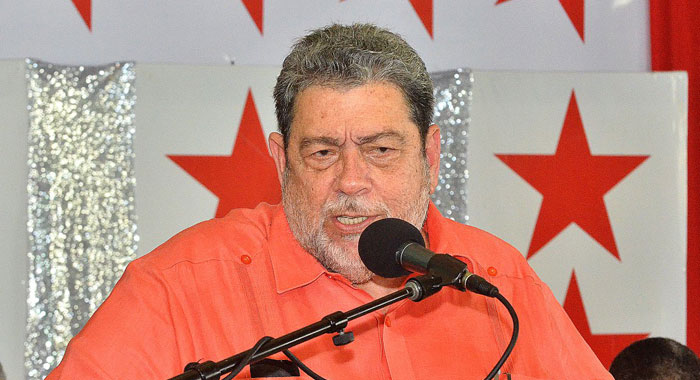 The ruling Unity Labour party is the most successful in the history of St. Vincent and the Grenadines, party leader Prime Minister Ralph Gonsalves told its annual convention on Monday.

“And the entire country knows and the world knows that the most successful government that this country had even seen is the government of the Unity Labour Party from 2001 to the present time,” Gonsalves said.

He said that in March this year, the government will celebrate 19 consecutive years in office.

“Currently, no political party in this country, or in the hemisphere, that we have seen, has won consecutive elections for 19 years.  Not one other country in CARICOM can boast that.”

Gonsalves might have forgotten that Denzel Douglas and his St. Kitts Labour party were in office for 20 years before it was booted out of office in 2015.

But he was quick to say that opposition lawmaker and Vice-President of the New Democratic Party, St. Clair Leacock was right in the comment he made in a recording, from radio that was played at the convention.

In the recording, Leacock had urged NDP supporters not to be dismissive of Gonsalves, his leadership style, contacts, and strategies.

“So St. Clair Leacock is right. Labour ain’t easy to beat. And our roots are deep, our connections with each other are well-founded, very strong and we have the leadership, we have the policies and the programmes, we have the candidates, we have the personnel, we have the organisation and we have the rank and file base which knows completely, entirely, that this government, whatever its limitation –because we are human beings — works hard and smart and openly in the interest of the people of St. Vincent and the Grenadines.:

He further said that the ULP is united.

He said the party has one leader, is agreed on one set of policies and programmes, “and we all working together, rank and file and leadership, together, in the interest of this country”.

The prime minister said that in the 19 years of the ULP in government, he has never had reason to dismiss anyone from the Cabinet.

“I have never had, on one single occasion, a Cabinet member resigning from the government because they have differences with the government. They ain’t resign at all,” he said.

He then listed a number of things, which he said are incontrovertible.

The prime minister said that far more people are working today in SVG than in 2001, when his government came to office, adding that Vincentians are far better off; there is far less poverty and indigence, far less undernourishment.

Gonsalves said there is a stable monetary and financial system and low inflation; far better and deeper regional integration, foreign policy and diplomatic representation overseas; and far better life and living in every demographic.

“In fact, over the last 19 years, a socio-economic revolution has taken place in St. Vincent and the Grenadines by way of the parliamentary process,” he said, adding that this process was a “difficult and messy” one through which to effect change.

“But we have effected the change,” he said, adding, “Fundamentally, when we arrived in office, St. Vincent and the Grenadines was at a dead end in economic terms…

“This economy grew, in the aggregate, from $800 million in 2001 to 2.2 billion last year,” the prime minister told party supporters.

20 replies on “ULP the ‘most successful govt’ in SVG — Gonsalves”