Resort to have 15 luxury residence homes, two penthouses, and 18 apartments 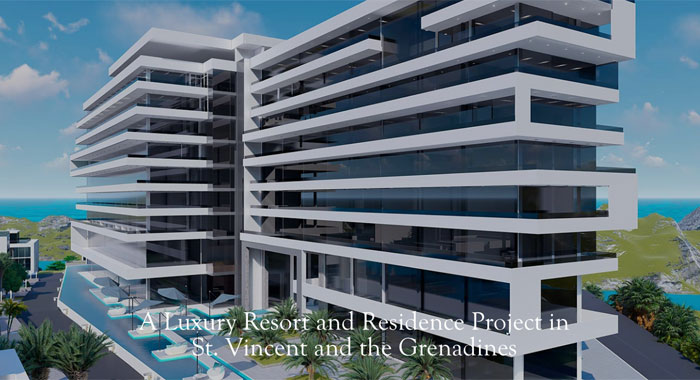 An artist impression of the hotel tower block.

Prime Minister Ralph Gonsalves and Alex Lodde, co-founder of A&A Capital Inc., a private equity firm, on Tuesday, turned the sod to mark the official beginning of construction of the US$60 million Royal Mill Resort and Residences.

The facility, located in Ratho Mill, will have 80 luxury hotel rooms in a 12-storey building, which will be the nation’s tallest.

It will also have 15 luxury residence homes, two penthouses, and 18 apartments, along with luxury shops, a business centre, conference/meeting centre, a large gym and other ancillary facilities, according to the company’s website.

Construction is expected to be completed by the end of this year, the website says.

In terse remarks at the ceremony at the construction site in Ratho Mill, Lodde thanked the prime minister for the opportunity to invest in St. Vincent and said that his company will not disappoint.

“…I think this is just a great opportunity to create jobs, to create ancillary businesses, to do a great job and put our big star on the map,” Lodde said.

Delivering remarks during the ceremony, Minister of Finance and Parliamentary Representative for East St. George, Camillo Gonsalves, said the project “is the most ambitious hospitality construction project anywhere on mainland St. Vincent at the moment”.

He mentioned some of the project’s features, including the 12-storey hotel tower.

“And you can imagine it, looking up on the hill coming from Calliaqua and coming from Biabou, driving around the corner and seeing this towering, gleaming white structure on a hill overlooking all of this wonderful landscape.”

The minister said Royal Mill will be of a style of architecture that exists nowhere else in the country and will employ over 200 Vincentians during the construction phase and a similar number on completion.

He said that five years ago, he had said that East St. George and Calliaqua and its environs would become a hub for tourism in SVG, and one of the best  in which to live, work, and socialise, not only in the country but also in the Caribbean.

It started with a number of small steps, Gonsalves said, noting that the government cleaned up the ships’ graveyard on Canash Bay.

“And it certainly wouldn’t be a particularly good view on this hill of the Royal Mill hotel if the hotel guests and millionaire investors looked out their window and saw a graveyard for ships.”

Gonsalves said that the government cleaned up the area, buying into businessman Kelly Glass’ vision for Canash Bay to be a “centre for yacht tourism in the southern Caribbean.

“And all of a sudden, this location because that much more attractive,” he said of the site where Royal Mill will be built.

He said that the government has said it would attract businesses to the area through attractive concessions and selling the natural advantage of East St. George – “its location, its intelligent and hard-working people and its natural assets”.

Gonsalves said that businesses began to arrive, saying that first among them was the One St. Vincent Group — which moved from Fountain to Glen.

He mentioned Rainforest Seafoods, which will establish a seafood plant in Calliaqua.

“And then we heard that this particular piece of land was going on sale,” he said, noting that the land was privately owned and that A&A Capital is also a private institution.

“The government had nothing to do with their interest in the land or their purchase of the land. It was a private entity buying from another private entity but we are thrilled that the people who bought it had plans to develop it into a major hub for tourism, for employment in the constituency and in St. Vincent and the Grenadines.”

The company has already imported millions of dollars in equipment and material to begin construction, Gonsalves said, adding that the timeline for construction is “very ambitious”.

“And I am a big fan of ambitious timelines and ambitious investors,” he said, adding that to achieve that timeline in a community setting where they would have to be sensitive to residents, would require a lot of manpower and constant supervision by the A&A team.

“We are hopeful that you can meet those deadlines, because after we get the 200 odd people in construction hired, they tell me that 200 odd people will be employed in the hotel itself, in the hospitality services.

“And in that regard, I would like to point out that currently there are 249 young Vincentians getting associate degrees in hospitality, culinary arts, and tourism studies, at the Community College just down the road.”

The minister said the government believes that the investment is a manifestation “of what we are trying to do in the government, not only in East St. George but across the country.