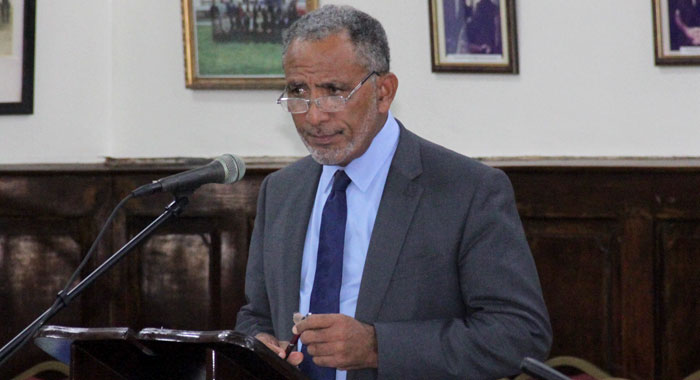 Leader of the Opposition Godwin Friday, on Tuesday, said that while the 2019 budget was “old wine in new bottles”, Minister of Finance Camillo Gonsalves did not bother to change the vessels this year.

“It’s old bottles this time, because there’s a lot of repetition from what was in the last year’s budget — and I didn’t really realise to what extent until I had a look at both of them last night. As you might imagine, I didn’t sleep,” he said as he began the debate on the EC$1.2 million fiscal package.

The budget is the largest ever presented to Parliament but Friday said that is “a big fat lie” because of the heavy capital spending for which the government had budgeted, although the source of revenue had not been identified.

The opposition leader accused the finance minister of making “promise after promise that he knows full well he will not keep”.

He said that the biggest of these promises is that the government would spend EC$311 million on capital projects.

“Even he thought that was reaching a bit far,” Friday said, noting that the minister had spoken about a shortage of skilled personnel and aggregates for construction.

“… but also because they don’t have the money,” Friday said, adding that during the debate of the estimates two weeks ago, he noted a gap of $205 million in capital receipts, which the government calls ‘other receipts’.

The opposition leader said that the finance minister does not know where the money for that shortfall is going to come from.

“So many promises and it seems to me that the minister’s aim is to reinvent St. Vincent and the Grenadines this year — in a single year.

“In other words, what he and his predecessor failed to do in nearly 20 years in government — 20 years in power, some would say 20 long wasted years — and I might agree with that — he is telling us now, Mr. Speaker, and he wants us to believe that he will accomplish this, this year.

“Were it not so serious a matter, Mr. Speaker, it would be funny because I found myself, quite frankly, not being able to resist it. I was chuckling — quietly, of course, to maintain the decorum of the house,” the opposition leader said.

Friday said Gonsalves was obviously throwing a jab at him when the finance minister said in the budget speech that some lawmakers had described the 2019 fiscal package as “old wine in new bottles”.

“The minister boasts of his … billion-dollar budget — Billion Dollar Man $1.2 billion almost — which is over $100, nearly $120 million bigger than last year’s.

So, this is, as I said in the previous debate, is clearly an election budget, but the minister doesn’t care much or at all where the money is coming from.”

Friday said this is clear because the figures in the estimate show that the minister doesn’t know where he’s going to get $205.3 million.

He said that the sum under other receipts is 40.5% of the proposed total of the capital receipts of $506.3 million.

“That’s a big hole. It is bigger than most of the potholes — and some of them I show you a little later on — …  that the Minister of Transport has fixed from time to time.

“You can’t dispute, Mr. Speaker that he doesn’t know where this money’s coming from. It’s simply an indisputable fact. And I wish he would spend time explaining why this is in the budget, why it is presented year after year.”

Friday said that if the minister knew where the funds would come from, he would specify it in the budget.

“You’d be obliged to say that I’m getting the money from here and from there and put it there. Otherwise, it would be more dishonest than the practice that is being carried out here by putting it in as though it’s realisable.

“So we have that as an overall context in which to judge the credibility of the minister when he presented his budget, and when he will come back to wrap up. And the other members on the other side, I’m sure when they all get up to speak, they will present their own ministries, hoping that what is allocated to them in the line items of the estimates will actually come.

“But in a sense, when they get up, they all will be playing musical chairs because somebody is not going to get what they are promised, or more than one of them, perhaps, all of them because they’re not going to be able to have the money to do it,” Friday said.