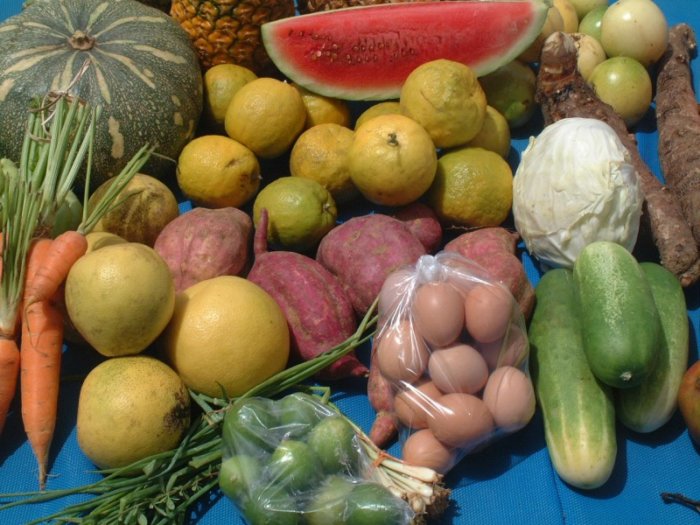 Minister of Finance Camillo Gonsalves says agriculture remains the largest employer of Vincentians and one of the largest direct contributors to the wealth and wellbeing of citizens.

However, opposition spokesperson on the sector, MP for North Leeward, Roland “Patel” Matthews said that the minister’s Budget Address contained only “flowery language” as it relates to agriculture.

In his Budget Address on Feb. 3, Gonsalves said that in 2019, St. Vincent and the Grenadines (SVG) exported more livestock, tonnes of seafood and cocoa than ever before, becoming the first new country of origin for coffee production in more than 50 years.

For the first time in recent history, SVG emerged from the Christmas season without the need to import eggs, he said, adding that with production of 50,000 eggs per day, the country is now poised to export eggs regionally.

Hundreds of local farmers have become licensed as cannabis cultivators, and large swaths of land have been bought or leased for the production of medicinal cannabis,” the finance minister said.

He said that agriculture in SVG is in a period of rapid change and exciting possibilities.

“This reinvigorated sector … is poised to be a dynamic engine for growth and development over the coming decade,” Gonsalves said.

Gonsalves said that the Budget demonstrates the power of our farmers, fisher folk and the agriculture sector.

“Our goal to become the breadbasket of the southern Caribbean is rooted in our faith in the talent of our hardworking Vincentian farmers and fisher folk, and our confidence in the developmental potential of agriculture,” Gonsalves said.

He further stated that with Argyle International Airport in operation, a modern seaport project underway, and a host of public and private sector investments in agricultural production, “the time is ripe for a strengthening and deepening of Agriculture and Fisheries as unshakeable pillars of national growth and development.

“With $45 million of recurrent and capital expenditure invested in the sector, Budget 2020 is a powerful statement of confidence in the transformative power of Vincentian farmers and fisher folk,” Gonsalves said.

But in his contribution to the debate, Matthew ranked the finance minister highly for his oratory skills but gave him a failing grade for practicality.

“Mr. Speaker, the budget, as I said, for oratory skills, I gave the minister nine and a half.  Sounds very good. But with practicality — Mr. Speaker, I must admit there are some things in it, like the PRYME (Promotion of Youth Microenterprises) programme, which is good — I give him four out of 10,” Matthews said.

Matthews acknowledged and applauded the increase in fish landings, adding that fishing has historically been a very important part of the livelihood of the people of North Leeward.

“But, Mr. Speaker, I have heard about renovations of fishing centres and so on,” Matthews said.

He said that in 2001, there was a brand new fisheries centre in Chateaubelair, the only town in his constituency.

“It was left to rot and right now, to repair it might cost more than when it was built,” Matthews said.

He further said that while local fisher folk are, rightly, being praised and urged continue to land millions of dollars’ worth of fish, the government is bringing in large multi-million dollar competitors.

“Mr. Speaker, I am hoping that the multi-million competitor, in the long run, doesn’t make the local fisher folks who are doing so well, based on the minister and observation, take them out of business,” Matthews said.

The opposition lawmaker said he believes that agriculture and fishing are two important industries in which Vincentians can make money, noting that people are becoming more health-conscious about their diet.

“So it’s a niche market that we can develop in St. Vincent and the Grenadines.  But that is the reason why I said if the Minister of Finance believed to his heart the opening remarks he gave under agriculture and fisheries, then we should see more local people given the opportunity, Mr. Speaker, to excel in areas of fishing and agriculture,” Matthews said.

He said that in every budget debate he comes to the conclusion that agriculture “is being treated like a stepchild.

“I used that phrase on many occasions because, in my view, Mr. Speaker, and in the view on this side, more can be done for his vital sector.”

Matthews said that Gonsalves was supporting his position when he said in the budget address that he recognises SVG’s “custody of the region’s most fertile soil, most talented farmers and most able fisher folk”.

He contrasted government investments in agriculture to its input in the tourism sector.

“[The government is spending] millions of dollars to set up a hotel business to give somebody else to manage.  But our own people who are custodians of the most fertile soil is not given a similar opportunity, Mr. Speaker…

“You know our fisher folks are among the best in the region but what have we done for them, bearing in mind that this budget is ‘the best ever’ based on accolades coming from my fellow members on the other side?” Matthews said.

He said that in his very first budget debate in 2011, one of the things he addressed was the need for an agriculture census, as none has been conducted since 2000.

He further noted that no provision for a census exists in the 2020 budget.

“So, you see, bare talks Mr Speaker. We have to put the mechanisms in place to make agriculture a success. And one such mechanism is to carry out an agricultural census. So we know what we have and we could project for the future.

“But without that, we just, we just spinning top in mud as they say or chopping in thin air,” Matthews said.