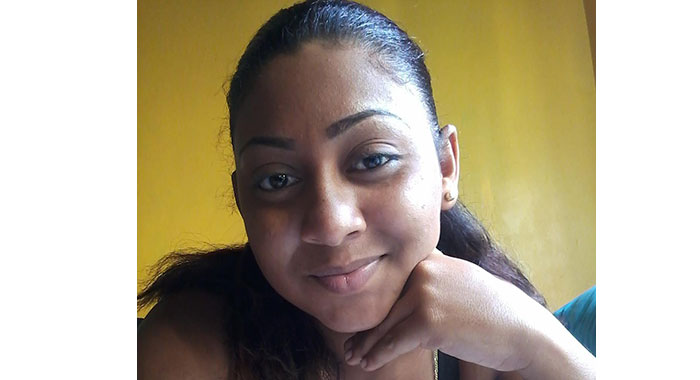 Mickiesha Gumbs, the 26-year-old Park Hill woman, who was stabbed to death on Saturday, allegedly by her boyfriend Vandyke King, 34, of the same address, had repeatedly been a victim of violence at his hand, her older sister, Joseth Gumbs told iWitness News on Monday.

Police, in a statement, on Monday, said that King — an aviation security officer at Argyle International Airport — is alleged to have stabbed Gumbs multiple times in the neck and was in custody, assisting with investigations.

Gumbs died while holding the one-year-old daughter born to she and King.

Her oldest child, a 9-year-old girl from a previous relationship was also present and is said to have witnessed the attack that ended her mother’s life.

The woman was also the mother of a third daughter, who is 8 years old.

Reports are that someone telephoned King while he was at his workplace, telling him that a man had just dropped home his girlfriend.

King is said to have left his workplace and travelled to Park Hill, where he allegedly attacked Mickiesha, ending her life.

Joseth, at times, spoke through tears as she recounted the last moments of her sister’s life and the abuse she had repeatedly endured.

She said that King and Mickiesha were in a relationship for about five years and he repeatedly abused her physically, verbally, and psychologically.

“Is every time our mother send a cell phone for her, he mash it up,” Joseth said.

Asked if she had ever seen King hit Mickiesha, Joseth said, “Yes. I was present many times.”

Joseth said that that she and Mickiesha lived on different floors of their two-storey house, with Mickiesha occupying the upper floor.

She said that while she encouraged her sister to leave her boyfriend and to report his alleged violence to the police, Mickiesha never did so.

iWitness News understands that King was a police officer assigned to the Narcotics Unit but left the force amidst an investigation into some confiscated illicit drugs that had gone missing while in police safekeeping.

“He gave my sister, her daughter and a next girl who we are related to a ride — three of them at the same time.”

She described Mickiesha as “my baby sister, the last of five”.

Joseth said she and King did not have a good relationship.

“He and I weren’t on terms because of his violent acts and the way he come and move with she — push she off, chuck she off, cuss she out loud. He and I had a confrontation years ago. It’s recently we started saying hello to each other.”

Joseth said she had encouraged her sister to leave the man and file a report with the police.

“She always a say if she go a police station wha’ he go do from what he nah go do.”

Joseth told iWitness News that her sister was killed just around the corner from where they live.

She said that Joseth and her 9-year-old daughter returned from Kingstown around 4:30 p.m.

After taking her stuff inside, Mickiesha came back to a patio and was chatting with Joseth and some friends.

Mickiesha was discussing plans for her first daughter’s birthday next Sunday.

“She was saying what she would do and what we would bake and stuff like that.”

Mickiesha then got up and said she was going to King’s house to collect their daughter from King’s mother.

She also took along her 9-year-old daughter and invited a female friend to accompany her.

But about 20 minutes after they left, Joseth would hear the friend who had accompanied her sister, screaming out her (Joseth’s) name.

“I run to the area, when I reach there, I meet my sister just rolling up her eyes, gasping off and her first daughter was lying on her. I try to take the daughter off of her, begging persons to carry her to the doctor and then I blacked out.”

“She witnessed all of it and she (Mickeisha) had her baby daughter in her hand at the same time of the attack.”

Joseth said that persons later told her what had happened.

“When I went around on the block, … somebody was saying that somebody just called the boyfriend at the airport and tell him a man now gone carry home his woman. He then get a ride and left his job and come.”

Regarding the start of the violence, Joseth said that she understands that her sister’s killer tried to take a cutlass from a guy before in the area but the man was able to retain the weapon.

King is alleged to have then run home to his mother’s house.

“Persons all over the place hear the mother bawling for help, trying to hold back the guy and he tear down the mother’s clothes trying to get away from the mother because he went and grabbed two knives.

“My sister was still walking to get home, he ran her down and persons say that he fighting with her with the baby in her hand, kicking her up and she go over the wall into a flowers garden, where the act took place.”

Joseth said she does not know if Mickiesha was stabbed before she fell over the wall.

She said since the incident, none of King’s relatives have reached out to her or her family.

“We haven’t seen any family members or heard anything from them,” Joseth told iWitness News.

Meanwhile, one of King’s co-workers told iWitness News that King turned up for his 1 p.m. to 10 p.m. shift on Saturday.

However, sometime during the shift, he left work without even telling his supervisor.

It was not until some barbequed meals were to be paid for that the staff realised that King was not at work.

Sometime later, news broke that he is alleged to have killed his girlfriend.

The co-worker said they had interacted with King recently and he seemed “depressed and stressed”.

“I asked him if he was OK; he said, ‘Boy, you don’t even know — but we will talk’,” the co-worker told iWitness News