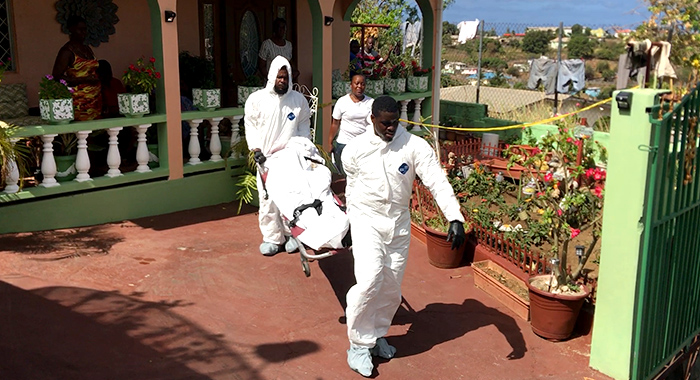 A detective keeps a close eye as funeral home workers remove the body of Moralis Delano Stanley from the house in Chauncey on Tuesday. (iWN photo)

St. Vincent and the Grenadines, on Tuesday, recorded its fourth homicide in four days, with the death of a 17-year-old youth who was shot the previous day.

The death of Juwanie Roberts, of Redemption Sharpes, brought the homicide count to 15 this year, according to police statistics.

Roberts died Tuesday afternoon at the Milton Cato Memorial Hospital (MCMH), where he was receiving medical attention after being shot in Lowmans Leeward, police said.

Roberts, a labourer, had been walking along the Gun Hill public road around 12:45 p.m. Monday when an unknown masked gunman approached him and shot him several times about his body.

His death follows that of Moralis Delano Stanley, a 45-year-old labourer of Chauncey.

Stanley, who is also known as “Rapper” was found dead in a pool of blood at a house where he lived in a compound where his mother’s house is also located.

Police said that Stanley’s mother found him in his bedroom bloody and motionless about 7 a.m. on Teusday and summoned the police.

Police responded and the district medical officer pronounced Stanley dead at the scene.

A senior police officer told iWitness News at the scene that investigators could not determine the nature of the apparent injuries to Stanley’s body because of its bloody condition.

Initial reports were that Stanley was shot, but some residents who claimed to have seen the body said that he had what appeared to be chop wounds.

iWitness News understands that Stanley was last seen alive during the wee hours of Tuesday morning.

Some residents speculated that he might have been killed over pork that was allegedly stolen from residents of Lowmans Hill.

iWitness News understands that Stanley was treated at the Accident and Emergency Department of the Milton Cato Memorial Hospital on Monday for an injury to the head.

The circumstances surrounding that alleged injury are not clear.

The deaths of Roberts and Stanley follow the killing of Lionel “Gobler” George, 28, of Rockies, and his girlfriend, Denesia “Gazaden” Corridon, 23, of Yambou, by unknown assailants in Arnos Vale last Saturday morning.

Investigations into the killings continue.

Police are seeking the assistance of the public in obtaining any information that will lead to the apprehension and prosecution of the offender(s) in these matters. Persons with information are asked to contact the Assistant Commissioner of Police in charge of Crime at 1-784-456-1339 or the officer in charge of the Criminal Investigations Department at 1-784-456-1810 or any police officer or police station they are comfortable with.

Police say all information will be dealt with confidentially.