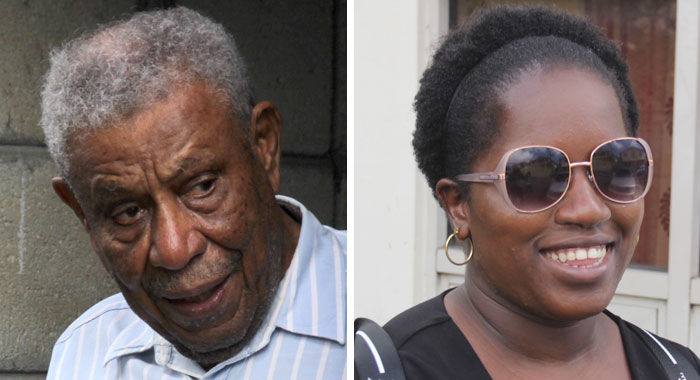 The woman accused of stealing over EC$100,000 from Star Garage, when asked about receipts for blank cheques issued to her, told the company’s secretary, “Mind your business.”

Andrea Peters, the secretary, told the trial of Eunice Dowers at the Serious Offences Court on May 21, that when Dowers refused to submit the receipts, she told Dowers that she would report the matter to Bertille “Silky” Da Silva, the company’s managing director.

In response, Dowers told Peters to “go ahead”.

“Why didn’t you go to the ‘Major’ (Silky) and draw this to his attention that this woman trying to chop down his breadfruit tree?” defence counsel Grant Connell asked Peters during cross examination.

“I did that on many occasions,” the secretary responded.

The trial continues on Wednesday of Dowers, who is alleged to have used over EC$100,000 in Star Garage’s money via fraud, theft, and unlawful use of the credit card assigned to Silky, an 89-year-old businessman.

The Crown is alleging that Dowers, who was born in Nigeria and is Vincentian by marriage, unlawfully used the money when she worked at Star Garage from April 2018 to February 2019, first as Silky’s secretary and then as the company’s Customs broker.

However, the defence is suggesting that Silky authorised Dowers’ use of the money as they were in a relationship, an allegation that Silky has strongly denied.

Peters told the court that she was not aware that Dowers and  Silky were in a relationship.

Earlier, in her evidence-in-chief, Peters said that Silky was not at work when she first raised the issue of the missing vouchers.

She, therefore, reported the matter to the company’s general manager, Joshua Da Silva, who is also Silky’s nephew.

This report brought no resolution to the matter.

But when Peters told Silky that she had not been receiving the receipts from Dowers, Silky asked Dowers why she was not handing them over to Peters.

Dowers told the managing director that Peters was “careless”.

In response, Silky told Dowers to hand over the receipts to Angella Bristol, the company’s account clerk instead.

During cross examination by defence counsel Grant Connell, Peters told the court that she met Dowers as a member of the Star Garage staff after she (Peters) returned from leave.

She was told that Dowers was to be her assistant in the filing department.

However, Dowers later became the company’s customs’ broker and when she was going to clear items at the Customs Department, Peters would issue her a blank check made out to the Accountant General.

Dowers was to fill in the amount and then return the receipt to Peters, which she failed to do on a number of occasions, resulting in the intervention that resulted in the  “mind your business” retort, Peters told the court.

Peters said that if the company had items to clear at the Customs, Silky would instruct her to give a cheque to Dowers, which Dowers would take to his office.

The witness said that sometimes, if she was not busy, she would take the cheque herself.

She said she was not aware of the conversations between Silky and Dowers as they relate to cheques.

Peters further said she was not aware that Silky gave Dowers permission to pay for her personal items using the company’s cheques.

She, however, said that the company would give her a blank cheque made out to the accountant general and Dowers would write in the amount.

Peters said that 99.9% of the time, Silky would ask what the cheque is for and would cross-reference the cheque.
She said that most of the time, before the paper work goes into Silky’s office, the Star Garage knows the amount to be paid to the Customs.

Peters said that if the vouchers are not clipped onto the cheque stubs, it would be said that she was not fulfilling her obligations to Star Garage and could be fired.

The secretary said that Star Garage received the credit card statements almost every month and that she would pass then on to Silky.

Silky would then go through the statement and hand them back to Peters then she would pass them to Bristol.

Peters said she could not recall how often cheques were written for credit card payments.

She, however, said that sometimes, she would be present when Silky go through the credit card statements.

Peters said she can’t recall Silky ever questioning the statement when she was present.

The witness said she does not know of Silky summoning Joshua – who is also authorised to use the credit card — or any other employee regarding activities on the credit card.

She said that most of the time, Bristol would write the cheque for settling the credit card amounts due.