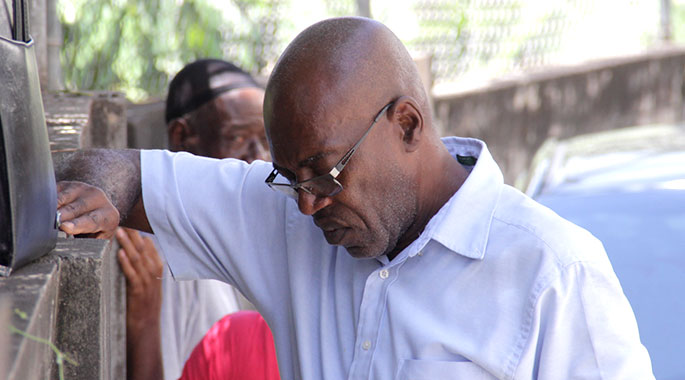 Former Star Garage employee, Marlon Stephenson waits outside the Serious Offences Court on Tuesday for his turn on the stand. (iWN photo)

The man who struck fraud accused Eunice Dowers repeatedly at Star Garage in February 2019 resulting in her quitting the job, told the court this week that he had once begged her not to walk off the job.

Marlon Stephenson, a sales and marketing executive at Star Garage, made the revelation at the Serious Offences Court on Tuesday, when he testified on behalf of the prosecution.

Stephenson, however, laughed heartily when asked if he had written to Dowers after the altercation, as he said the managing Director, Bertille “Silky” Da Silva had asked him to do on a previous occasion, when he had grievances with Dowers.

“An incident like that, the CEO would get involved. The other thing is, the lady never came back to work,” Stephenson said after laughing heartily during cross examination by defence counsel Grant Connell.

“What you found funny? The stabbing or beating a woman?” the lawyer asked Stephenson who has earlier said that Dowers had stabbed him and he defended himself.

Stephenson said that the stabbing was reported to Silky, who did not request that a letter be written.

He further said that he reported the matter to the police.

Stephenson said that the altercation did not take place in the public.

“But Mr. Kenton Chance was present when you were beating the woman,” Connell retorted, referring to executive editor of iWitness News.

“I don’t know about that,” Stephenson responded.

Connell maintained that Chance was at Star Garage at the time of the altercation and Stephenson said that the defence could call the journalist as a witness.

He said he was contemplating taking the matter to court and that the police matter reported in connection with the altercation has not been ventilated in court.

Dowers, a 26-year-old Nigeria-born woman who is Vincentian by marriage, is being tried for fraud, theft, and unlawful use of the credit card assigned to Silky.

She is alleged to have defrauded the company of over EC$100,000 when she worked at Star Garage from April 2018 to February 2019, first as Silky’s secretary and then as the company’s Customs broker.

However, the defence is alleging that Dowers and Silky were involved in an intimate relationship and he authorised her use of the credit card.

Silky had strongly denied the allegation.

In his evidence in chief, led by the prosecutor, Crown Counsel Rose-Ann Richardson, Stephenson said he worked in various capacities at Star Garage and was the sales and marketing representative when Dowers left the company.

Stephenson said that Star Garage has a system that records everything that is in stock, adding that it is “an old system from the 1950s, but still works”.

He said that if something was to be bought online, the purchase is usually done through the Amazon website.

He said he would identify what he wanted to purchase, take a screen shot of it and print and take it to Silky, along with the quantity and price.

Once Silky gives the OK, the purchase is made, the invoice is printed and taken to Silky, who would give it to the administrative secretary for filing.

When the item arrives, it would be cross referenced with the invoice that had been printed earlier.

Stephenson said that the items are paid for using a credit card.

Asked who the credit card belongs, to, Stephenson said: “I think it’s Bertille Da Silva. That’s what I can remember.”

He said he never used the card to buy anything personal for himself or for anybody at Star Garage.

“I know when persons travel on behalf of the garage there is a card given to them but to be honest with you, I have heard of the card but I don’t know which card.”

Stephenson said he remembers an incident with an egglet.

“It is an item that Mr. Silky Da Silva wanted someone to purchase for him. I do recall Mrs. Dowers was asked to purchase that item with, of course, the use of the credit card.”

Besides Stephenson, Angella Bristol, the company’s account clerk was the only other witness to mention an egglet. Bristol told the court that she had seen Silky and Dowers ordering an egglet together.

Stephenson said he had no way of knowing if Dowers was authorised to use the credit card to make personal purchases, but that he had never done so.

He said he had never made purchases of personal household items, phone credit, beauty supplies, or personal electronics with the card.

During cross examination, Connell asked Stephenson why he did not mention the egglet in his statement to the police.

“After giving my statement, on further reflection, I recalled egglets were to be purchased and never arrived in St. Vincent and the Grenadines,” the witness said.

The former Star Garage employee said he sometimes speaks to workers of Star Garage but no longer speaks to Silky or Joshua Da Silva, the company’s general manager, who is Silky’s nephew.

The lawyer asked Stephenson why he was fired, but the court did not allow the question.

‘I was stabbed and defended myself’

“Do you know this young lady over here?” Connell said, referring to Dowers.

“Is that the same one you beat up at Star Garage?” the lawyer asked.

“Your honour, there is a case I am contemplating bringing before you,” Stephenson said.

At this point, the prosecutor rose and objected to the line of question, saying that Stephenson was not on trial.

But Connell argued that the line of questioning was relevant to his client’s case.

In response to the question, Stephenson said: “There is a case where I was stabbed and defended myself.”

Questioned further, Stephenson said that Dowers stabbed him in February 2019.

‘I empathised with her situation’

He said that at a time when he and Dowers worked together, they had a good work relationship.

Asked if he had tried to correct her at any time, Stephenson said he had urged her on one occasion not to quit the job.

“I begged her not to walk off the job before because I empathised with her situation. She was frustrated and packed up her bag and threatened to walk off.”

The lawyer asked Stephenson if he had made certain requests of Dowers and she responded to him using harsh language.

“And as a result of that language, you got angry and beat her,” the lawyer said.

Richardson rose and asked about the relevance of the question.

Connell said it was “to establish a relationship that led to certain things”.

“That is very vague,” the prosecutor said.

The chief magistrate agreed that the defence counsel’s comment was vague and told him that the court wanted him to keep on track with matters pertinent to the charges.

The lawyer changed the area of focus and asked Stephenson if he could recall the number of the credit card that he used to make the purchases.

The witness said he could not recall.

Stephenson said he would also give the documents to Silky, who would, in turn, give them to his personal assistant for filing.

“So you would not be able to verify what purchases you made anytime and using what card?” Connell asked.

Stephenson said that if one shops with Amazon, the credit card number and invoice number would be at the end of the document.

“So it was never my business to remember which credit card,” Stephenson said, adding that if he needed to, he would go back and check the documents.

He said that during their investigations, the police officers had asked him to verify what he had bought using the credit card, but nothing was shown to him.

Stephenson said that while making purchases, he was given the actual credit card and after keying in the numbers he would take the card and documentation to Silky.

Asked if he ever had reason to complain about Dowers, Stephenson said:

“I made my observations and I saw actions that did not fit in the natural realms of business.”

Stephenson said he did not scold Dowers but recommended that Silky write her a letter.

“That meant to write it on his behalf and he would review and sign it,” Stephenson said.

He said he wrote the letter but cannot recall the contents. In response, Connell suggested that no such letter was drafted, but Stephenson maintained that that was the case.

Asked if the letter was ever presented to the police, Stephenson said:

“I was not under investigation. I am not the CEO of the company.”

He further told the court that he did not know if the letters were ever presented to Dowers, adding that they were not carbon copied to him.

Regarding his interaction with Dowers as a Customs broker, Stephenson said that from time to time, if there was anything that he had ordered he would have had to give her the document so that she could made the customs declaration.

Stephenson further said that if the secretary was out and Dowers needed a cheque, he would “see how I can facilitate”.

He said he could not recall that it was a complaint by Dowers that he had “bad work” her by not giving her a document for customs, resulting in her having to make an additional trip to the Customs Department that resulted in the altercation.

“What triggered the altercation?” Connell asked, but the chief magistrate disallowed the question.

Stephenson said it was not true that Dowers had complained to Silky about him.

Asked if it was true that Stephenson, Joshua, Bristol and other employees always had Dowers as a discussion point, “everything she did you complained about”, Stephenson said:

“You complained to Silky Da Silva on several occasions and he did absolutely nothing about it,” Connell told Stephenson.

“Well, I write the letters and gave them to him,” Stephenson responded.

He told the court that there was a complaint at the company that the relevant staff could not get from Dowers the relevant documentation for 10 cheques.