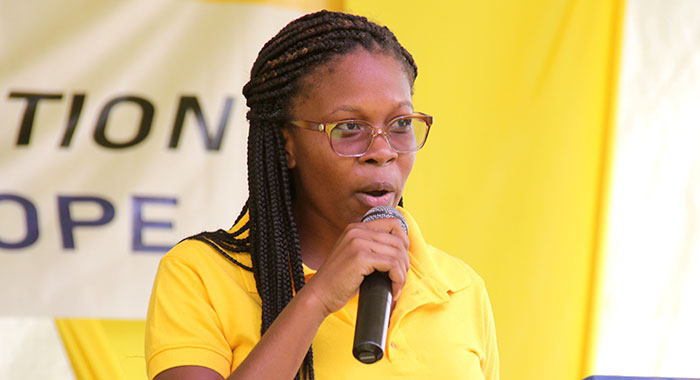 Public Relations Officer of the main Opposition New Democratic Party, Lavern King on Thursday appeared to take a swipe at PRYME, a programme under which the government is giving grant funds to young entrepreneurs.

“I refuse to accept that whenever it is an election year that somebody comes and try to prime me up only for my vote and then forget about me after that. I refuse to accept it because I know that we can do better in St. Vincent and the Grenadines,” she said at the NDP’s virtual public meeting, broadcast on radio and social media Thursday night,

The Promoting Youth Micro Enterprises programme, which was introduced this year, is financed by central government through an annual allocation of EC$2.4 million.

The government says PRYME will contribute to the empowerment of young people, alleviation of poverty, enablement of entrepreneurship and the creation of new businesses.

It is geared at potential and existing micro and small enterprise owners between the ages 18-40, with special emphasis on agriculture production; agro processing; light manufacturing; fisheries; services including beauticians; arts and craft and any other businesses endorsed by the steering committee and approved by Cabinet.

King said she could identify with many young people trying their best to avoid deviance, “yet still, we feel as though we can’t mek it in our country.

“Imagine trying your very best, you are not stealing, you’re not thieving, you’re not going out there and trying to be a social drop out. You are trying your best, yet still you cannot make it in St. Vincent and the Grenadines because there are no jobs.”

She said persons do what they are supposed to do, go to school, even up to the university level but remain jobless.

“They say education will help you out, yet still our country is failing to provide the mechanisms that are necessary for us to succeed.

“It is belittling to me, it is humiliating and discouraging to me to know that I can get up, go to school from [the primary to university level] and I come back to St. Vincent and I cannot get a job.

“Friends, I am not making this up. The IMF says that half of St. Vincent and the Grenadines’ youths are unemployed and that is unacceptable.”

King said she does not hide the fact that she has a student loan that she wants to service.

“I want to but I try and start my own business but there are people who say, ‘Listen, we want your services but we simply cannot afford right now because the economy is not doing good. It makes me feel discouraged.”

She said she has friends who have completed their university degrees but say they are not returning to SVG because of a lack of jobs, while others have refused to return because they can’t speak freely in the country.

“I have friends who say to me that I feel as though the state is working against me. Friends, I am saying to you this evening that the good news is, under the New Democratic Party, you have the right of association and the right to talk your mind, whether it is you are NDP, ULP or no P. And if that is not a good reason enough to vote, I am here to give you more reasons.”

She said that the NDP has said that in its first term in office, young people can access funding for their business.

“You know how humiliating that is, that you do everything that is right yet still your country is failing you?”

And, based on the NDP’s proposal, a person could save $50,000 that they can invest and bolster with more access to money from the development bank, King said.

“Friends, that is good news. It gives me hope. It gives me a reason to believe that I can stay here and raise a family someday…

King said that she, too, is happy to listen to Jamaican artistes when they visit SVG.

She was speaking in apparent reference to political parties bringing Jamaican artistes to St. Vincent for election campaign in an attempt to woo especially young voters.

King said that when she studied in Jamaica she went to quite a few reggae concerts.

“I like them, but, after the concert is over, I have a light bill to pay, I have a rent to pay, some of you have mouths to feed,” she said.

“Friends, the time is fast approaching when we have to, again, make a very important decision. The decision about who will help to determine the price of bread in St. Vincent and the Grenadines. And I want to encourage you to vote for the New Democratic Party, the party that is going to create jobs for you, the Party that will enable you to be a true entrepreneur.”