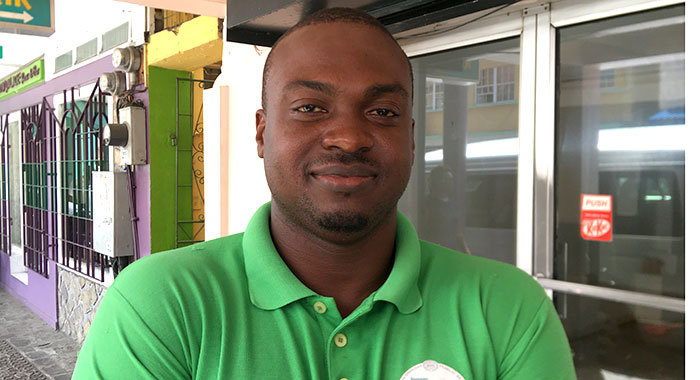 The prison warden who Prime Minister Ralph Gonsalves allegedly asked to pay half month’s salary to a hunger reduction fund or face a defamation lawsuit has called on Vincentian youth to “rebel” against Gonsalves’ Unity Labour Party administration.

“Young people, old people, but especially the young people, Rebel. Rebel against 46% youth unemployment. Rebel against being told that the NDP has no plans and cannot do better. So stay with the devil you know. Get rid of the devil. We already see the evil of these devils,” said King, 33.

“Let us exorcise them. Let us bring blessings. Dare to rebel, my people; dare to rebel.”

King called on the nation’s youth to “rebel against the illusions that they try to bring every five years to you — the illusions of grandeur that have been painted before you election after election without any real manifestation.

“Rebel against them. Rebel. Dare to stand up and say no more; you’re not fooling me anymore. Get rid of them.

King asked the nation’s youth to “rebel against fear”.

“I have been seeing too much fear. Fear stalks the land of St. Vincent and we need to get rid of it. Dare to have faith, my people; faith in change.

King said that everyone likes to feel money in his or her pocket.

“We love when we go to the supermarkets, to the stores, we can come out with plenty bags and plenty money. Let us vote for such.

“Let us be a rebel. Let us rebel and say no more to empty pockets and having to be placed on public assistance. Rebel and take back your pride.”

King said there was a time when Vincentians were a proud people.

“We were proud to earn, we were proud to thump our chests and say, ‘I work for that.’ We have people in power, bragging about the thousands on public assistance, having to crawl and come to beg.

“After hearing everybody has to return to Papa, I wonder if a lot of people know where that came from. Mr. Stalin said keep them hungry, and feed them just enough so they will keep on returning. They will forget the pain.

“We need to get rid of that. We need to rebel against this. Rebel, take back your pride and be able to provide for yourself. Be a meaningful contributor to the country and economy.

“I know every one of us want to do this. And, as Dr. Friday said, when they come, be able to say let me buy you a drink so they don’t have to come and tek out a 50 and go and talk about it because they give you some room to drink and muddle your mind.”

King called on the youth to rebel against “division and divisive politics”.

“We have too much of that going on. Our country has been split down the middle. Dr. the Honourable Godwin Friday and his team, they preach one thing: togetherness. Let us get back to the days when we were neighbours — when we looked out for one another. Let us rebel against this vindictive, divisive set of politics that we have going on here.”

King said he has faith and belief in the words of the opposition leader.

“The words of togetherness, the words of hope. I have hope in this party and in the government that is to come, because I know what we have been going through. We know the Red Sea that we have been paddling in. But pretty soon there will be an opening and we’ll be able to walk on dry land.”

He said that the nation’s youth must rebel against a government and a system that keeps on encouraging them to deny their realities.

“Reality of pain, reality of helplessness and hopelessness; reality of being broke because no food nah run; reality of victimisation and vindictiveness,” he said.

King said he has been victimised, but did not elaborate.

“But I’m standing firm, standing tall and I am rebelling against it. And I will be voting for an NDP government because I know victimisation will be thrown out the window, and it will be together now.”

He also called on the youth to “rebel against the annual nice talks and regurgitated promises that are yet to be a fruit but will never ever bear fruit.

“There will not be a fruit. It is almost 20 years and you want to tell me what — it’s a male tree? It does not blossom? It can’t bear anything? What are we doing with it? Let us chop it down. Let us replace it.

“Let our shine forth and vote for change. Vote for our future and that of our generation. Vote the key; vote NDP. And when the history has been talked about in the bright and prosperous future to come, make sure you are counted among those who can come, thump their chests and say, I made that possible because I rebelled.”

A local newspaper reported two weeks ago that Gonsalves’ lawyers had written to King demanding an apology and that he donate half of his salary to the Zero Hunger Trust Fund.

The prime minister’s alleged demands were in response to comments that King reportedly made.

However, iWitness News understands that King has received no communication from the prime minister or his lawyer.

In May, police detained King for more than 30 hours without charge in connection with a Facebook post.

9 replies on “SVG’s youth urged to rebel against ULP”