NDP women ‘not just for window dressing and guest appearances’ 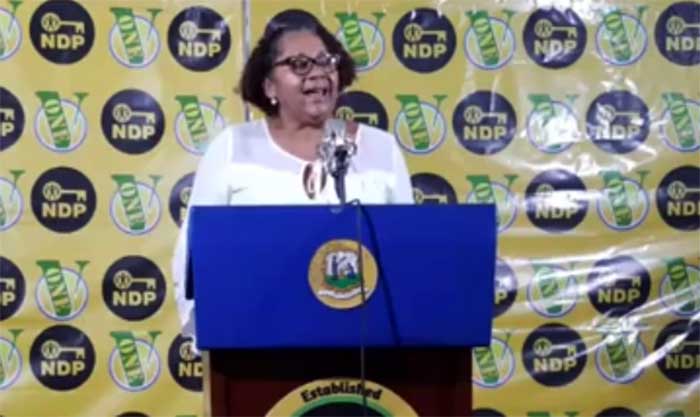 Laverne Gibson-Velox told the NDP’s Central Kingstown virtual meeting broadcast on radio and social media last week that St. Vincent and the Grenadines is falling apart, but that residents should not despair.

“This country and our people are literally falling apart, but don’t despair. Help is on the way. Hope has arrived,” said Gibson-Velox, who was manager of a local indigenous bank.

“The New Democratic Party has a team of competent women and men ready and able to serve you. Please note that I stressed women because our women are not just for window dressing and guest appearances. The women on the NDP’s slate of candidates are movers, shakers and thinkers too!” she said.

So far, one woman, lawyer Kay Bacchus-Baptiste, has been confirmed as an NDP candidate, and another, Shevern Lewis-John, a teacher, is said to be tipped to get the nod from the party’s central executive, the final screening authority in the party.

If Gibson-Velox gets the nod, she would bring the number of women candidates for the NDP to three, one more than the ruling Unity Labour Party.

“Pound for pound we have a superior team. This team is solutions-oriented. This team is prepared to work along with the people of St. Vincent and the Grenadines to empower, enrich, encourage, build, dignify and we will restore pride,” Gibson-Velox said, stressing the word team.

“This team will work tirelessly to give you the tools to be self-employed and independent.

“This team will provide the support for you to improve your current skills and even learn new ones in becoming more marketable. This team will make decisions based on merit — not party colour.

“We frequently talk about leaving no child behind; this team will leave none of its citizens behind. Work with us as we work for you, your future and the future of generations to come. Trust our team. We say what we mean and mean what we say! It starts here. It starts now!” she said.

Focusing her attention on the nation’s youth, Gibson-Velox said it is the responsibility of any sitting government to source and provide opportunities for higher education to its citizens.

“They are not doing you a favour. Once you have the necessary qualifications and have met the required standards, you are eligible for selection,” she said.

You are under no obligation to vote for a party because you received a scholarship or a bursary. Educating our citizens is necessary for growth. Weigh your options and choose wisely. You are the future of our country and you have to step up and let your voices be heard,” Gibson-Velox said.

“Team NDP wants to hear from you. You are pivotal to your country’s development. Let’s start the conversations. Let’s create templates, let’s draw maps, let’s chart the course forward to becoming the best possible SVG. Because? You matter! Your choice matters!”

She said that a significant number of Vincentians who truly love St. Vincent and the Grenadines but did not vote for the ruling Unity Labour Party “feel like we’re in bondage.

“We’re not free to live as well as our neighbours because we exercised our right and voted NDP.  Our children are not considered for scholarships because their parents made a choice to vote NDP.

“Our clinics, schools and roads are in deplorable condition because the people elected have become complacent and forgot that we, the people, matter!

“They forgot that we, the people, are the reason they formed government by virtue of our vote! I say our vote because we are all affected by the indifference meted out to us. We are not being taken care of.”

Gibson-Velox asked if this was good governance.

“For those of you who voted the others: is this what you voted for? Is the deplorable state of our country, as it exists today, what you expected in return for your vote?

Can you look yourself in the mirror and say you made the right choice with your vote? Be honest now…I think we all know the answers.”

She said that the NDP has “the better vision for our country’s future”.

“For those who say the NDP has no vision, I say to you there are none so blind as those who refuse to see and if you’re not listening, you will never hear! The message of our team is clear. Please listen carefully because you’re included in our plans too,” she said.

“The NDP’s tent is huge enough to accommodate you…this is an open invitation for you to come join our team in fostering One Nation, One People, One Vincy,” she said, quoting the slogan of NDP president, Opposition Leader Godwin Friday.